Here's proof that no matter what Corbyn says or does, the establishment media will attack him - Canary 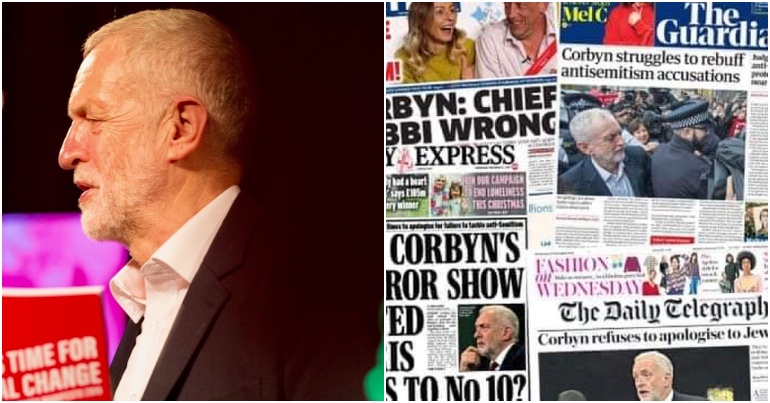 Media bias against Jeremy Corbyn is unprecedented. He’s been described as the most “smeared politician in history”. One 2016 study found that 75% of all press coverage factually “misrepresents” the Labour leader. And new analysis shows that it really doesn’t matter what he says or does, the establishment media will attack him anyway.

no matter what Corbyn does or whatever position he takes, his critics will attack him – even if they totally contradict themselves.

So for example, the Guardian reported in 2016 that Corbyn “mounted a forceful defence” of EU immigration. Yet it still claimed that this ‘split the shadow cabinet’. By 2018, however, his statement to limit multinationals “importing cheap labour” and undercutting UK workers led to accusations that he ‘echoed Nigel Farage’:

And Millar lists a meticulous body of evidence that highlights the extent of this establishment media ‘game’. Often, the same commentators totally contradict themselves:

Meanwhile, many of Millar’s examples highlight that it really doesn’t seem to matter which outlet prints what first, others will contradict Corbyn’s position. And the supposedly left-leaning Guardian is one of the worst culprits:

Corbyn is set to lead Labour into electoral oblivion: https://t.co/2au0FhXX5M

Corbyn is failing by not winning an electoral landslide: https://t.co/eKhfwswY0H

In fact, it doesn’t matter what position Corbyn is deemed to take. Because according to the establishment media, he can’t ever be correct:

Corbyn's problem? He is too radical ('Communism' added to URL, when not relevant to story) – Andrew Rawnsley: https://t.co/rKOs3gtWmG

The Media Reform Coalition (MRC) highlighted in its Who Owns the UK Media in 2019? report that alarmingly few people own the UK press. Following up from analysis in 2015, it found that:

just three companies (News UK, Daily Mail Group and Reach) dominate 83% of the national newspaper market (up from 71% in 2015).

And that stranglehold got even tighter when the Daily Mail‘s billionaire owner bought yet another newspaper. Corbyn also challenged this directly:

The billionaire owner of the Daily Mail, the Viscount Rothermere, has bought @theipaper.

Two billionaire press barons now own half of the top 10 daily newspapers.

Remember this when they attack Labour's plan to make the super-rich pay their fair share.

As The Canary has reported for some time, the supposedly impartial BBC is equally to blame. And ITV‘s no better in much of its political coverage either.

Corbyn’s eyes, however, are wide open to it all. As he told The Canary, mainstream media outlets follow a “herd instinct” and “comment on things rather than report on them”.

But it’s still a very dangerous game. Because, as the London Economic reported:

If our mainstream press has become a propaganda machine for the right-wing, it’s no wonder that the first openly socialist leader Britain has had in twenty years has been the victim of perhaps the longest continuous smear campaign ever seen against a politician in the UK…

No other politician in the UK has faced the sheer volume of smear that Corbyn has.

In the midst of the most important general election of our lifetimes, the anti-Corbyn propaganda machine has gone into overdrive. But people have noticed. Over 11,000 people shared Millar’s thread, for example, and grassroots supporters continue to harness the power of social media to bypass mainstream outlets.

The Labour manifesto, meanwhile, has promised major media reform. So now, it’s up to all of us to vote Corbyn in. Because those reforms can’t come a day too soon.

Featured image via Amanda Walsh (with permission) and Double Down News