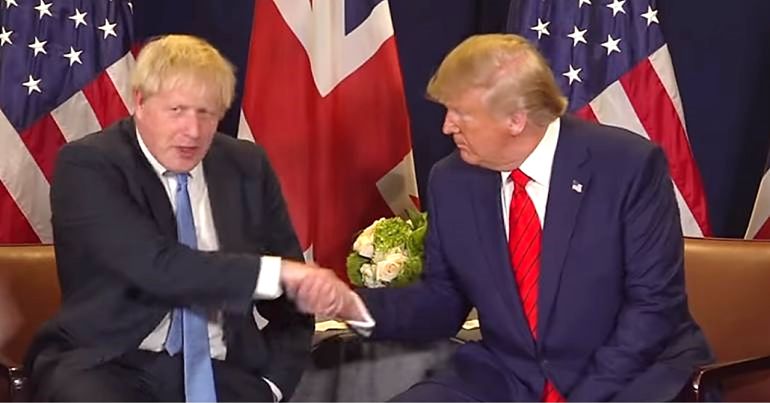 Late on 2 December, US president Donald Trump arrived in the UK to begin a three-day visit and to attend a NATO summit. But try as the US ambassador did to welcome his president and first lady, people were clear how they felt about his visit and the NHS. Because no sooner had air force one landed at Stansted airport, than people began to react online:

Have they gone yet?

Trump arrived in the UK at a time when there are very real concerns about the NHS. People are concerned about Conservative plans for a post-Brexit trade deal with the US. Today Trump claimed he wants “nothing to do with” the NHS. But, tweeting yesterday, shadow health secretary Jonathan Ashworth was in no doubt as to what was exciting Trump about his visit to the UK:

He’s coming for our NHS folks… only Labour will protect it. #OurNHS https://t.co/b8GzEUzB0r

And Labour leader Jeremy Corbyn made his position on the NHS crystal clear in a video shared by Ashworth:

Dear @realDonaldTrump keep your hands off out NHS – it’s not for sale pic.twitter.com/YBKc43AuZe

Johnson’s tied up in all this

And try as Boris Johnson might to keep Trump out of this UK election and to downplay their relationship, it’s far too late. Trump involved himself when he praised Johnson, calling him:

a fantastic man, and I think he’s the exact right guy for the times

He called on Farage and Johnson to “get together” as he felt they’d be an “unstoppable force”. He also said “Corbyn would be so bad for your country”.

What’s more, and despite saying the UK and US don’t get involved in each other’s election campaigns, Johnson has already said:

So when Mark Landler of the New York Times says the NHS is “almost certainly on the table” in US-UK trade talks, it’s difficult for Johnson, as PM, to separate himself from it all:

Mark Landler of @NYTimes says the NHS is almost certainly on the table in Boris Johnson and Donald Trump’s post-Brexit trade talks.

The message is short and simple

The NHS is one of the UK’s greatest achievements. And based on the contents of the leaked documents exposed by Corbyn, the proposed US-UK deal would wreck that .

But there’s a very simple way to ensure this doesn’t happen. And that’s to support a party on 12 December which has vowed to protect it.