Billionaire claims universal healthcare would 'bankrupt' the US. But the reality is quite the opposite. - The Canary 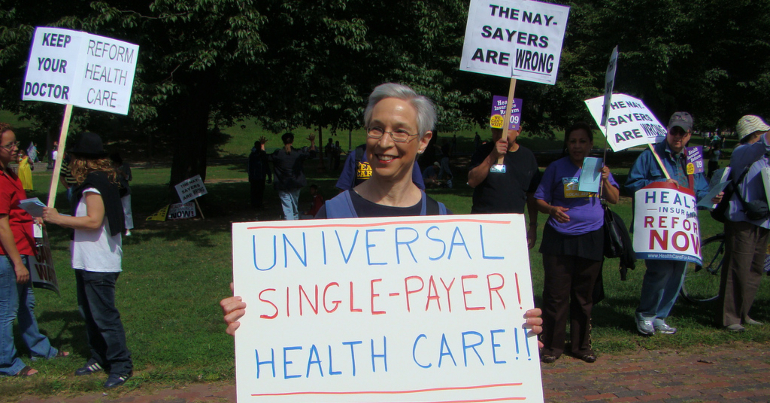 The ex-mayor of the USA’s largest city claims the country cannot afford a public, universal healthcare system. But he has things completely the wrong way round. Because in reality, only by moving toward full coverage can the US bring its soaring healthcare costs under control.

Typical right-wing scaremongering about there not being enough money

On 29 January, Michael Bloomberg – a billionaire businessman and former mayor of New York City – said that adopting universal healthcare would ‘bankrupt’ the country. He said:

I think we could never afford [a universal public system]. We are talking about trillions of dollars… to replace the entire private system where companies provide health care for their employees would bankrupt us for a very long time.

The progressive proposal, known in the US as ‘Medicare-for-all’ or ‘single-payer healthcare’, has recently gained greater traction. This has been due, in part, to the entrance of Alexandria Ocasio-Cortez and other progressives into congress.

The right, however, keeps repeating the idea that it would be too expensive. When progressive Democrats in congress floated the idea last October, for example, Donald Trump made this exact argument.

The reality is that it’s the current system that is unaffordable and unsustainable. Because the US currently spends more money on healthcare than any other developed country – about twice as much, in fact. But in spite of this, it actually ends up with worse public health outcomes.

Under the current system, the private health insurance companies have developed into monolithic paper-pushing bureaucracies, creating huge overhead costs. Bizarrely, over 25% of every dollar spent on healthcare in the US goes toward administrative costs such as the overly complicated process of billing customers. According to Physicians for a National Health Program, a public healthcare system could save approximately $150bn just from eliminating this kind of wasteful paperwork (another study puts the figure at $375bn).

Because these health insurance companies are private, profit-seeking enterprises, they have to pay dividends to their shareholders. And as is typical within US corporate culture, the CEOs of these companies receive outrageous salaries that are largely set by the board of directors – who are themselves from the shareholder/CEO class. This overhead ultimately gets passed on to the public through higher insurance premiums. Instituting a public system would largely eliminate these private companies and hit their CEOs and shareholders hard (that’s probably the real reason people like Bloomberg and Trump oppose a public system, not because they really believe it would be too expensive).

Though neoliberals vocally (yet falsely) claim that privatization leads to greater efficiency, the reality is that public ownership and operation makes sense for industries like healthcare. In a 2009 interview to promote his unsuccessful campaign for congress, labor lawyer and author Tom Geoghegan said:

Single-payer is the most efficient way of providing the care, and it’s not going to cost more. Would you rather have $2 coming out of your pocket for an insurance premium, or $1 in taxes coming out for the same quantum of care? In the end, it is fewer dollars coming out of people’s pockets. And the government is more efficient, because you’ve got a single planner that is imposing budgets on hospitals and providers of healthcare.

In the US, the cost of medication is also much higher than in comparatively developed countries. This is again because of the private insurance system. In the UK, the National Institute for Health and Care Excellence determines whether a drug should be made widely available on the NHS. For drugs that it approves, it then negotiates prices with the pharmaceutical companies on behalf of the entire British public. In the US, on the other hand, each private healthcare provider has to go through this process individually on behalf of their policy-holders. Since private companies don’t have the leverage that governments do, they are unable to bring down cost in the same way that the UK and other European countries can.

Clearly, the US has some catching up to do. The European (and Canadian) way of doing healthcare is undoubtedly better. The only thing standing in the way of reform is billionaires like Bloomberg and Trump who pull the wool over the public’s eyes for their own self-interest. And the trick has worked so far. But as the growing progressive wave is showing, that might not be the case for much longer.