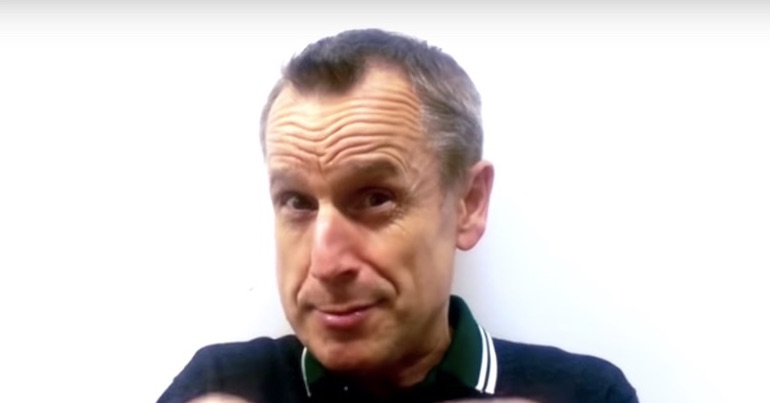 Sadly, it was reported on 1 February that comedian and activist Jeremy Hardy had died. Since then, tributes have poured in to honour and celebrate his incredible work. Because as well as his wit and comedic brilliance, Hardy also worked tirelessly on vitally important political issues.

Hardy was a fierce anti-war campaigner. After the release of the Chilcott report in 2016, which examined the UK’s role in the Iraq war, Hardy truly did speak truth to power. At an anti-war demo, Hardy summed up how many people felt, and feel, about Tony Blair:

It’s time for him to shut up and leave us alone… I hope… Blair will jump off a boat so we don’t have to send him to the international criminal court.

Here is Jeremy Hardy dropping truth bomb after truth bomb on Tony Blair & Alistair Campbell after the release of the Chilcot Report. A man who spoke truth to power. Rest in power. pic.twitter.com/dzCRknzESC

Jeremy Hardy didn't become more left-wing as he got older. It just felt like he did because other "alternative" comedians sold out. Jeremy Hardy ripping the piss out of Tony Blair will always be funnier than Robert Webb sneering about Jeremy Corbyn's coat. pic.twitter.com/uN6D7eEtRD

He fiercely opposed nuclear weapons, including Trident. As he wrote in Red Pepper in 2016:

We could make millionaires of all those employed on Trident and still have money left over to turn Faslane into affordable housing.

In a film recorded for Campaign for Nuclear Disarmament (CND) Hardy showed perfectly how to combine comedic genius with vital political issues saying:

We're very sad to hear Jeremy Hardy has died. Always funny, always friendly, always fighting for good causes and a member of CND over many decades.

This video sums it up. We rang him to ask for his help and half an hour later he popped into the CND office to record this. pic.twitter.com/xvavDlbJ6C

Hardy was also “an ardent critic of the Israeli occupation and a champion of Palestinian rights”.

British comedian Jeremy Hardy has passed away. He was an ardent critic of the Israeli occupation and a champion of Palestinian rights, "You’ve got the longest occupation in history and the largest refugee population in the world and nothing is being done." pic.twitter.com/FiW20tjYGD

As Middle East Eye said, he was “Palestine’s funniest champion”:

The film, Jeremy Hardy vs the Israeli Army – saw the comedian facing down Israeli gunfire and eventually become trapped along with six other British activists in Bethlehem as the town was placed under siege by the Israelis https://t.co/zEGZMU0qm0

Hardy didn’t just speak about Palestine. In 2002, he travelled there to make a film called Jeremy Hardy vs the Israeli Army. During filming, he faced Israeli gunfire and was “trapped along with six other British activists in Bethlehem as the town was placed under siege by the Israelis”.

I remember talking to Jeremy in the pub after I’d watched him doing a gig to celebrate Corbyn becoming leader. “Blimey, I suppose we’ll have to join the Labour Party now,” he said.

And when the news of Hardy’s death broke, Corbyn paid a touching tribute:

Jeremy Hardy was a dear, lifelong friend. He always gave his all for everyone else and the campaigns for social justice.

Shadow chancellor John McDonnell also gave a brilliant reminder of some of the other political issues Hardy supported:

Saddened to lose our good & loyal friend Jeremy Hardy. As well as being a brilliant comedian, whenever the call for solidarity went out, Jeremy courageously supported campaigns for social justice from the Guildford 4, the miners strike to the plight of refugees. We all loved him.

CWU, the Communications Union, called Hardy a “giant of the movement”. It shared another clip of Hardy using his comedic skill to point out just how ludicrous and foolish privatising national companies really is:

Fellow comedian Sandi Toksvig summed Hardy up in her tribute. She said he “was a political activist who never wavered in his beliefs, no matter what path the rest of society was taking”:

Hardy’s warmth, wit and wisdom will be sorely missed. Not only was he so brilliantly funny, he never stopped speaking truth to power. Rest in Peace.