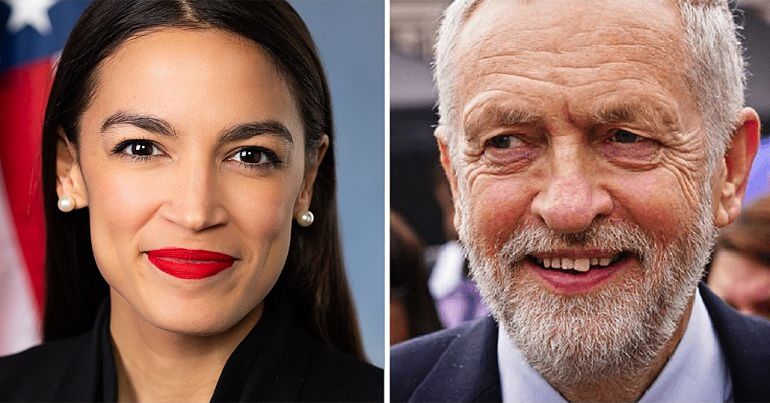 Alexandria Ocasio-Cortez and Jeremy Corbyn discussed a “movement across borders” over the phone on 3 February. The Labour leader tweeted:

Great to speak to @AOC on the phone this evening and hear first hand how she’s challenging the status quo.

Let’s build a movement across borders to take on the billionaires, polluters and migrant baiters, and support a happier, freer and cleaner planet.

In the UK, Corbyn is proposing solutions to inequality and the environment instead of scapegoating people from abroad. The Labour manifesto offers a rollout of publicly funded, locally run renewable energy firms across the UK. And the party pledged to exempt 95% of earners from tax increases.

Over in the US, Ocasio-Cortez has shaken up the Democratic Party with her flagship proposal for a “Green New Deal”, which seeks to create jobs through state investment in a renewable energy revolution.

It was an honor to share such a lovely and wide-reaching conversation with you, @jeremycorbyn!

Also honored to share a great hope in the peace, prosperity, + justice that everyday people can create when we uplift one another across class, race, + identity both at home & abroad. https://t.co/7qnz42I8du

Ocasio-Cortez and Corbyn discussed cooperating to promote a fair tax system, investment in public services, action on climate change and ending the hostile environment for people moving across borders.

During the 2017 UK election, staff from Bernie Sanders’ team played key roles in helping the Corbyn movement mobilise. Collaborating with Momentum, Boston native Erika Uyterhoeven helped implement technology such as My Nearest Marginal – a crucial website that enabled Labour supporters to carpool and campaign in the nearest winnable seat.

News of Ocasio-Cortez and Corbyn working together will be music to the ears of those seeking real change in the UK. Let’s hope there’s some powerful transatlantic collaboration in the future, both online and in the physical world.