Wetherspoon workers are fighting back against Brexit propaganda - The Canary 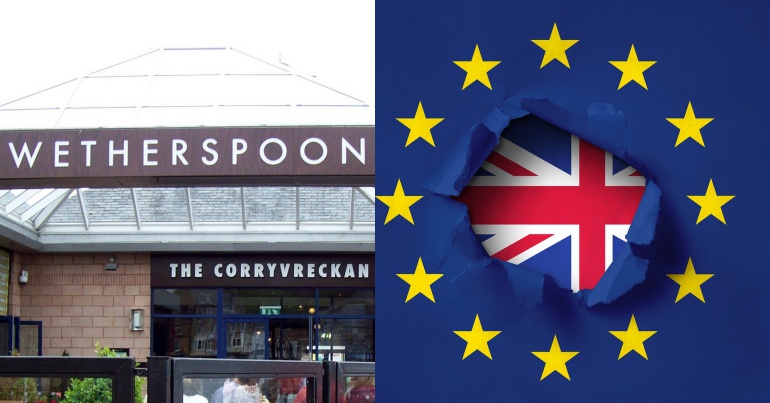 Workers at Wetherspoon pubs across the country have united to form a group called Spoons Workers Against Brexit. They’re standing up to demand fairer working rights and conditions. They’ve also refused to share hard-Brexit propaganda from Wetherspoon founder and chair Tim Martin.

On 27 January, workers shared a manifesto on Facebook and Twitter. The group said it was “disgusted” by Tim Martin who it feels “is exploiting his position to promote an extremely damaging no deal Brexit through pubs up and down the country”. It explained that:

he forces staff members to distribute propaganda in favour of a hard Brexit – something which would drive down our working conditions and living standards even further. More or less any Brexit currently on offer will see an end to freedom of movement and the rights of EU working class people, including many of those who keeps [sic] Wetherspoon running, to travel freely, and it will almost certainly lead to thousands of EU nationals being refused the right to settled status here.

In August 2018, Martin issued a pro-Brexit beer mat for distribution in his 875 pubs across the UK. He’s also been delivering the pub chain’s 100-page magazine directly through letterboxes:

This thread dissecting Martin's nonsense is definitely worth a read 👇 https://t.co/jWyCWbA6cV

The group made a powerful point to challenge pro-Brexit arguments against immigration. It explained that several studies challenge links between immigration and low wages because:

Migrants don’t drive down wages; but wealthy, exploitative bosses like Tim Martin do.

As it said, Martin is an “incredibly wealthy man” with a “net wealth of almost £500m”. Yet his staff earn “poverty wages”, according to the group, and many work on zero-hours contracts. In 2018, staff in some Wetherspoon pubs took strike action to demand fairer working conditions.

As one Wetherspoon worker wrote in the Independent, “Martin’s propaganda” totally ignores “the implications” of Brexit for the “30,000+” Wetherspoon staff who are EU nationals. And yet these are the “migrant workers who keep his company running”.

“Withdraw all pro-Brexit propaganda from our workplace”

Workers have issued three “simple” demands to Martin and the JD Wetherspoon chain.

1. Withdraw all pro-Brexit propaganda from our workplace. This means that we will no longer be marked down for refusing to distribute beer mats, leaflets, magazines or menus that promote Martin’s politics.

In a recent interview discussing Brexit, Owen Jones asked Martin if he was “part of the very elite which plunged this country into crisis”. Jones continued:

The truth is, you are yourself part of the elite, you’re a very wealthy man and many of your workers are on poverty wages.

Martin replied that this was “silly”. He clearly didn’t have a clue how much his workers were actually paid and said it was a “childish interview”. Martin also laughed about the fact that his workforce is forced to live on poverty wages.

Wetherspoon workers have, understandably, hit back at Martin’s propaganda drive. They’ve also drawn attention not only to their abysmal working conditions but the flawed and dangerous anti-immigration lies that Martin and others rely on.

So all solidarity with these workers.