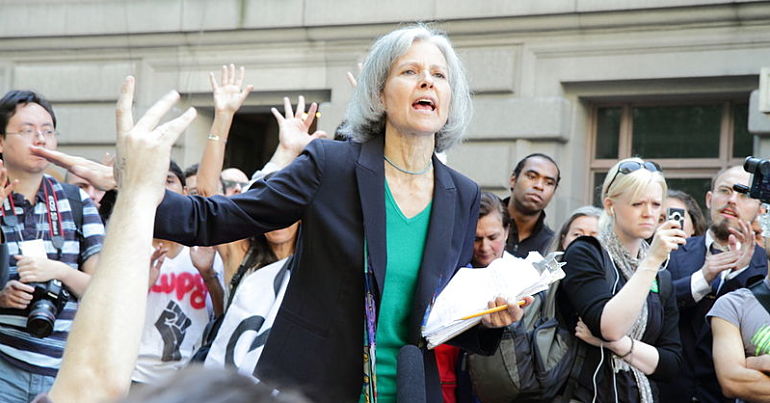 Stein’s Twitter feed has been full of crushing criticism of the US-backed coup attempt in Venezuela:

For over a week Team Trump has been blatantly pushing a coup in #Venezuela, & it’s getting worse. Only a handful in Congress have spoken against intervention. Where are the anti-war Democrats & Republicans? We need opposition to sanctions, intervention & war NOW. Not in 5 years

In particular, she called on people to remember the propaganda blitz leading up to the illegal and disastrous invasion of Iraq:

When you think back to the lead-up to the Iraq War, do you wish we had fought harder to stop the slaughter? Now's our chance to do that as Trump's gang pushes #Venezuela towards a bloodbath. Expose & resist these warmongers NOW! #NoMoreWar

And she noted the centrality of US oil interests in the region:

What could Donald Trump possibly want out of Venezuela? 🤔 pic.twitter.com/Cfgy0TbErA

Venezuela is in crisis. But like the run-up to Vietnam, Iraq, Libya and so many other bloody US foreign policy disasters, we're being bombarded with a one-sided, simplistic, often false narrative. No one claims Venezuela is a threat to us… but they do have LOTS of oil.

Stein also recalled over a century of US intervention in Latin America, its “backyard”, and insisted that democracy is asking (rather than telling) the Venezuelan people what they want:

US has backed right-wing coups up and down Latin America for 100+ years. Not one was about democracy. All have been to enrich the global elite. But we’re supposed to believe this time in Venezuela – which has the world’s largest oil reserves – is different?

What do the people of #Venezuela want?

RETWEET IF YOU STAND WITH THE PEOPLE OF VENEZUELA!https://t.co/JQdu7C2CrF

Finally, Stein highlighted the utter hypocrisy of US ‘concerns’ for human rights and democracy in Venezuela while it arms the murderous dictatorship in Saudi Arabia:

The same blowhard politicians talking about "bringing democracy" to Venezuela have aided & abetted the Saudi dictators executing dissidents, murdering journalists & starving millions of kids in Yemen. They don't give a damn about democracy or poor people's lives. It's about OIL.

She also pointed out that US democracy isn’t exactly something to write home about:

The hardline opposition chose to boycott #Venezuela's 2018 election instead of supporting moderate opposition candidates. Turnout was 46% and Maduro got 68%, meaning 31% of Venezuelan voters backed him – a higher percentage than the 25.7% of US voters who elected Trump.

Democratic representatives’ silence on US intervention in Venezuela is deafening. Though many claim to be in ‘the resistance’ to Trump’s disastrous presidency, their resistance ends abruptly when it comes to US foreign policy. The two-party war state, it seems, survives another day.

As Stein insisted, members of Congress who don’t speak out are “cowardly puppets of the war machine”:

Journalist @MaxBlumenthal asked members of Congress about #Venezuela. It's embarrassing & disgusting. While US pushes a weaker country toward civil war, our "leaders" are ignorant, indifferent & afraid to take a stand: cowardly puppets of the war machine. https://t.co/Drw8V70o9w

Stein’s straight-talking anti-war stance is a refreshing break from cross-party silence. For this, Stein will likely face further attacks by a corporate media that overwhelmingly backs US imperialism. So she deserves complete solidarity from the anti-imperialist left.