'NATO is a threat to the very survival of life on earth', says peace campaigner Medea Benjamin - Canary 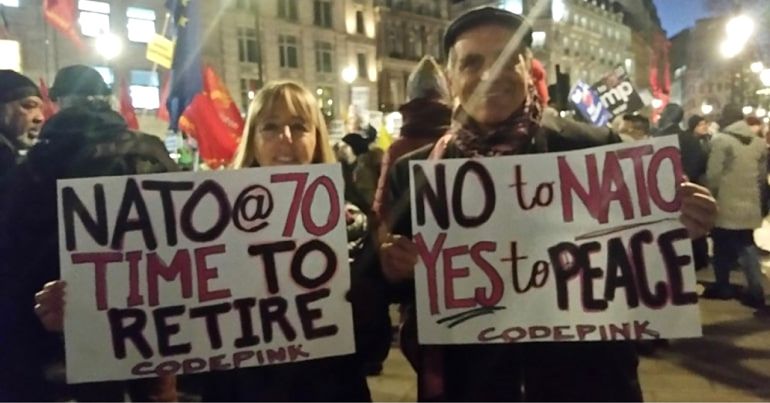 Medea Benjamin, of the US-based peace group CODEPINK, joined hundreds of people in bitterly cold London on 3 December to denounce US president Donald Trump and the western military alliance of NATO. The demonstration and speeches began in Trafalgar Square and then slowly moved to Buckingham Palace where leaders of NATO countries, including president Trump, were reportedly having dinner.

Benjamin, a veteran peace activist, told The Canary she came to the UK to ‘Say No to NATO’ because:

NATO is all about militarism and it [always] needs an enemy. Right now it is bogged down for 20 years in Afghanistan. NATO decided to overthrow Muammar Gaddafi and destroyed Libya and now won’t take responsibility for it or for the refugees fleeing from there. And NATO is looking for a new enemy. It might be Russia, it might be China, it might be some vague continuation of the ‘War on Terror’, but NATO needs an enemy because it’s a military alliance and part of the push is for countries to spend more money on the military.

Spending on militarism detracts from other priorities such as health care

Many of the signs and placards called for defending the UK’s National Health Service (NHS), opposition to austerity, and any trade with the US which would sell off parts of the NHS to profiteers. The NHS has been subject to forty years of privatisation by stealth, according to the new documentaries The Great NHS Heist and John Pilger’s The Dirty War on the NHS. And it’s in the final stages of privatisation, according to activist GP and …Heist producer Dr Bob Gill.

Benjamin said that Trump’s administration has “exacerbated” the problem of shifting money towards militarism and away from social programmes. Trump has been “obsessed with pushing countries to spend 2% of their GDP on the military” she said.

The result is that the money for increased military spending will come from “health care budgets” and “education”, Benjamin explained.

NATO is an ‘existential threat’

She said that increased military spending ‘robs’ the areas “where we really need to spend our money”, such as on a “Green New Deal to save the planet”.

“So I think NATO is a threat to the very survival of life on earth because it sucks up billions of dollars that we need to address the climate crisis”, Benjamin said, “and because it pushes an arms race including a nuclear arms race, that is an existential threat to life on this planet”.