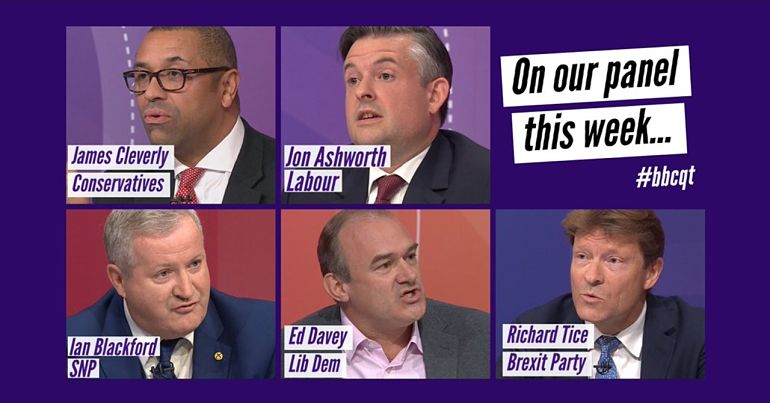 Ahead of the 5 December edition of Question Time, the BBC released details of the panel. It’s fair to say it’s led to some raised eyebrows.

Question Time has faced criticism over its panel selections before. Normally it’s to do with the political balance or the presence of Nigel Farage. On this occasion, the four largest parties at Westminster are all represented. The Brexit Party’s Richard Tice is occupying the chair normally given to an actor or comedian. The Brexit Party had no MPs in the last parliament, because it didn’t exist in 2017, and lacks a traditional democratic membership structure.

But there’s a more obvious issue with the lineup:

Were ALL of the 100s of female politicians busy?!

While Holby City’s Catherine Russell made a cutting point:

If these were all female it would be a special woman's edition.

The BBC pointed out that the Labour panellist, shadow health secretary Jon Ashworth, was a replacement. Originally, shadow business minister Laura Pidcock had been on the panel, but had to pull out.

But this did little to pacify people:

Another #manel. That's what happens when you only have one woman and four men in the first place. Not good enough.

On discovering the all-male nature of the panel, Ashworth did the one thing he could and withdrew. Shadow treasury minister Anneliese Dodds will represent Labour on the programme.

I had no idea it would be an all male panel when I agreed to do @bbcquestiontime.

I don’t believe it should be an all male panel tonight, so my brilliant friend @AnnelieseDodds is heading to Hull to represent @UKLabour instead of me. She'll be a fantastic voice for Labour. https://t.co/XFeyIjMhzK

It’s a worry that the BBC ever thought an all-male panel would be acceptable, even as the result of a late change. Even Boris Johnson claims to be a supporter of equal representation. That’s a low bar. But Tice’s recent behaviour suggests the BBC wouldn’t have faced complaints from him about the all male lineup. He looked less than comfortable being challenged by Nicola Sturgeon when he took part in a BBC debate and was placed next to her.

Question Time is one of the BBC’s flagship political programmes. It’s under tremendous pressure. It needs to stop shooting itself in the foot with spectacular gaffes like this.