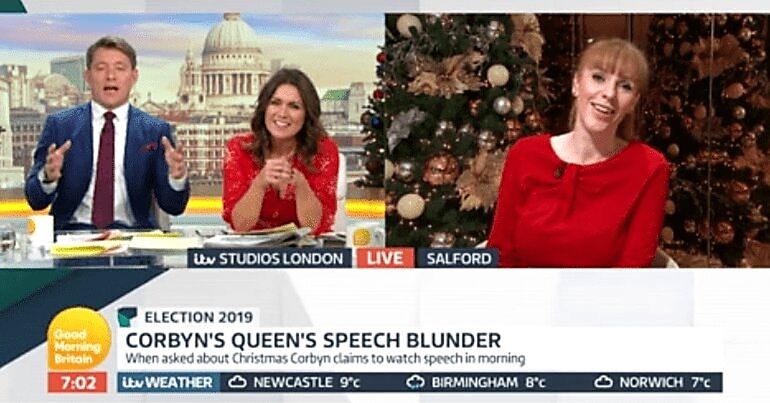 This is clutching at straws

Angela Rayner dealing with an utterly fuckwitted interview the way it deserves. More of this! pic.twitter.com/60dFKhCUBP

You’ve played clips that you’re saying that because Jeremy Corbyn said he watches the Queen’s speech in the morning, which by the way he could do on catch up, you’re suggesting that means that he’s unreliable and untrustworthy. But Boris Johnson is trustworthy because he’s suddenly said that the NHS isn’t up for sale and Donald Trump has… they’ve both said in the past that the NHS… could be part of trade deals, and yet you’ve not played any of those clips. So I think that’s not very balanced.

Of course they want to sell off the NHS

On ITV, the education secretary brought the debate back to real policy issues such as the oncoming Conservative privatisation of the NHS. The Conservatives deny that they are either privatising the NHS or that they plan to, with Johnson branding it a ‘UFO conspiracy’. Yet, in June 2019, before it was an election issue, Trump said the NHS is “on the table” in a US/UK post-Brexit trade deal.

But voters do not have to rely on words. There is clear evidence the Conservatives have long been privatising the NHS by stealth:

Rayner is right to push this issue. Unless Labour wins this election, UK and US healthcare hawks will start making a killing off our sick relatives, friends and neighbours. Huge levels of private sector profit mean the US is spending about 17% of its GDP on healthcare. That’s over double what the UK is spending and the US doesn’t nearly cover everybody.

The ‘Corbyn Queen speech’ line is nothing but a distraction. We live in a country where landlords make £50bn per year from rent, where corporate tax dodging costs us £104bn per year and where government handouts to huge corporations lose us £180bn annually. That’s well over £300bn per year of free money for the already rich. Meanwhile, thousands of people are dying as a result of austerity cuts, which academics at Lancaster University have called “social murder”. The fact the media is going on about trivial matters like whether Corbyn watches the Queen’s speech tells you everything you need to know. As Rayner points out, they are desperate to shift the narrative. They are terrified of the electorate this election.