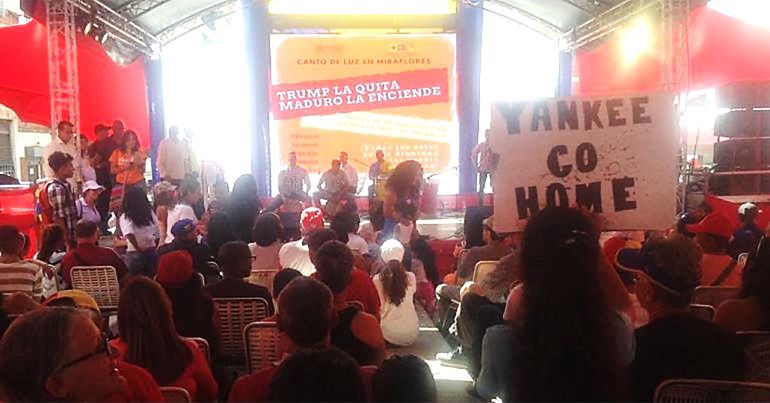 Following on from this month’s failed coup attempt against Venezuela’s elected government, The Canary spoke to journalist Anya Parampil about her article Silvercorp co-founder speaks with The Grayzone: What did State Department know about failed Venezuela invasion? And for her, the attack highlighted why further US escalation against Venezuela would be a big mistake.

Background to the coup attempt

At the time, the United States was actually attempting to invade Venezuela under the guise of humanitarian aid. We filed a report at The Grayzone explaining how US-backed hooligans ended up setting that aid on fire and attempting to blame it on the Venezuelan government. We were later confirmed or supported by reporting in the New York Times.

But… some people look at that situation and say ‘Jordan was doing that security. It means that he was directly planning this with the White House.’ There is a report in AP that said he was meeting with one of Trump’s personal bodyguards, Keith Schiller. And then there are other people who say: ‘Oh, that’s just a coincidence. This is just a crazy guy who was motivated by the desire to make money and put this ragtag team together and tried to invade Venezuela, but with no help from the United States government.’

Difficult to prove firm link to US government

She continued by stressing:

I personally believe that simply because Jordan did security for Trump rallies or that he had conversations with a Trump bodyguard – I don’t think that proves that he was anybody. There are a lot of ex-military, security… guys who do events for the White House and make connections with people in Washington and try to make themselves into someone. And I think that’s what Jordan was. … judging from what his friends have told me too, I think he was connected with figures in Venezuela’s opposition when he… did security for that concert in Bogota; and then, that somewhere along the way, I still do believe that he absolutely was coordinating with people in the US government who were using him as sort of a useful idiot to put up the men and the front for this operation. …

And the only reason that I don’t believe that it was an operation that went all the way to the top is because of all of the failed uprisings and attempts that [coup leader] Juan Guaidó has already attempted to lead in Venezuela. We know from reporting in the United States that the Trump administration kind of lost an interest in Venezuela and in Guaidó as a result of that.

But I still believe there are people working… on the national security team in the State Department who would really like to see the situation ignite and blow up again. And this was a perfect way for them to achieve that goal.

Why did the coup attempt fail?

The question is, then: why was it such a mediocre, poorly-planned operation? It gave the United States cover to say: ‘Well, if we’d done this, it would have been way more slick. It would have actually worked.’ But… I don’t really buy that because – look what they did last April when Juan Guaidó tried to start a military uprising in the country with just thirty-some soldiers in… the capital, Caracas. It was a complete disaster. The US government isn’t as effective sometimes as we think it is.

But… what was achieved with this operation was at the very least a test. In fact, one of the Venezuelan opposition figures [Juan José Rendón] who coordinated with Jordan Goudreau and who spoke with the Washington Post described this operation as a test balloon, saying that they were going to get an idea of how many men they would need to do something more serious. And I think in Jordan’s mind he thought: ‘Alright. I can do this. And if I am successful, I’ll win more contracts, I’ll win something way more serious with the Trump administration. I’ll prove myself to everyone and then I can do who knows what …’ …

even though it failed, … it went through in the end … because it did test the strength of Venezuela’s military. That’s something the United States… they’re constantly claiming they can turn all of these soldiers. I remember when John Bolton was national security advisor, he would tweet all the time at Venezuelan soldiers trying to get them to defect and betray their country. … the attemptedinvasion of Venezuela last February was another attempt at testing the strength of the armed forces.

‘US escalation would be a mistake’

what we’ve seen, once again, is that not only is Venezuela’s military very united in the face of these outside attacks: they successfully arrested and sabotaged the entire operation. But Venezuela’s intelligence services are also quite advanced.

She quoted Venezuelan government figure Diosdado Cabello (who’s got a popular weekly TV show), for example, saying authorities had “infiltrated” the coup plotters’ meetings – something Goudreau confirmed. And she added:

so that also is an important factor now to count in if you’re the United States. Not only were you confronted by a group of Venezuelan fishermen, but Venezuela’s intelligence services really appeared to successfully infiltrate the operation and prove that they’re quite strong. And so it would be a mistake for the United States to escalate from here.