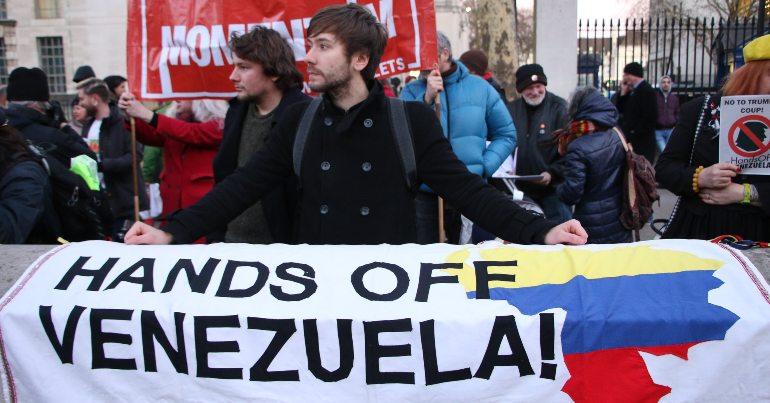 A new coup attempt in Venezuela has failed, right in the middle of the coronavirus (Covid-19) pandemic. And it shows just how bizarre the longstanding regime-change efforts have become.

In January 2019, a US-backed coup attempt against the democratically-elected government of Nicolás Maduro began in Venezuela. The plan soon stalled, with US-anointed leader Juan Guaidó failing to seize power. By late 2019, the whole episode had degenerated into a farce, with more moderate factions of the Venezuelan opposition cutting ties with Guaidó and instead entering into a ‘peaceful coexistence’ agreement with the government.

In recent days, however, the depths of desperation on the part of the coup-plotters became crystal clear when an attempted sea invasion, allegedly carried out by US and Colombian mercenaries, was foiled by Venezuelan authorities.

Plot foiled – but who was the mastermind?

On 3 May, Venezuelan officials announced that security forces had captured several speedboats and some of those onboard near the coastal city of La Guaira. Believed to have originated in neighbouring Colombia, the government initially said that eight of the participants had been killed, although reports later revised the number to six. Over a dozen more alleged perpetrators were captured, including two former US ‘Special Operations’ soldiers.

On 3 May, Jordan Goudreau, the operator of a private military company called Florida Silvercorp USA, claimed responsibility for the attack. He is now reportedly spilling the beans about Guaidó’s alleged involvement, apparently as payback for lack of payment from the coup-plotter and his backers. Guaidó has denied having anything to do with it, but documents leaked to the press by Goudreau reportedly prove that he and his political faction were involved in planning the attack. This apparently includes an eight-page ‘General Services Agreement’ between the co-conspirators, and also a recording of a phone conversation in which they believed to be signing the document.

The world's most foolish self-proclaimed "president" @jguaido tried to deny the whole thing as a gov't propaganda operation. Unfortunately for him, a video of an alleged conference call surfaced, showing him talking to Goudreau before signing the contracthttps://t.co/JDg6LCMVBr

The Trump administration has denied that the US government was in any way involved in the coup attempt. On Goudreau’s company website, however, he claims to have “planned and led international security teams for the President of the United States as well as the Secretary of Defense” (though this might be an exaggeration). US tacit approval of, active involvement in, or even orchestration of such activity, meanwhile, would hardly be unprecedented.

As The Canary has previously reported, the US government has a long record of interference in other countries’ affairs, especially in Latin America. In the 1970s and 80s, for example, Washington backed dictatorships across the region that engaged in torture, kidnappings, and extrajudicial killings. One of them, the Pinochet regime in Chile, was even brought to power via a US-orchestrated coup. Around the same time, the Reagan administration launched a series of wars in Central America. Ever since the Cuban revolution in 1959, meanwhile, Washington has been involved in countless acts of terror against the impoverished island nation.

…and it wouldn’t be the first time

This is a pattern that stretches back over a century. As Greg Grandin explains in his book Empire’s Workshop: Latin America, the United States, and the Rise of the New Imperialism:

From the mid-nineteenth to the early twentieth century, the U.S. military sharpened its fighting skills and developed its modern-day organizational structure largely in constant conflict with Latin America.…

by 1930, Washington had sent gunboats into Latin American ports over six thousand times, invaded Cuba, Mexico (again), Guatemala, and Honduras, fought protracted guerrilla wars in the Dominican Republic, Nicaragua, and Haiti, annexed Puerto Rico, and taken a piece of Colombia to create both the Panamanian nation and the Panama Canal.

With the above in mind, there is a cruel irony about this latest incursion against Venezuela. Statements by President Maduro and his predecessor Hugo Chávez about how their government has been under constant attack have been ridiculed by Washington and its mouthpieces in the corporate media as crazed delusions and/or propaganda strategies to strengthen their position.

But based on this latest attack and historical analysis, it seems that they were right all along. Even the Washington Post commented “Maduro may have a point” about the threat of US intervention in the context of this latest episode. Though the US government and its puppet Guaidó have so far denied having a hand in this latest escapade, history shows conclusively that it would hardly be out of character.