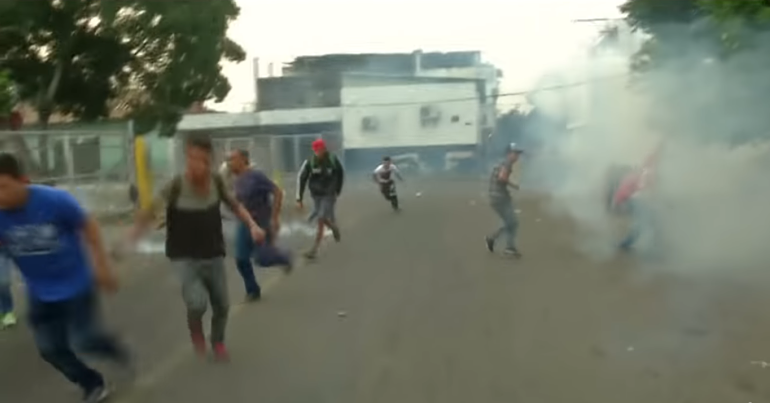 Ahmed Kaballo is a Sudanese-British activist and journalist. He spent six weeks reporting from Venezuela, during which time he offered a critically different version of events to those being reported in the corporate media.

Kaballo was in Táchira on the Venezuelan-Colombian border between 23 and 25 February. He spoke exclusively to The Canary about how the US tried to force ‘humanitarian aid‘ trucks onto Venezuelan territory.

Kaballo began by speaking about 23 February:

I flew out on Saturday, the morning of 23 February. We tried to get close to the border at around 9am, but because of the violence that had already happened, it was hard to get there.

Absolute #chaos on the border not only was it totally predictable but planned for by the most right-wing fanatical cabinet that the White House has ever produced. And that's saying something.#HandsOffVenezuela#YankeegoHome pic.twitter.com/HoAozF7NBn

On 24 February, I got to Simón Bolívar bridge, and there was a massive congregation of pro-government supporters doing speeches and playing music. Then, at midday, as if it were a scheduled football match, all these masked-up guys came from the Colombian side of the border. They were throwing these big stones, and the stones then turned to Molotov cocktails, and the people who were at this concert were coming to verbally support their government forces.

The battle was happening on the bridge, but on the side of the bridge, people were there watching. It was strange because they were throwing stones and Molotov cocktails, and then the Venezuelan military would fire tear gas and everyone was cheering them on, just like it was a football game. It was like this back and forth where the soldiers would throw tear gas, the guys would throw stones.

He spoke about the behaviour of the Venezuelan military:

I didn’t understand the tactic from the Venezuelan army. They’re standing there basically like a battering ram – they’re not advancing, they’re not going forward. These youths throwing stones aren’t going to get bored anytime soon.

And you could see in the distance Colombian soldiers on the other side of the bridge. And I thought: in what world would you allow young guys, masked up with stones and Molotov cocktails, to walk past you and throw them into another sovereign nation?

I was on #SimonBolivar international bridge connecting #Venezuela and #Colombia. #Thread

1. The '#humanitarianaid volunteers' were violent and masked up, unlike any humanitarians I have ever seen.

They also appeared to be aided (no pun intended) by the Colombian authorities. pic.twitter.com/rNCmg6ELdD

This is how the community was involved: they were there telling the Venezuelan military that people were coming under the bridge. There were these old women – they call them the ‘Chavista ladies’ [supporters of the government]. They’re mothers of some of the sons that were killed during the Caracazo violence [an uprising in 1989 against the neoliberal government of the time]. They were coming up to the bridge, clearing the stones away, giving the soldiers water.

Kaballo continued by talking about 25 February:

Monday was when the most interesting stuff happened. I spoke to some of the soldiers off-camera, so they could tell me their opinion. I said: ‘You know the media’s reporting this as ‘humanitarian aid’? What do you think about that?’

They said: ‘We’ve been fighting with these guys all day. They’ve been throwing everything at us. There’s no way these are ‘humanitarian aid volunteers’. He didn’t say this with a smile, of course; he looked really pissed off. One of the generals was walking with a limp.

He spoke about events on Santander bridge:

As I was saying to you about Sunday 24 February, I was questioning why the Venezuelan military wasn’t advancing.

On Monday, I was filming on the bridge, and suddenly the Venezuelan soldiers told me: ‘You need to get off the bridge’. I stood to the side, and all of a sudden the Venezuelan army in unison just went for it; just charged right up to the Colombian border. They were firing into Colombia – not live bullets, but loads of tear gas and rubber bullets.

And all these youth just scattered off the bridge. I ran back onto the bridge and I was amongst the military filming. And then I see all these Colombian soldiers running towards us, and I think: ‘Shit, what’s gonna happen here?’

The Colombian soldiers then started giving the young kids clips around the head – to say like ‘go now’. The youths didn’t leave just randomly. It shows to me that they were taking orders. Because they commanded them to leave and they all just disappeared.

Then the Colombian soldiers – maybe this is my own biased interpretation – but it looked like, from their faces, that the Colombian soldiers thought all of this was bullshit as well. They didn’t look like they wanted to be there; like ideologically, they thought ‘these guys are using our border to attack our fellow brothers, on Simón Bolívar bridge – the liberator of both countries’.

The Venezuelan and Colombian generals finished their chat, and the Venezuelans did their chant: ‘Always loyal, never traitors’. They put their fists in the air and walked back as if they’d just won a victory.

Kaballo finished by talking about the ‘burning aid‘ story:

By 25 February, the media was already saying that Venezuelans had burned the ‘humanitarian aid’ trucks. But I knew that wasn’t true because I’d already seen the people on the Colombian side throwing Molotov cocktails. I saw what these ‘humanitarian aid volunteers’ were doing. And I also saw the video evidence a little later; the evidence it took the New York Times almost three weeks to show.

There were also wires and whistles left in the burnt-out trucks, which didn’t seem like ‘aid’ to me.

#Humanitarianaid Thread:
Yday before I travelled back to #Caracas I went to C the burntout trucks and buses on the border between #Colombian and #Venezuela
1. #humanitarianaid' trucks had wires and whistles in them. Any1 from the sector want to shed light on why it's necessary? pic.twitter.com/qhyw1JG3d9

After it all, I thought ‘there’s some real dishonest journalism going on here’. After seeing the reports, I thought the journalists there must have filmed away from the scene – must have told the cameraman to not pan left or right. It seemed so selective. Lucia Newman, for example, was trying to do a piece-to-camera. It seemed like she was trying to do it to show no Venezuelan government supporters. She was trying to put them out of the frame, and the people noticed – and they came into the video and started chanting. That video went viral.

Kaballo’s work highlights the importance of having different voices – i.e. not from CNN, the Guardian, or the BBC – on the ground. Because with just a mobile phone, you can change the whole regime-change narrative.