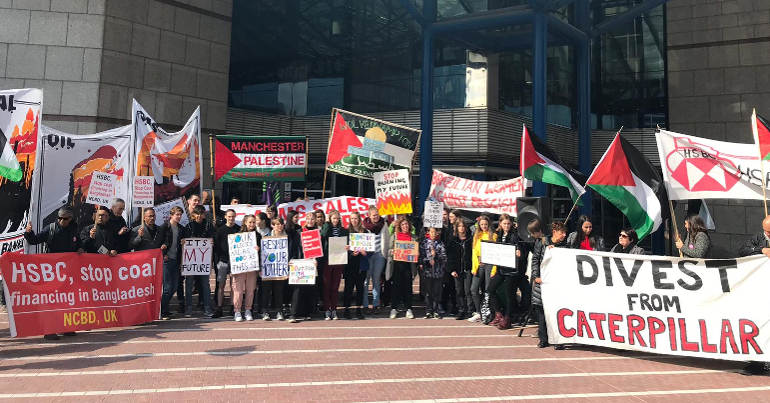 An alliance of over a hundred Palestine solidarity, anti-militarist, and ecological activists joined forces in Birmingham to disrupt HSBC bank’s annual general meeting (AGM) in Birmingham on 12 April.

The bank’s dodgy investments range from investing in weapons, to military bulldozers used in demolitions of Palestinian homes, to fossil fuels.

A press release from the protesters read:

In the last three years alone, HSBC has poured £43bn into fossil fuels, whilst at the same time investing over £830m in arms companies and being involved in syndicated loans to the arms sector exceeding £18.9bn.

HSBC invests in Caterpillar Inc, a US multinational company that supplies Israel with military bulldozers under the US foreign military sales programme. These bulldozers are used to carry out Israel’s punitive demolitions of Palestinian homes in contravention of international law. Punitive demolitions are acts of collective punishment sanctioned by the Israeli court system. The Israeli army uses Caterpillar bulldozers to destroy the homes of the families Palestinians accused of attacks on the Israeli army or colonists.

During 2018, Israel carried out at least 41 demolitions of Palestinian properties using Caterpillar bulldozers.

Late last year, HSBC divested from Israeli arms company Elbit Systems. Palestine solidarity campaigners had been holding regular protests outside HSBC branches. Campaigners are hopeful that they can persuade the bank to divest from Caterpillar too. Huda Ammori, campaigns officer at Palestine Solidarity Campaign, said in a press release:

Despite divesting from Elbit Systems following campaigning pressure, HSBC continues to invest in companies supplying weapons and military technology to Israel such as Caterpillar, which makes the armoured bulldozers used to demolish Palestinian homes and communities. Our message today is clear – HSBC must end its complicity in war crimes and military occupation, and cut ties with all companies that profit from the violent repression of the Palestinian people.

Campaigners told The Canary that several activists asked questions inside the AGM. And they asked HSBC’s directors to divest from Caterpillar.

For too long now big banks like HSBC have been pouring billions into climate-wrecking fossil fuels every year. HSBC is one of the biggest fossil fuel financiers, supporting projects that not only damage our climate but also ravage frontline communities across the world. HSBC needs to massively step up its climate ambition. Concretely that means ending its financial support for all fossil fuels.

Bangladeshi campaigners also supported the protests against the AGM. They were protesting against HSBC’s investment in coal in Bangladesh.

Last year, HSBC claimed to be taking steps to “support a transition to a low-carbon economy” by limiting its investment in new coal projects globally. But HSBC’s new policy did not apply to Bangladesh, Indonesia and Vietnam, three of the countries most vulnerable to climate change.

According to a statement by Akhter Khan Musroor, member secretary of the Bangladeshi NBCD UK:

HSBC’s new investment in coal business in the Delta region is a threat to livelihoods in Bangladesh, Indonesia and Vietnam. Bangladesh is the most vulnerable country to climate change. As HSBC’s coal financing policy for Bangladesh will push it into more danger, we demand they do not invest in coal in Bangladesh and in the delta region. We do not need dirty coal energy.

Anti-militarism and climate justice are inseparable

The protest was an opportunity to show the unity between those struggling against climate crisis and those involved in anti-war and anti-colonial struggles. The event’s Facebook page reads:

The violence enacted on behalf of these governments and companies has displaced communities and destroyed families across the planet, a situation that will only worsen as the extraction and burning of fossil fuels exacerbates the impacts of the climate crisis.

The struggles of anti-militarism groups and climate justice groups are inseparable.

The Canary contacted HSBC for a comment about whether they plan to divest, but received no reply.

The fact that HSBC pulled out of Israeli arms company Elbit Systems last year, and has begun to revise its policy on funding new coal projects, shows that divestment campaigns are working. Indeed, we will all stand a much greater chance of success if we continue to see the way our struggles intersect and work together towards common goals.

The author is part of the Shoal Collective, a cooperative producing writing for social justice and a world beyond capitalism. Twitter: @ShoalCollective