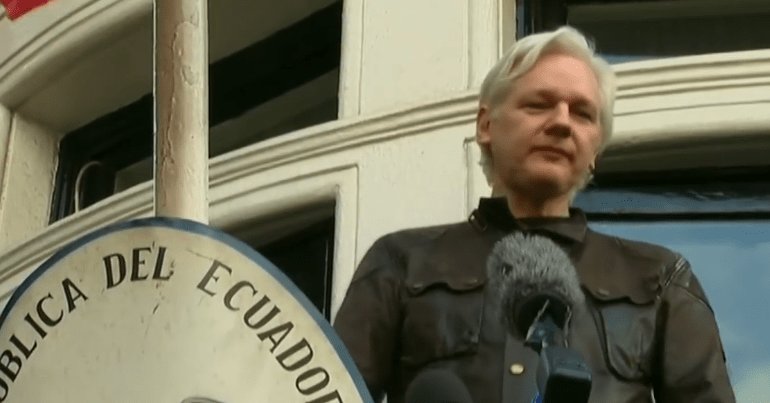 On 11 April, the Ecuadorian government withdrew WikiLeaks founder Julian Assange‘s political asylum. According to WikiLeaks, the Ecuadorian ambassador then “invited British police into the embassy” where Assange had been living for the past seven years. Assange was subsequently arrested on a warrant issued on 29 June 2012 for skipping bail. The US is now seeking his extradition in a case that “poses grave threats to press freedom”.

As well as prominent journalists and politicians, Ecuador’s former president Rafael Correa and many Ecuadorians have strongly denounced their government’s highly controversial decision.

Rafael Correa was elected as Ecuadorian president in 2007, and soon came “under concerted attack from the upper classes and business groups” following wealth redistribution policies. His successor, former ally Lenín Moreno, was elected in 2017 and has since been engulfed in a corruption scandal.

After Assange’s arrest, Correa unleashed an online blitz on Moreno, accusing him of ceding to US imperialist pressure while domestic accusations of corruption grow stronger.

I do not know what to tell you. I only ask forgiveness from me and my people. A traitor and corrupt like Moreno does not represent us. I promise not to rest until I see him in jail, where he deserves to be.

And Correa claimed that Moreno had allowed Assange’s arrest in retaliation “for exposing… Moreno’s corruption”:

On 12 April, moreover, Correa confirmed that Facebook had blocked his “facebook page [understood to be a fan page], with 1.5 million followers”. The move stokes fears of dark links between the US state department and social media platforms.

We absolutely reject the cancellation of the naturalization letter of #JulianAssange and [his] illegal handover to the government of Great Britain.

Press TV reported that enraged Ecuadorians had “taken to the streets in the capital of Quito… against the arrest of… Assange”. More protests are expected over the weekend:

Ecuadorean citizens are gathering outside the Ecuador’s Foreign Ministry in rejection of Moreno’s desition to expel Julian Assange’s from the Ecuadorean embassy in London @telesurenglish pic.twitter.com/mtPVVJ507C

Unlike many ‘liberals‘ in the US, Assange’s arrest has shocked and disgusted wide swaths of the Latin American left. Indeed, WikiLeaks has revealed vital documents detailing Washington’s collusion with right-wing Latin American dictatorships. For left-wingers across the continent, the silencing of Assange will resemble Washington’s attempts to whitewash its dirty history across the continent.