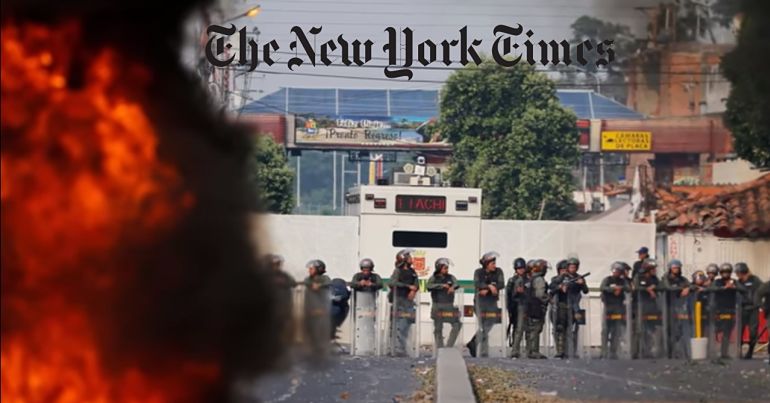 On 10 March, the New York Times published a story disputing the US government’s claims that Venezuelan officials had burned US ‘aid’ trucks. The report showed that it was Venezuelan opposition protesters – and not pro-government forces – that had set the trucks alight.

We might be tempted to heap praise on the Times‘ investigation had this information not already been publicly available for over two weeks. The paper also managed to challenge one false story while spreading more in the act.

On 23 February, the US attempted to force trucks filled with ‘humanitarian aid’ onto Venezuelan territory. The scene was messy, chaotic, and violent: the type of setting the US might use to justify intervention and piece the evidence together later.

In fact, that’s exactly what Washington tried to do. After three trucks were set ablaze, key US officials claimed Venezuelan president Nicolás Maduro was responsible. It was a powerful visual metaphor to support the US narrative: Maduro, an evil dictator, was not only rejecting US ‘aid’ – he was burning it. As US secretary of state Mike Pompeo wrote shortly afterwards:

What kind of a sick tyrant stops food from getting to hungry people? The images of burning trucks filled with aid are sickening.

It was a textbook piece of propaganda, in which the emotional power of the narrative was inversely proportional to the amount of evidence to support it. As the Grayzone reported on 24 February, all available evidence pointed “in the opposite direction”.

Since the ‘burning aid’ story formed an important part of Washington’s narrative for regime change, it’s significant that the NY Times didn’t correct the record until over two weeks later – at which point the coup had already lost considerable steam. Criticism of US imperialism is much less impressive when it’s reserved until it becomes essentially benign (the NY Times famously apologised for supporting the Iraq war after it had begun).

Indeed, it would be hard to argue that the NY Times is anything but a mouthpiece for US empire. Its editorial board has supported 10 of the last 12 US-backed coups in Latin America. After a CIA-backed coup temporarily toppled former Venezuelan president Hugo Chávez in 2002, for instance, it reported:

With yesterday’s resignation of President Hugo Chávez, Venezuelan democracy is no longer threatened by a would-be dictator. Mr. Chávez, a ruinous demagogue, stepped down after the military intervened and handed power to a respected business leader

If the US had managed to topple Maduro this time, we can easily imagine his name replacing that of Chávez.

Propaganda dressed up as critical journalism

While tackling one bogus story designed to display Maduro as an evil dictator denying his population basic necessities, the NY Times continued to play into the same narrative. The report:

In other words, this was yet more propaganda dressed up as critical journalism.

Of course, the NY Times is not the worst of its kind. CNN outright lied in saying that one of its teams “saw incendiary devices from police on the Venezuelan side of the border ignite the trucks”. Nonetheless, it’s vital to question the integrity of ‘adversarial’ corporate reporting given ‘liberal’ papers like the NY Times set the limits of acceptable mainstream debate.

Time and again these outlets prove themselves wholly unreliable on foreign policy. The ‘burning aid’ episode is another reminder of the vital importance of independent media.