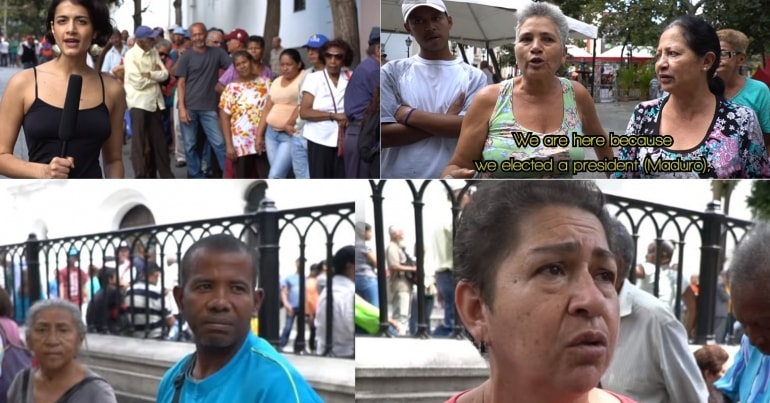 This year’s so-called popular uprising is, at its heart, a furious backlash of the whiter (and wealthier) Venezuelans against their replacement by the larger Mestizo… poor.

The US and British political and media elites, meanwhile, are seeking to legitimise the coup by making those who oppose it (in Venezuela, Africa, Asia, and Latin America) invisible.

The election of Hugo Chávez in 1998 ended centuries of white rule in Venezuela. His government made remarkable achievements in improving the lives of the country’s poor population by reducing poverty from nearly 50% in 1999 to 27% in 2011.

But despite steps towards ending ethnic and economic discrimination, Chavistas and opposition parties remain visibly divided on ethnic lines:

Guys, let’s speak plainly. The picture above is of Venezuela’s Constituent Assembly – dominated by the Chavistas. The picture below are the coup makers of the legislature. Spot the difference? pic.twitter.com/5S8z2Rv1wp

Sectors of the Venezuelan opposition, moreover, have consistently demonstrated a “callous disregard for human life”. In 2017, for instance, over 100 opposition supporters surrounded an Afro-Venezuelan Chavista named Orlando Figuera, beat him up, stabbed him six times, and then burned him alive. Figuera’s mother said afterwards:

Who do I blame? The opposition, because they are the ones who doused my son in gasoline like an animal.

More recently, a racist meme was passed around social media likening Venezuelan vice-president Delcy Rodríguez to a monkey, with the caption “separated at birth”.

Ahmed Kaballo, who’s been covering events on the ground in Venezuela, has also reported on the country’s ethnic tensions:

Kaballo spoke to The Canary about his experience of reporting on racism in Venezuela. He said:

I spoke to an Afro-Venezuelan sister who told me she remembers hiding that day [when Figuera was attacked] because she was scared that because she was Black the same would happen to her and they would say she was a Chavista and thus attack her.

As a Black journalist in Venezuela, Kaballo continued by saying:

My experience as a journalist who opposes Western intervention in Venezuela has been different from other Western journalists I have spoken to who share a similar position such as Max Blumenthal or Ben Norton. In fact, that difference was pointed out to me by Max.

Interestingly, on the border with Colombia the so-called humanitarian aid volunteers were shouting abuse at me from afar, assuming that I was a Chavista.

Global coverage of Venezuela reflects the white supremacy at the heart of the coup attempt.

Like inside Venezuela, the international media consistently represents Chavistas as “violent, unthinking gangs or mobs”, while the largely white opposition supporters are shown as the face of “civil society”. As author Alan MacLeod found:

Across a sample of 501 articles in seven leading Western newspapers, there were 35 references to opposition groups as representing a respectable ‘civil society’, but chavista groups were not once described in the same manner.

The language of the coup attempts to overtly and implicitly indicate to those white European elites that it will be a return to the good old times, and that language has been picked up on by both the European elite and the Brown and Black poor of Venezuela.

Roughly three quarters of the world’s governments, meanwhile, don’t recognise Guaidó as Venezuelan president. But the Western media consistently elevates the quarter of largely white, Western nations that do. Here, both US secretary of state Mike Pompeo and US news outlet MSNBC show maps suggesting support for Guaidó is far greater than it actually is:

How the establishment lies thru maps. @SecPompeo and @MSNBC present maps that look like theres a big surge of support for Guaido. What they dont say is the countries not colored all endorse Maduro! Pompeo even cuts the world in half so it wont look as bad! #manufacturingconsent pic.twitter.com/wNn5eYc9Bs

The BBC similarly misrepresents global opinion on Venezuela. In one article, the BBC wrote that Guaidó “has been recognised by more than 50 countries” while elected president Nicolás Maduro is “backed by key economic allies including Russia, Cuba and China”. The BBC thus ignored the majority of African, Asian, and Middle-Eastern countries that continue to recognise Maduro. It also subtly suggested that Maduro’s international support base is exclusively the West’s ‘official enemies’. And the article suggests that recognising Maduro naturally stems from economic interest, rather than respecting democracy.

In short, Venezuela’s population is battling deep structures of local and global racism. Once we recognise this, we can see that this coup is centuries in the making.

Featured images via the Grayzone/YouTube