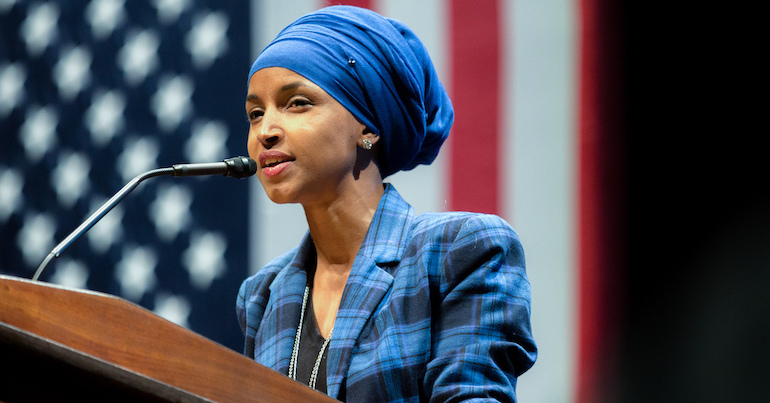 Progressive congresswoman Ilhan Omar is currently under attack from all sides of the US establishment. By refusing to pledge allegiance to Israel, she has been charged with antisemitism. But despite attacks from establishment Democrats, Republicans and the corporate media, Omar has stood firm to challenge the ongoing human-rights abuses in occupied Palestine.

And as the war of words rages, the voice that shines strongest and clearest above the noise is Omar’s own.

Democrats Omar and Rashida Tlaib are the first Muslim ever women elected to congress. Both support the Boycott, Divestment and Sanctions (BDS) movement. Omar has also openly criticised Israel’s actions in Palestine. As The Canary reported in February, Omar challenged the influence of Israeli lobby group the American Israel Public Affairs Committee (AIPAC) on US politics.

On 1 March, the New York Times reported that Omar said:

I want to talk about the political influence in this country that says it is O.K. for people to push for allegiance to a foreign country.

This prompted Eliot Engel, chair of the House Foreign Affairs Committee, to demand an apology.

Meanwhile, as the debate intensified, Omar clearly stated her position with absolute clarity and eloquence in a Twitter thread:

I have not mischaracterized our relationship with Israel, I have questioned it and that has been clear from my end.

She was clear that she can, and will, continue to challenge the ongoing violence against Palestine, even if others remain silent. And she stressed:

My Americanness is questioned by the President and the @GOP on a daily basis, yet my colleagues remain silent. I know what it means to be American and no one will ever tell me otherwise.

She also made it very clear that criticising Israeli prime minister Benjamin Netanyahu and the occupation of Palestine is not the same as antisemitism:

Being opposed to Netanyahu and the occupation is not the same as being anti-Semitic. I am grateful to the many Jewish allies who have spoken out and said the same.

And ultimately, she made a powerful call for peace and solidarity, saying:

We must be willing to combat hate of all kinds while also calling out oppression of all kinds. I will do my best to live up to that. I hope my colleagues will join me in doing the same.

Donald Trump has now joined the establishment attack too.

As the debate intensifies, though, a global movement of solidarity is rising to support Omar.

I don’t want you guys to worry about me, truly… I am fine. I know what my mission is, I know what my purpose is. I know that, as long as I breathe, that I will continue to make people uncomfortable in the best way possible

“I don’t ever want you to worry about me. I am fine. I know what my mission is. I know what my purpose is. I know that as long as I breathe that I will continue to make people uncomfortable in the best way possible” @IlhanMN is strong but we will NOT be silent #StandWithIlhan pic.twitter.com/x2oXdN4w5N

These words show Omar’s incredible strength in the face of dangerous and personal racist attacks alongside establishment wrath. As Vice reported:

Last Friday [1 March], an anti-Muslim poster that likened Omar to a 9/11 terrorist triggered mayhem in the West Virginia Capitol building. Omar was also allegedly on a now-arrested self-avowed white nationalist’s hit list, and the FBI is investigating graffiti found in February in Minnesota that called for her assassination.

As well as her position as an incredible politician, Omar speaks truth to power from experience. She was born in Somalia and lived in a Kenyan refugee camp for four years after her family fled from a brutal civil war. But after 23 years in the US, she’s now one of the most powerful voices to speak out against injustice.

Ilhan, we truly do stand with you.