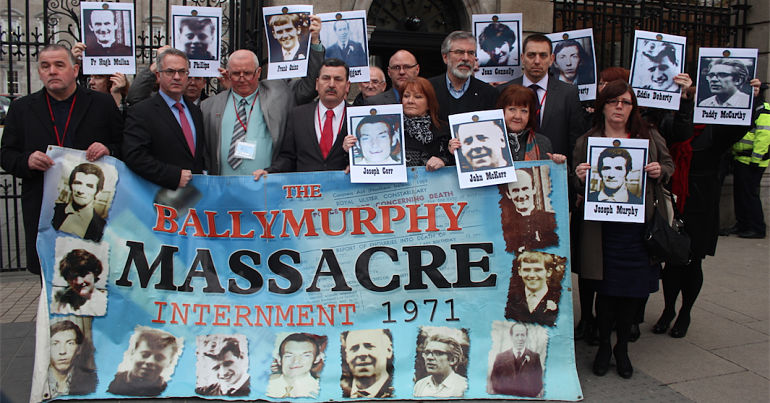 On 11 March, former British army general Sir Geoffrey Howlett admitted internment without trial created a “full-blown battle”. He was giving evidence at the inquest into the killing of 10 civilians in Ballymurphy in Belfast. The killings happened between 9 and 11 August 1971.

On 9 August 1971, Operation Demetrius marked the beginning of internment in the north of Ireland. Brian Faulkner, an Ulster Unionist and prime minister for the north, introduced it.

As The Canary reported, internment meant arresting and detaining people without a court hearing. This was similar to what happened in Guantanamo Bay. Police and security services intelligence predominantly led to the internment of Irish republicans.

The Canary also reported the DUP’s and Karen Bradley’s claims about killings during the conflict in Ireland. They claimed “well over 90%” of all killings were “caused by acts of terrorism”. But figures vary. And comprehensive lists can vary also.

But 1972 accounted for the largest number of casualties. And the period from 1971 to 1976 accounts for the highest number of deaths. Internment ended on 5 December 1975.

The retired general also said “most if not all” of the civilians shot in Ballymurphy “were not IRA”. The victims’ families welcomed this news but hoped for an apology. It hasn’t yet arrived.

An eleventh person who died some days later is not included in this inquest. His name was Paddy McCarthy. And he died of a heart attack after the army allegedly subjected him to a mock execution. The inquest continues in Belfast this week from 12 to 14 March.