Corbyn is right. May's Brexit 'win' is just smoke and mirrors. - The Canary 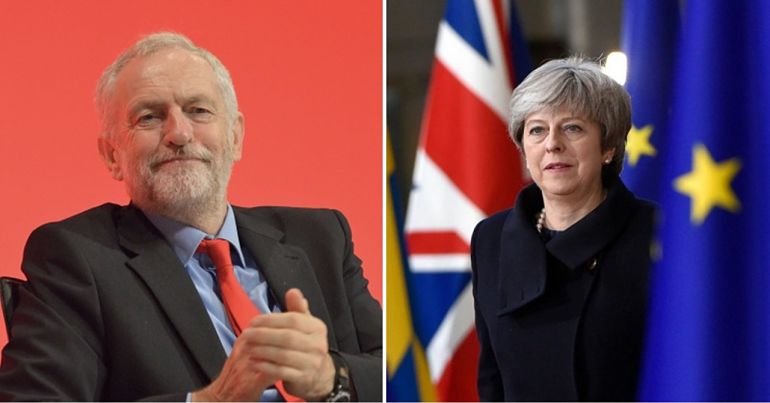 On 11 March, Theresa May took a last minute flight to Strasbourg to negotiate Brexit details. Although she claims to have secured “legally binding changes”, and newspaper headlines are screaming triumph, this is far from the truth. Jeremy Corbyn, shadow Brexit secretary Keir Starmer, and even European commission president Jean-Claude Juncker present a very different opinion. May’s Brexit ‘win’ is just smoke and mirrors.

MPs are due to vote on May’s deal on 12 March. With just 18 days until we’re due to leave the EU, the clock is ticking fast. Corbyn was very clear. May’s “negotiations have failed”:

The Prime Minister's negotiations have failed. Last night's agreement with the European Commission does not contain anything approaching the changes Theresa May promised Parliament, and whipped her MPs to vote for.

And he also called for MPs to reject her deal.

Corbyn wasn’t saying anything extreme. As the Guardian reported, in a late night press conference Junker also “conceded the EU had not agreed to the prime minister’s central demand”.

May’s negotiations hinge on changes to the backstop in Ireland. But as Junker and the Irish taoiseach Leo Varadkar both pointed out, May’s eleventh-hour negotiations left the withdrawal agreement intact. This is the same agreement that MPs voted out in the biggest ever governmental commons defeat in January.

Starmer issued the same warning. As he told Sky News, not only did the EU agree with Labour’s suggestions following the last commons defeat, but May:

has refused to change her red lines at all. So whatever she’s putting before parliament today, she has not taken… into consideration anything the opposition have said in the eight weeks since the last vote… now to be re-presented with basically the same deal, and to say ‘well you’ve got to suck it up now’ because we’ve wasted eight more weeks…

"The prime minister has refused to change her red lines at all."

Labour's @Keir_Starmer says the PM's failed to consider "anything the opposition has said" and they've been given "basically the same" #WithdrawalAgreement.

My statement in full 7/ pic.twitter.com/yhxWQPHDmy

Even the BBC‘s Laura Kuenssberg showed some respect for Starmer’s legal knowledge:

Handy at this moment for Labour to have a renowned lawyer as shadow Brexit sec 👇🏼 https://t.co/dVQa6ihOcu

And time really is running out, because if this deal doesn’t pass in parliament, Junker is clear that there’s “no third chance”:

There will be “no third chance” says @JunckerEU. MPs must back reworked deal tomorrow or “there may be no Brexit”

If I didn’t live here, I’d be fascinated as to how this experiment in manufacturing consent is works out. pic.twitter.com/jw7J60LakX

Many headlines claimed that May secured a victory. The Telegraph declared: “May keeps deal afloat after last-minute Strasbourg dash”. The Mail, meanwhile, asked if the deal was: “Sealed with a kiss?”, and the Sun shouted: “Brexit Breakthrough. Backstop from the dead”. And the Times stated: “May claims victory in Brexit backstop talks”.

These headlines are a perfect example of the issues with mainstream and corporate media that Noam Chomsky identified in his 1988 book Manufacturing Consent. As Chomsky said:

As it stands, it seems May’s ‘win’ is nothing but hot air. Some commentators on Twitter pointed this out visually:

And others used words:

@Keir_Starmer says what we already know,

With only hours to go until the vote, it looks like even smoke and mirrors may not be enough to get May’s deal through.