Fearless: the Venezuelans that went toe-to-toe with the US empire at their border - Canary Workers’ Co-op 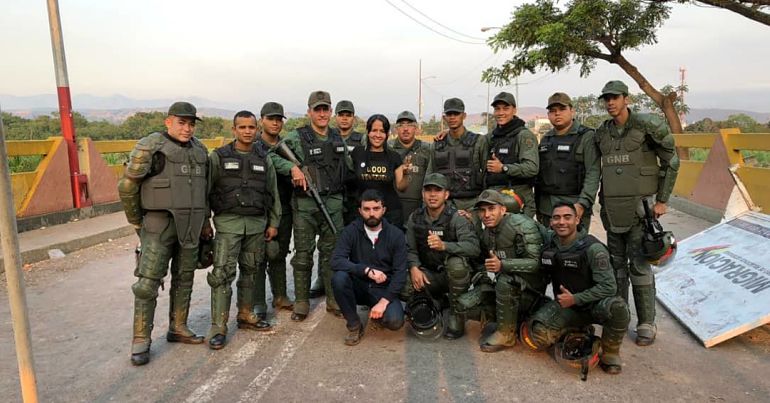 On 23 February, the US attempted to force ‘humanitarian aid’ trucks into Táchira, Venezuela’s border state with Colombia. As the situation devolved into chaos, senior US officials tweeted excitedly about possible military defections and a violent border confrontation.

But by 25 February, it was clear that Washington’s objectives had failed. The Venezuelan military remained loyal, and Nicolás Maduro was still president. Two weeks later, the US suffered another critical propaganda blow when the New York Times reported that Colombians – and not Venezuelan officials – were likely responsible for burning the ‘aid’ trucks.

The Canary spoke with experts on Táchira and first-hand witnesses of events at the border between 23 and 25 February. They provided key context and testimonies about Washington’s humanitarian warmongering.

The Colombian-Venezuelan border stretches some 2,000km – part of which lies between Táchira and the Colombian city of Cúcuta.

Cúcuta is known as “Colombia’s contraband city”; smugglers regularly bring beef, gasoline, and various other products across the border. The city also has a high presence of paramilitaries, which have longstanding links with the Colombian armed forces and are responsible for extreme political repression in Colombia.

The Canary spoke with Ricardo Pérez and Marco Teruggi about the strategic importance of Táchira. Pérez formerly worked in Táchira’s mayoral office, and Teruggi is a sociologist and journalist with wide experience covering the Colombian-Venezuelan border.

It’s likely that Táchira was a strategic location for trying to enter with the ‘humanitarian aid’ trucks. There’s a lot of organised crime and Colombian paramilitary presence in this area. There are all sorts of criminal elements there because so much money and goods are always crossing the border; there are various high-rise blocks in Táchira that are paid for with laundered money.

The Colombian paramilitary forces have infiltrated Venezuela on numerous occasions; and this is the area with the strongest paramilitary presence in Colombia. There are also Mexican drug cartels there, close to Cúcuta.

But the question is: what was the objective? If we can determine Washington’s objective, we can better understand their strategy.

Ultimately, I think, there were numerous plans; and they didn’t work out. That day showed the US the real balance of power between the Guaidó block and the pro-government block.

Jaskeherry Rivas, leader of the ‘Guardians of the Liberator’ social organisation (colectivo)

Our colectivo went to Táchira on the 22 February. We went to confront paid, violent opposition groups – ‘guarimberos’ – who were assisting an incursion onto our territory without authorisation, with a false narrative of ‘humanitarian aid’. We, as a country, prepared the conditions to defend our country; to defend our territory above all.

Unlike the guarimberos, we weren’t paid. We went out of conscientiousness to defend our territory – come what may.

We went to contain an attempt to create a false-positive attack on our country. We were on the bridge, but we let our military authorities do their job.

Rivas continued by speaking about what he saw:

The first thing we became aware of was the ‘aid’ concert going on across the border. They were raising funds for the supposed aid. Where did the funds go? We don’t know; they certainly haven’t been used for aid, anyway.

The Canary asked Rivas if he was worried war might break out:

No. We’ve been at war for 20 years – since Hugo Chávez was elected. We’re not afraid of the US empire; we’re not scared of guarimberos. We were happy to defend our territory.

Anael Ruiz also spoke about fears that war might break out, saying:

They were scared because we weren’t scared! In fact, my mom was scared. She rang me from home to tell me: ‘Something’s going on at the border’. I had to tell her slowly: ‘Mom, I’m at the border’.

At one point, we heard gunshots – and the main concern was that paramilitaries might be attacking our armed forces. Any kind of provocation, we knew, might lead to a real conflict.

But later, we saw our Venezuelan general speaking to the Colombian officers. We couldn’t hear what they were saying, but it was pretty clear from the context that they were telling them that diplomatic ties were broken; that Venezuela wouldn’t allow an incursion onto our territory. The conversation was calm; our general seemed composed. So we weren’t worried.

After, when the Venezuelan guard were walking home, people were supporting them – clapping them on the street. Someone was shouting what Chávez once said: ‘Bastantes cojones hay aquí!’ (Here, we have lots of courage!).

Both Washington’s Plan A (recognising Guaidó as Venezuela’s ‘leader’) and Plan B (trying to force ‘humanitarian aid’ onto Venezuelan territory) have failed to topple the Venezuelan government. Plan C, it seems, will be slow, punishing economic warfare. But many Venezuelans are resisting Washington’s boot on that front too.