It’s time for a basic, guaranteed income for all - Canary 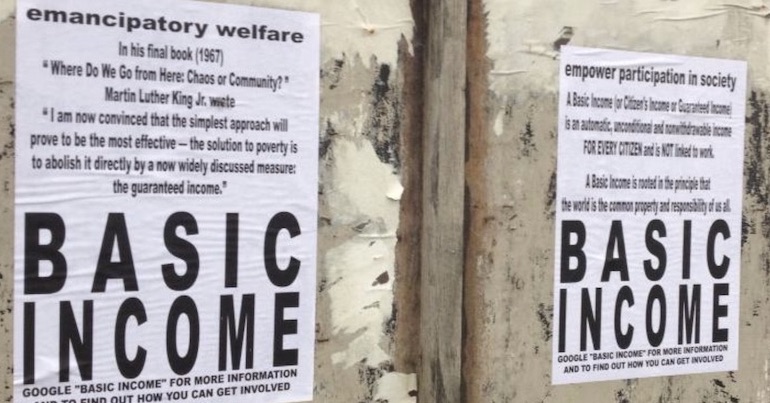 The pandemic crisis has laid bare the multiple flaws in the British system of social support. With the economy shrinking and unemployment soaring, the government has been forced to support falling incomes through wage subsidies and the easing of Universal Credit rules. While these are welcome, millions are missing out, opening up a new divide between those protected by government measures and those who are not. But there is another way to support everyone.

One way of helping to fill these gaps would be by the introduction of a robust, guaranteed income floor for all, sometimes called a Universal Basic Income (UBI). For centuries, progressive thinkers have been calling for such a floor. The post-war social security system constructed by William Beveridge and Clement Attlee set out to build one. This was actually an indirect model of an income floor. It was to be delivered by a more comprehensive system of collective national insurance, family allowances, the safety net of means-tested national assistance, and full employment (for men).

These reforms were light years ahead of the patchy and widely hated pre-war system. But they were also full of holes and Britain has never come close to creating a robust income floor. Today, millions fall through what is an imperfect, mean, and punitive system. Most benefit levels are, as a ratio of typical earnings, below those in other comparable rich nations.

The coronavirus (Covid-19) crisis has already changed the terms of the debate about public policy and the way society should function. With attention turning to post-crisis reconstruction, there is unlikely to be a better time to tackle head on the largely ignored insecurities and divisions that have long disfigured society.

A basic income floor is not a silver bullet, but as part of a reconstructed system of social support, it has real transformative potential. While parliament has largely ignored the idea before, 110 cross-party MPs and peers have called for a recovery basic income. If a BI had been in place at the start of the epidemic, it would have provided an automatic mechanism for supporting incomes and for injecting cash payments on a temporary basis to support recovery.

Meanwhile, there is another immediate step the government could, and should, take. As called for by social scientists, it should raise the level of child benefit – essentially a basic income for children – for a limited period. Paid to 12.7 million children, this would be a cost-effective and fast way of getting cash to families.

When a more comprehensive list has been compiled, this emergency measure could be extended to adults. By way of illustration, giving adults say £500 a month and children £200 a month (through child benefit) would provide a family of four with £1,400 a month. The benefit to higher-income groups could be clawed back through tax adjustments. The upfront cost of such a scheme would be in the order of £15 billion a month (financed by conventional borrowing or some kind of ‘helicopter money‘ that delivered cash directly to individuals), but much or all of this cost would be recovered by faster recovery. This commitment compares with an estimated £10bn a month for the treasury’s ‘job retention scheme’. Meanwhile, cuts to benefits budget since 2010, have totalled nearly £40bn.

A bridge to a permanent scheme

But a recovery measure should also be used as a bridge towards a more permanent basic income, one with lower rates of payment, that would sit below the existing benefit system. A study by the progressive think-tank Compass has shown that a ‘modest permanent scheme’ – placing a new holes-free net under the existing benefits system – would be feasible, affordable, and highly progressive. It would cut poverty and inequality, strengthen universalism, and cut means-testing.

A solid income floor would build an automatic anti-poverty and pro-security force into the existing system of social protection. It would bring a modest income for the small army of carers and volunteers, who are mostly women. As the epidemic has revealed, their contribution is crucial to the functioning of society. By providing all citizens with much more choice over work, education, training, leisure, and caring, it would also lay the foundation for greater personal empowerment and freedom. It is perfectly possible to devise a permanent scheme that is broadly revenue neutral.

The crisis has sparked new life into an ancient idea. A basic income floor would provide an answer to a decades-long debate about how to update Beveridge for a turbulent era, strengthen social resilience, and put down a marker for the kind of society that should emerge when the crisis eases.