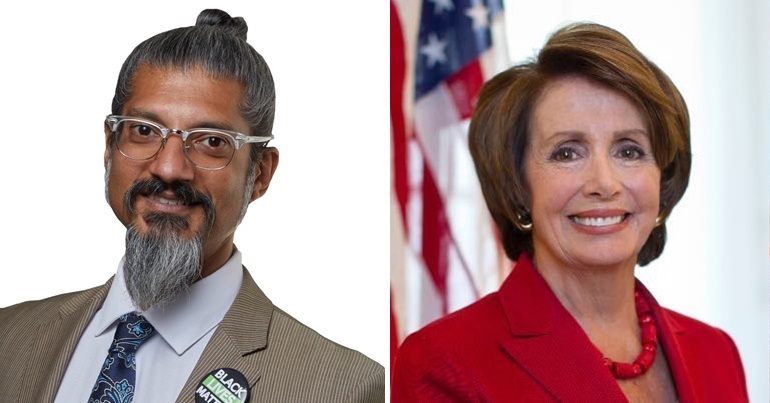 “More of the same” is not a reasonable option

Sometimes, what we perceive as safe choices are, unfortunately, simply choices for more of the same. And I think if there’s anything that the pandemic, and climate crisis, and this criminal president [Donald Trump], and the crisis in human rights illustrate, it’s that we can’t tolerate or endure ‘more of the same’. And if we elect the very same voices that have dragged our civilization to this crisis – including supposed opposition figures who unfortunately do so much to pave this president’s road even while claiming a so-called ‘resistance’ that they use for fundraising purposes but that does not so much appear in their governance – we certainly have our work cut out for us.

to people who think that, for instance, Joe Biden – or perhaps Nancy Pelosi – is a safe choice, I would just ask: well how well has their tenure worked out for the interest that you care about?

And he pointed to how these establishment politicians haven’t even served centrists (i.e. the people they call ‘moderates’), let alone voters on the left:

… most ‘moderates’ care about the opportunity for working people to see a doctor without any obstacles. I think most moderates care about peace and security. They care about civil rights. They care about voting rights. Many moderates care about many of the same principles that progressives do. The difference is that moderates are willing to tolerate stasis and delay whereas progressives, I think, are… informed and inspired by Dr [Martin Luther] King in recognising that the need to claim and secure justice is always an urgent imperative that, if we defer into the future moral calculuses, we have lost any grounding in the present.

Where ‘delaying justice into the future’ leads

Buttar then highlighted where the ‘toleration of stasis’ has left us:

Dr King said in no uncertain terms that the intersection of racism, and militarism, and capitalism would threaten justice everywhere. And in the years since then, because so many people were willing to delay justice into the future, what has come to pass is a climate catastrophe driven particularly by the specific intersection of capitalism, racism, and militarism. International resource wars advanced to serve the interests of fossil-fuel extraction and weapons-manufacturing companies, often running roughshod over Indigenous communities. That’s the entire noxious soup in one place…

And what do those resource wars beget? Consumption, and extraction, and climate chaos: carbonization of the atmosphere. Or, alternatively, habitat encroachment which has been linked to the coronavirus pandemic. So whether it’s climate crisis, or whether it’s a pandemic, you can draw a connection to corporate resource extraction. The commitment to corporate resource extraction is killing life on earth. And this isn’t something that should surprise us in so far as the science has been there for the better part of a generation.

We were warned sociopolitically by our nation’s greatest political philospher and civic leader Dr Martin Luther King two generations ago.

“Learn from our history”

Buttar also directed himself to “people who are supporting what they think are safe choices”, asking them to:

learn from our history, and please stop forcing us all to repeat it. Because it is the particular unwillingness of moderates to embrace justice and heed the calls of communities that are enduring the preventable calamities engineered by our public policies that is what delivers us to these crises. And I would invite them to read a particular text written by Dr King himself. His Letter from a Birmingham Jail is an iconic text. A canonical text in political science, and in moral philosophy, and it explains the bankruptcy of deferring justice for the sake of perceived political expediency, and the multiple failures in the moderate view here.

…what they think are safe choices not only are choices for the same inertia that has delivered us to these crises, but they also aren’t safe even in the narrow electoral sense. And I don’t have to look very hard to find the evidence for that. The 2016 election proves the case all too starkly. Moderation does not win elections. Passion wins elections. And you don’t get passion from corporate candidates [emphasis added]. You get passion when you embrace candidates who meet the needs of legions of people, of an entire generation that will flood stadiums, and pound pavement, and transform an entire political discourse. …

That’s what Bernie Sanders offered. … and I don’t have the fifty-year experience that Senator Sanders has, but I have twenty years of that experience, and I’m looking forward to building the fifty years of experience, and doing everything I can with the remainder of my time on this earth fighting for the rights and the needs of people. … And that’s exactly what the centrists, the supposedly ‘safe choices’, have not been willing to do.

Featured image via Shahid Buttar (with permission) and US Congress