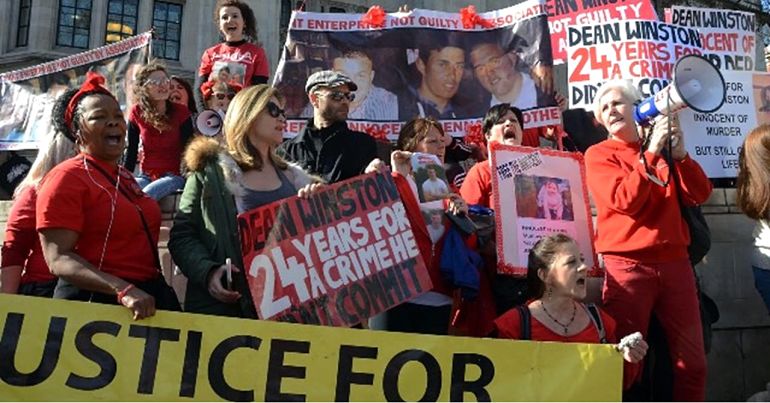 Protests continue around the world to challenge the abhorrent extent of systemic and institutional racism. Now, conscious rapper and poet Potent Whisper has released a new video. This exposes a further layer of racism within our legal system. Campaigners have called ‘joint enterprise’ “racist” and the UK’s “most brutal law”. It disproportionately affects too many young Black, Asian and Minority Ethnic (BAME) people.

We say you judge a man by the things he does.
We judge him by his actions and so should every judge.
Imagine if I judged you now, based on what your friend did.
Imagine he stabbed a man to death but you get arrested,
imagine if you weren’t even there at the time,
but suddenly it’s you getting sent down.

Under joint enterprise, one or more people can be found guilty of a crime committed by another person. So, for example, the driver of a getaway car could be found guilty in a burglary case. However, it’s highly controversial.
Joint Enterprise Not Guilty by Association (JENGbA) is a group that works with families of young people who’ve been falsely imprisoned via the application of joint enterprise law. The group notes it’s been used to issue “mandatory life sentences” for crimes committed by other people. Significantly, the media also fuels a:

shared incorrect narrative that the Joint Enterprise doctrine is about gangs, broken Britain and the ‘alleged’ feral youth that needs to be served justice.

People can be wrongly charged and convicted when they have been within close proximity of a crime, have a random connection with the actual perpetrator or via text or mistaken phone call or they might not even have been at the scene of the crime.

Campaigners against joint enterprise believe this happens too often. In the words of Potent Whisper, people “go to prison” for something they “didn’t do”. JENGbA co-founder Jan Cunliffe told The Canary:

We’ve been working to prove that the joint enterprise law is wrong and that it’s racist. We have the evidence. But we’ve been ignored by the government for the last ten years.

This is the most brutal law we’ve got. We’ve got children as young as 12 who’ve been given life sentences for a murder that they didn’t commit. The sentences are huge too. We’re not talking three or four years, we’re talking as big as 35 years.

But, most worryingly, studies show that the doctrine is disproportionately used to criminalise young BAME people – young Black men in particular.

Systematic racism is found in all areas of UK society, not least the [criminal] justice system. The application of laws like ‘joint enterprise’ is discriminatory towards working-class and BAME communities, often finding people guilty simply because of their personal circumstances or the colour of their skin.

In 2016, a study commissioned by the Centre for Crime and Justice Studies examined the disproportionate criminalisation of BAME people in the UK legal system. The findings revealed that “prosecutors regularly rely on racial stereotypes” in cases with Black defendants. This was used to influence juries, especially in building joint enterprise cases. For example:

prosecution teams were reported as being more likely to appropriate discourses of ‘gang insignia’ and music videos or lyrics, particularly ‘hip hop’ and ‘rap’ genres, as a way of building a JE [joint enterprise] case against BAME prisoners.

Gangs ‘that don’t even exist’

The report also examines the ways that targeting young BAME people as gang members is “a result of racialised policing practices, not because of the objective risk they pose”.

When there’s an incident, rather than going after the person who committed the crime, they round up a whole group of people. If these young people are Black, the gang narrative is used. This isn’t a friendship narrative: they’re a gang. And because they use the gang narrative, they’re all ‘bad’ people and they all knew someone was going to get murdered.

That’s the kind of evidence they use – not fingerprints, DNA or blood splatter evidence. That evidence just isn’t enough, especially to accuse someone of such a serious crime. So young people – who haven’t murdered anyone – are going to prison for very long sentences, even though the court proves that they didn’t actually murder anyone.

Very often police accuse people of gang membership on the basis of their skin colour or their postcode. They’ve used YouTube videos, said that watching a certain rap song means they must be in a gang. Sometimes the clothes they wear are enough. And sometimes we’ve had cases where the name of the gang has been made up. Young people who’ve been convicted said ‘this gang name that we’ve been given doesn’t even exist’.

Half of those questioned in this study were not present “at the scene of the offence”. It found that “the ‘gangs’ discourse” was frequently used against BAME defendants, but rarely against white people. Yet:

Despite featuring heavily in gang databases, young black and minority ethnic people do not appear to be responsible for most serious violence in their areas. Indeed, official data illustrates that the majority of successful prosecutions for serious violence are of white people.

“What kind of justice puts the innocent in prison?”

A 2016 Supreme Court ruling found that joint enterprise resulted in wrongful convictions. But this hasn’t ended the practice or dealt with the systemic racism in policing and UK criminal law. Cunliffe explained:

But she also stressed:

This government’s actually proved in the last six months that they can change laws and can change sentences. They’re doing that now… But they won’t look at joint enterprise convictions. It’s a racist law.

How can the law like this exist right here in Britain?
What type of justice puts the innocent in prison?
I thought a person can’t be guilty till it’s proved they did it.
And I’m not the only one with that exact view,
even a Supreme Court is saying that too.
In 2016, they ruled the law had been abused
and that it’s being misapplied – which of course we know is true.
Now you might think that this ruling was amazing news,
now we can free the people serving time
for crimes they didn’t do.
No, it turns out their appeals have been refused.
And there’s proof that the same law is still being abused.

Cunliffe also said that joint enterprise creates “a life sentence for the families as well”. Family members of those jailed “spend the rest of their lives trying to fight these convictions”. But it has far deeper implications for the wider community and other young people. Cunliffe told The Canary:

If a large group of people from the same community get convicted at the same time then all the other young people get incredibly fearful that the same thing might happen to them. They lose complete trust in the justice system. They lose trust in the police and they lose trust in everything. Because they’re left thinking ‘even if I do nothing, I could spend 25 years in prison for a crime I didn’t commit, because nobody cares that I didn’t do it’. That’s a terrible way to grow up.

Very often, once one family member has been convicted, the rest of the family become a target for the police. I’ve seen family members with a younger sibling who gets stopped and searched permanently. It borders on harassment. The police watch, follow and search people simply because they might be ‘the same kind of person’. 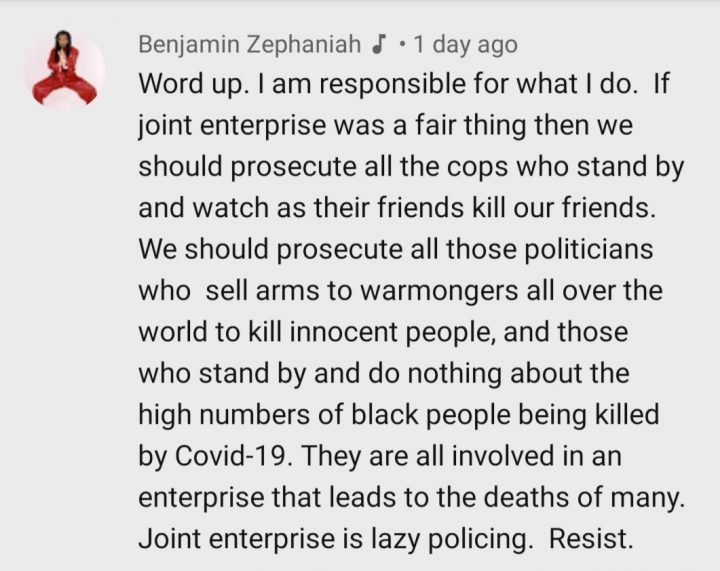 “We must topple racist statues and statutes alike.”

Drawing attention to the unjust and racist aspects of joint enterprise is vital. As Black Lives Matter protests continue, it’s now more important than ever. Cunliffe told The Canary that this law underpins a significant amount of anger in the UK and is “very important as part of these protests”. She continued:

This is the worst bit of law that this country has right now. And it’s coming from the top. Every agency in this country that is supposed to protect us is involved. It’s good to fight racism at ground level, but this is racism right at the top. We need to get the public to realise that this is where it’s coming from and this is what Black Lives Matter is fighting against. It’s the institutional racism, the systematic racism and that’s the thing that most people don’t realise even exists.

She also challenged corporations sharing anti-racist sentiments on social media, yet taking no further action. “If you want to stand up to racism”, she said, “you join forces and you hold the government to account”. She implored companies to support JENGbA and similar groups.

“Racism”, Potent Whisper told The Canary, “is often discussed in terms of individual acts of prejudice”. But, he continued:

the police officer that murdered George Floyd (RIP) is the same employer that gave the job to somebody else because of a surname, is the same newspaper that works to legitimise racism, is the same record label that co-opts black cultures and weaponises them for use against black people.

Systematic racism is found in all areas of UK society, not least the [criminal] justice system. The application of laws like ‘joint enterprise’ is discriminatory towards working-class and BAME communities, often finding people guilty simply because of their personal circumstance or the colour of their skin.

As such we must topple racist statues and statutes alike.

Listen to all of Potent Whisper’s powerful poem in this video, produced by 3ss3nce and Tone-O: