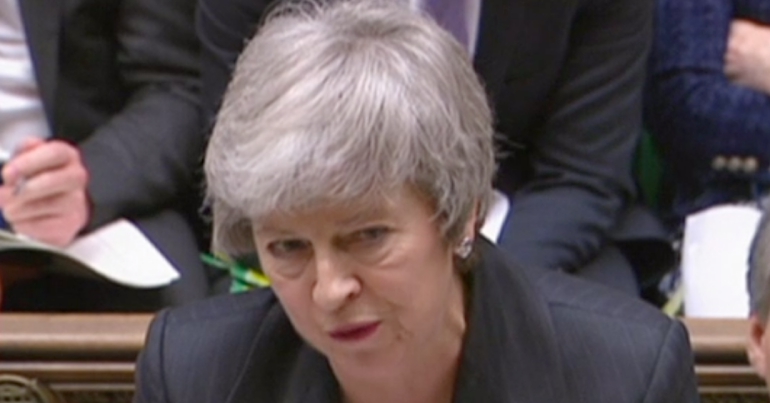 But as The Canary reported, rapper, activist and writer Akala tore down some of the key myths about violence and gang crime. He was absolutely spot on. Because ignoring the underlying issues, alongside continual cuts to services for young people, means more young lives could be tragically lost.

This, however, appears to be a crucial point that May refuses to acknowledge. And in doing so she is showing a dangerous level of ignorance about knife crime.

As the Independent reported, on 5 March, Williamson said that:

The UK armed forces “stand ready” to intervene in the knife crime epidemic…military personnel “would always be ready to respond” to calls for help.

If there are sufficient police numbers, can the prime minister please explain why… [Williamson] was offering to send in the military to assist with knife crime?

The commissioner… has recognised that causes of knife crime are complex. She said, ‘police alone won’t sort this issue out. We can’t arrest our way out of this problem’. And I agree… we need to tackle it across a number of fronts.

But May’s suggestions to tackle this crisis completely missed the point. She stated that she would  “continue to enforce…laws” and “intervene early and stop young people going down into a life of crime”. She also claimed that the Conservatives have invested “£200m into the Youth Endowment Fund and our Early Intervention Youth Fund has already funded 29 projects”.

What she failed to mention is the Conservative-led attack on services for young people since 2010. And she showed no awareness of the research Akala pointed to. He stated that the proven causes of violence among young people are poverty and broken education. As Network for Police Monitoring (Netpol) coordinator Kevin Blowe told The Canary:

Nor will the proposed new punitive knife prevention orders and longer prison sentences address the desperate need for better emotional support for vulnerable children, the alarming number of school exclusions in working-class and racialised communities, the lack of affordable housing and the general lack of hope that leads a minority into youth violence.

This government has targeted young people from the outset. In 2011, Educational Maintenance Allowance (EMA) was abolished. It gave up to £30 a week for 16 to 19-year-olds from the lowest-income families to support them in education. As soon as it came to power the coalition also started to axe funding to the Sure Start programme. This worked “with parents and children under the age of four living in the most disadvantaged areas” and was a lifeline for many. Meanwhile, the introduction of Universal Credit has caused poverty and financial disaster for countless families.

And it doesn’t end there:

And for the poorest young Black people, the impact of these cuts has been devastating. As a report from UNISON stated that EMA cuts “had a particular impact on young Black men”. It also found that by 2012 “more than half” of young Black men” looking for work “were unemployed”. This rose from “a quarter” in 2008.

As a 2018 UN report into extreme poverty in the UK found, austerity has impacted single parents – especially mothers – more than any other section of society. Analysis by the Labour Party in 2018 also revealed that spending on children and young people’s services has been cut by nearly £1bn in real terms since 2012.

Meanwhile, research for the UK Youth Index found young people’s wellbeing is at its lowest level since the study was commissioned in 2009.

And while the debate about police numbers rages, it’s also vital to remember that even senior police officers believe that “institutional racism still plagues policing”. As Blowe explained, calls “for greater police coercion” fuel the “moral panic” that Akala also identified. Blowe said that the media and politicians continue to make the “usual demands” for “more officers, more draconian police powers and a massive increase in stop and search”.

But Blowe pointed out that this only risks alienating young people further:

These are the loudest angry voices but there is little solid evidence their proposals will work or have ever worked. Criminalising a generation of predominantly young Black men by constantly searching them – when up to 95% of stops lead to no arrest – is unlikely to make teenagers who already see the police as institutionally racist feel any safer.

And in 2018, StopWatch blasted the Met’s gangs database as “draconian”, racist and counterproductive. Chief executive of StopWatch Katrina Ffrench said:

Not only is the Matrix completely ineffective at combating the crime it claims to want to tackle, our research suggests it makes crime more likely.

And yet, as Blowe explained “anyone who disagrees with a “crackdown” is accused of not caring about the deaths of young people”. But this couldn’t be further from the truth. These are, Blowe, continued:

Men like Sami Sidhom, who lived and died up the road from me.

It is in our neighbourhoods, rather than those of reactionary media commentators and police organisations, where these deaths are taking place. We want solutions that genuinely address and try to solve the underlying reasons why knife crime has increased.

May insists that cutting police numbers has no link to rising crime. But the debate over police numbers is a smokescreen which ignores the deeper issues. We can’t overlook the impact of nine years of Conservative-led cuts and the damaging impact of austerity on a whole generation of young people. And nor can we ignore the way police treat too many young people, particularly those from Black, Asian and Ethnic Minority communities. As Blowe said:

All we are seeing is posturing from those who always insist more policing is the first option, rather than the absolute last resort, to every problem in society.

Years of cuts and police abuse has created a perfect storm. Bickering about police numbers threatens lives. It’s time for real solutions that tackle the root causes of the problems. Because young lives are too precious not to.