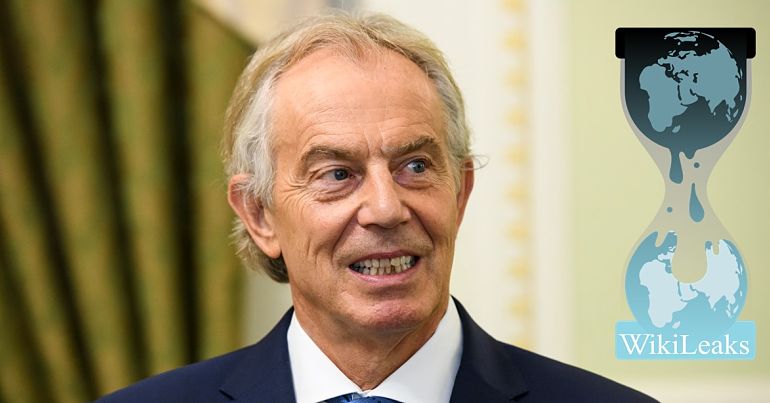 Time and again, WikiLeaks shows us what our elected officials do when they think we’re not watching. From the invasion of Iraq and Trident to Saudi Arabia and the Chagos Islands, WikiLeaks has published documents that should leave British politicians not only red-faced but facing court.

A new dossier by the Defend WikiLeaks campaign now highlights the WikiLeaks cables on the ‘New Labour’ project that should be written on its gravestone.

The poorly planned invasion of Iraq

According to a highly sensitive 2006 UK military report into Iraq, UK and US war planning “ran counter to potential Geneva Convention obligations”. And it suggests that government incompetence and secrecy led directly to Iraq’s post-invasion collapse:

[T]he UK Government, which spent millions of pounds on resourcing the Security Line of Operations, spent virtually none on the Economic one, on which security depended.

Leaders should not start an operation without thinking… it is not enough to identify the desired end-state.

The report also reveals that former PM Tony Blair’s government had little control over events leading up to the invasion:

The UK had to work to a timetable and strong ideological views set in the United States. As one Senior Officer put it: ‘the train was in Grand Central Station, and was leaving at a time which we did not control.’

Many critics have long argued that the invasion was about getting access to Iraqi oil.

A US cable from April 2009 shows UK business secretary Peter Mandelson “pushing British oil and other corporate interests in Iraq”. And a conference attended by UK military officers, Iraqi oil directors, and the likes of Shell, BP, Rolls Royce, and HSBC in the Iraqi city of Basrah:

demonstrated to local players that there are serious and respected UK multinational companies ready to do business in Basrah.

Rigging the law before the law rigs you

A 2009 cable also reveals that the government of former PM Gordon Brown “put measures in place to protect [US] interests” during the Chilcot inquiry into the invasion of Iraq. The full nature of that ‘protection’ remains unknown. But remarkably, no US officials were ever called to give evidence in public for the inquiry.

A separate US cable also shows how the US and UK governments “rigged the International Criminal Court (ICC) to stop it being able to hold [Tony] Blair and [George W.] Bush accountable for the crime of aggression over Iraq”. After 12 years of stalling discussions, the US, UK, France, Russia, and China voted in 2010 to keep “the power to determine aggression within the Security Council where they have veto power”.

In other words, seven years after waging a war of aggression on Iraq, the UK and the US voted to choose when to be exempt from international law concerning wars of aggression.

The ‘compliant’ UK relationship with Washington

Various cables strongly suggest that the UK’s relationship with the US should be described as ‘compliant’ rather than ‘special’:

And as various cables reveal, all of this was happening while the US was spying on UK diplomats.

Though Blair was out of office in 2011, he privately contacted Libyan leader Muammar Gaddafi to warn him to “stand aside and go somewhere safe”.

According to call notes taken on 25 February 2011, Blair told Gaddafi:

The US and the EU are in a tough position right now and I need to take something back to them which ensures this ends peacefully.

After massive diplomatic pressure from the Saudi dictatorship, a corruption investigation into a £43bn arms deal between Saudi Arabia and UK arms manufacturer BAE was dropped in 2006. The UK government’s official justification was ‘national interest’.

A 2006 US cable (written four months after the investigation was dropped) shows that “payments had been made [by BAE subcontractors]” to a Saudi prince who “was in a position to exert influence” on the contract. The UK’s Serious Fraud Office (SFO) also “found reasonable grounds” to believe that “another very senior Saudi official was the recipient of BAE payments”. International bribery monitoring groups also expressed “serious concerns” about the legality of the deal.

For shining a light on our governments’ actions, WikiLeaks founder Julian Assange is paying a heavy price. That’s why WikiLeaks and Assange deserve our full solidarity. Because of their bravery, we can better fight to consign New Labour’s terrible foreign policy to history.