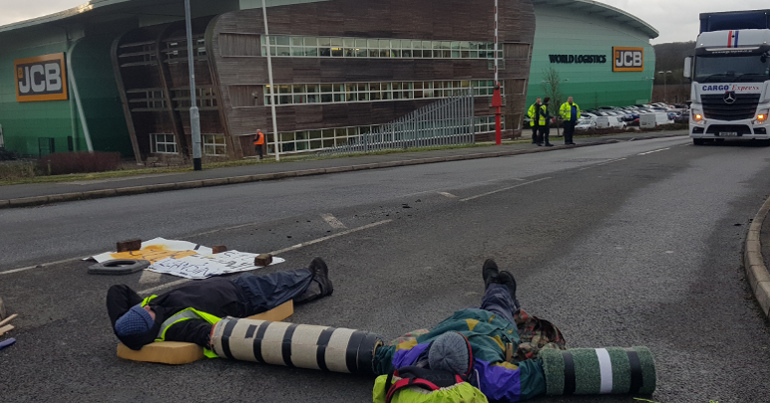 Four activists have been arrested after blockading JCB’s headquarters in Derbyshire. They were taking direct action against the bulldozer giant’s complicity in home demolitions in Palestine. The protesters embraced a wet Midlands morning, laying on the cold ground and locking themselves together using concrete arm tubes. Traffic to and from JCB’s headquarters was at a standstill for a number of hours.

Israel destroyed at least 460 Palestinian structures in 2018. And according to researchers at Corporate Occupation, JCB machines were used to destroy at least 130 of them.

One activist blockading the site said:

Demolitions carried out with JCB machinery resulted in at least 130 Palestinians being made homeless, including 31 children. JCB should take steps to ensure that its equipment cannot be used in Israel’s home demolitions. If the company does nothing, then they are complicit in Israel’s war crimes.

JCB continues to do nothing

Last year, Lawyers for Palestinian Human Rights (LPHR) wrote to JCB. LPHR stated that, by allowing its bulldozers to be used by Israeli authorities, JCB could be committing a criminal offence, and that “criminal liability of individuals within the company” could incur.

LPHR also said that the use of JCB equipment in demolishing the Palestinian Bedouin village of Khan al-Ahmar “may amount to aiding and abetting the war crime of forcible transfer”.

The activists blockading the bulldozer giant’s headquarters told The Canary:

JCB has ignored so many organisations that have told them that they are complicit in war crimes. Our job today is to disrupt JCB’s business and make sure that the company realises that it can not carry on as it is.

In 2018, JCB machinery was also used to destroy two Palestinian schools, as well to prepare the land for the demolition of the Bedouin school of Khan al-Ahmar.

Susannah, one of the activists blocking JCB’s headquarters, told The Canary:

I spent time in the village of Khan al-Ahmar, and spent time with the kids who knew that their homes were going to be demolished by JCB bulldozers. It’s an absolute tragedy for them and that’s why we’re here. JCB can not go on like this. They are complicit in war crimes in occupied Palestine.

JCB is owned by the billionaire Bamford family. It’s ironic that Carole Bamford, director of JCB, has received an OBE for services to children and families while JCB bulldozers tear down Palestinian children’s right to education.

According to her website, Carole has “been a hardworking supporter of the NSPCC for over 35 years”. She is also a supporter of “sustainable and holistic living”, with a “passion for organic farming”. Meanwhile, JCB bulldozers have torn up hundreds of old olive trees on small-scale Palestinian family farms.

The Bamford family is a massive donor to the Conservative Party. Between 2001 and 2010, JCB and the Bamford family reportedly donated around £4m to the Tories, and a further £1m in 2017. The Bamfords also donated a ‘six-figure sum’ to the Leave Campaign ahead of the Brexit referendum. Anthony Bamford received a lordship in 2013.

The family is one of the richest in the UK, with a net worth of $4.2bn. So it’s perhaps no wonder that JCB does nothing about war crimes in Palestine; not when there’s money to be made.

Featured image via activists (with permission)