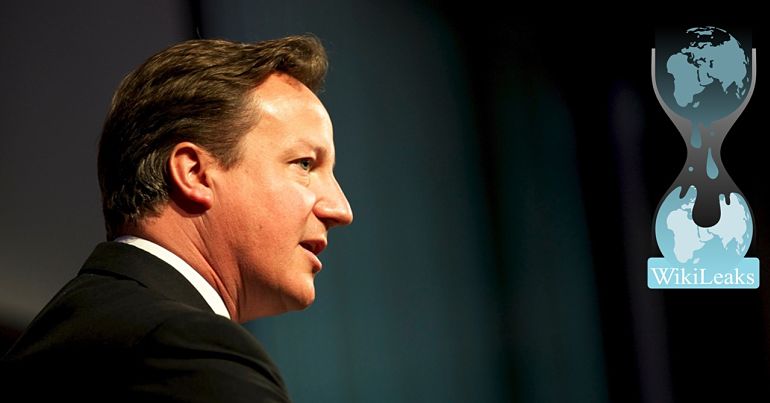 Notably, the cables show concern in Washington over ties between the Conservative Party and antisemitic parties in Europe.

Before Cameron became prime minister in May 2010, a cable revealed a top Hillary Clinton (US secretary of state, 2009-2013) aide describing his foreign policy approach as “unsure, inexperienced, oblique, and largely uncommitted”.

The aide, Sidney Blumenthal, also described his expectation of a Cameron government as:

more aristocratic and… narrowly Etonian than any Conservative government in recent history, sharply contrasting especially with the striving and classless perspective of the grocer’s daughter, Margaret Thatcher.

Under Cameron, the Conservatives’ ties with far-right and anisemitic parties in Europe concerned Washington.

According to a 2009 cable, Blumenthal suggested to Clinton that she “touch on the Conservative Party’s strange alliances with far right, anti-Semitic political parties on the continent” in an upcoming meeting with shadow foreign secretary William Hague.

Blumenthal also claimed Hague had been:

disingenuous about the nature of the far right parties the Tories are aligned with in Europe. Nobody in the UK or Europe is fooled.

The Conservative Party continues to share ties with alleged antisemites in Europe today. In 2018, for example, Hungarian PM Viktor Orbán thanked the Conservatives for supporting his government against the imposition of EU sanctions on Hungary. Orbán has been accused of antisemitism, Islamophobia, and attacking press freedoms. Despite this, Theresa May’s party joined France’s far-right National Rally (formerly National Front) to vote that Orbán did not pose a “clear risk of a serious breach of the EU founding values”.

According to one leak from 2008, Hague told the US embassy: “we want a pro-American regime. We need it. The world needs it.” He also said that he, “like many similar to him, considers America the other country to turn to”.

Shadow defence secretary Liam Fox, meanwhile, is noted as saying to the US ambassador in 2009 that the Conservatives:

desire to work closely with the U.S. if the Conservative Party wins power in next year’s general election [and] we intend to follow a much more pro-American profile in procurement.

Fox’s enthusiasm to form a government even closer to Washington than that of Tony Blair, who had followed the US into an illegal invasion in Iraq, is troubling.

The importance of WikiLeaks grows ever more

In a time of disgraced ‘liberal’ journalism, increased censorship, and government-funded ‘psychological operations‘, the importance of WikiLeaks grows ever more.

The rogue states of the West, however, seek to make an example of WikiLeaks founder Julian Assange. If he leaves his essential prison cell in the Ecuadorian embassy in London, he will almost certainly find himself very soon in the “kind of American torture pit Chelsea Manning had to endure”.

We must therefore fight Assange’s “arbitrary detention” by telling our government to observe international law, and by continuing to support the crucial work of WikiLeaks.