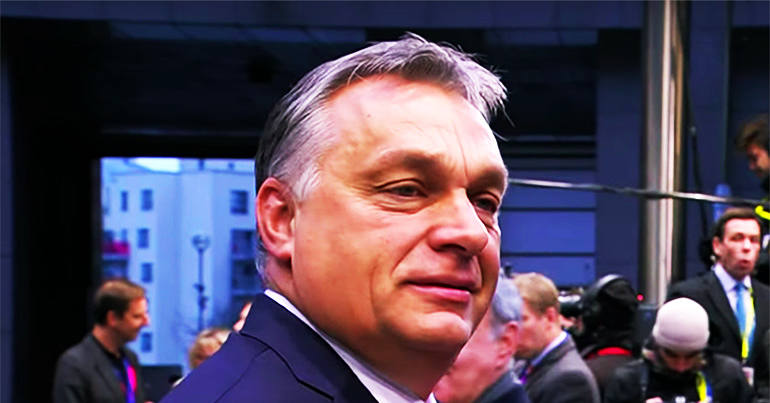 Hungarian prime minister Viktor Orbán has sent Conservative MEPs a letter thanking them for voting against the censure of his far-right government.

And while the Tories are usually happy to share the little gratitude they receive, they probably didn’t want this particular ‘thank you’ note to go public.

The worst kind of ‘thank you’

Yahoo Finance broke the story on Monday 24 September. It discovered that Tory MEPs had received the same letter Orbán sent to Nicolas Bay of France’s far-right National Front (now ‘National Rally‘), thanking him for support in the European parliament:

EXCL: Conservative MEPs have received a signed letter from Viktor Orban thanking them for their "solidarity" in the recent Hungary sanctions vote https://t.co/3kF09NpRGc

The parliament was voting on whether Orbán’s party Fidesz was at “clear risk of a serious breach of the EU founding values”. MEPs approved a proposal to push ahead with sanctions against his government by 448 votes to 197.

Orbán later wrote to all those who supported him:

I appreciate the support you’ve shown towards national sovereignty and solidarity during the vote.

Those thanks extended to the huge majority of Conservative MEPs that backed him.

Twitter was quick to hit out at the Conservatives for apparently standing in “solidarity” with a government accused of promoting Islamophobia, antisemitism, and cutting back press freedom:

What a polite fascist.
It must be nice to feel appreciated by someone, eh? #Tories?
You are #UnfitToGovern , you do not represent the majority of people who, y'know – see fascism as something to fight, not prop up.#GeneralElectionNow https://t.co/tFCbYf0s6o

Labour MEP Paul Brennan, meanwhile, wondered if he would also be receiving a note for opposing Orbán’s government:

I hope he’s sent me one expressing his disappointment in me and my Labour colleagues for voting with the @TheProgressives for action to be taken against the authoritarian moves of the Orbán government in Hungary. I’d like to frame it & hang it in my office @labourpress

But so far, it looks like the Hungarian leader has only written to his friends.

For many on Twitter, the letter highlighted the British government’s glaring hypocrisy on antisemitism.

Apparently, people don’t like it when Tories accuse their opponents of failing to tackle racism while receiving far-right thank you notes:

So the racist Victor Orban has sent a letter, of 'solidarity' to the Tory party, for there support,

Says everything you need to know about this lot

They call out racism in public but in the background they fully support it. https://t.co/Cv1f3HoD5Z

Others pointed to the fact that the letter might have had something to do with a post-Brexit trade deal:

Tory MEPs got a personal thankyou letter from far-right Hungarian leader Viktor Orban
The letter thanked them for their "solidarity" after they were accused of propping him up in exchange for support on Brexit
https://t.co/lhtvpc2EgT

That Hungary-UK trade Deal can't be far off…??? #ERG are working on it right now

Twitter users also called attention to the unbalanced media focus on Labour’s antisemitism row as the Tories cosy up to an alleged antisemite.

And some were sceptical that anything would change this time around:

This is going to be massively all over the media. Marr, Peston, Newsnight, Channel 4, sky news, Guardian, Times, Telegraph. They’ll all be on to this. Deffo. https://t.co/YKbrHoAL33

You literally can't make this stuff up anymore. The double standards the MSM have applied to this are absolutely disgusting. It shows beyond doubt that they have no genuine concern for fighting the scourge of racism & AS in society if they are so eager to turn a blind eye to this

The state of politics in this country when this isn't bigger news. Orban is a dangerous far-right authoritarian, and the Conservative party are helping him. https://t.co/125srozZS0

The BBC is still asking Jeremy Corbyn if he’s an antisemite. This is while Tory MEPs are receiving fan mail from Viktor Orbán, one of Europe’s most dangerous far-right leaders. And no matter how antisemitic and racist Orbán’s campaigns are, Conservatives including Michael Gove are still refusing to condemn him outright.

It’s almost as if the Tories didn’t really have that much interest in standing up to the far right.

Maybe someone should send them a letter about it.

– Write to your local MEP so you can get the issues that matter on the table.