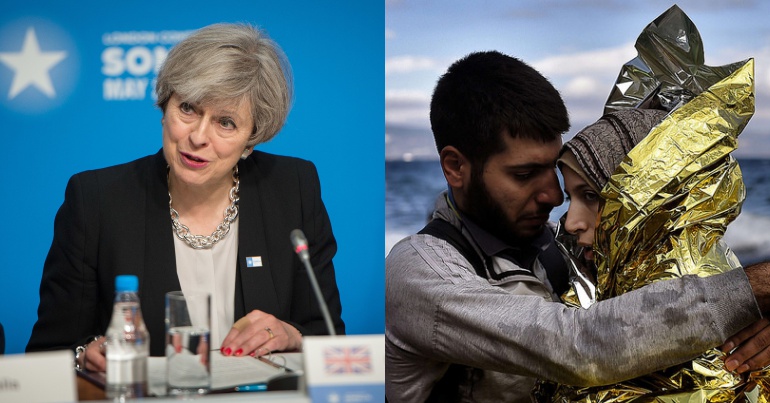 A clinical psychiatrist for Doctors Without Borders (Médecins Sans Frontières) has written a damning open letter. He works with refugees on the Greek “island prison” of Lesbos. Around 9,000 children and adults (many fleeing from Syria) ‘live’ in appalling conditions in the Moria camp.

Back in the UK, meanwhile, Theresa May’s government is failing the refugee community. That’s despite the fact that Britain has launched devastating airstrikes that have only added to the ongoing suffering in Syria, leaving too many people with an impossible choice to risk their lives fleeing or risk their lives staying.

The “appalling” situation of refugees goes on

Dr Alessandro Barberio has worked as a clinical psychiatrist for 14 years. But his open letter lays bare just how appalling conditions are on Lesbos. He said:

In all of my years of medical practice, I have never witnessed such overwhelming numbers of people suffering from serious mental health conditions as I am witnessing now amongst refugees on the island of Lesbos.

As Barberio explained, Moria camp “has a maximum capacity of 3,100 people”. But it’s currently “bursting at the seams”. There are now over 9,000 people in Moria and a third of these are children. All live in “appalling conditions”.

What compounds his evidence is that these are people who’ve already:

been subjected to extreme forms of torture and violence, both in their countries of origin and during their journey.

His letter provides a harrowing account outlining the physical and mental state of Moria’s residents. And these people now face the added dangers of:

appalling living conditions and exposure to constant violence, the lack of freedom and rights accorded to migrants, the severe deterioration of health and mental health.

In September 2015, devastating images of three-year-old Alan Kurdi – who drowned fleeing Syria – shocked the world. The plight of refugees from Syria and other war-ravaged countries still made headline news in 2016. But since then – although barely reported in the UK media now – the crisis hasn’t stopped. When European borders closed, thousands of people were stranded. And as Barberio states, this has led to an “outright violation of human rights” which has caused “a state of emergency” in places like Moria.

The UK government is fully complicit in this ‘violation’.

According to Refugee Action, there were around 4.9 million Syrian refugees worldwide in 2016. At this point, the UK pledged to resettle 20,000 Syrians. In 2018, 13.1 million Syrians need humanitarian assistance, but the UK has still only met half of its 2016 target.

And the plight of those labelled ‘asylum seekers’ or ‘migrants’ in the UK is hardly better. Because May’s government detains children and operates a brutal deportation policy.

So May’s government really should listen to Barberio’s words. Not least because, as he points out:

the current situation could drastically deteriorate even within the coming weeks, with an escalation of violence that would plunge the island into extreme chaos.

A new “humanitarian emergency” on the horizon in Idlib

Barberio also raises growing concerns over the plight of Syrians in the Idlib province. This area has “been used as a dumping ground of sorts for civilians who are fleeing other war zones inside Syria”. And now, the UN has warned that possible attacks on Idlib have:

the potential to create a humanitarian emergency at a scale not yet seen through this crisis.

As Russia and Syria increase air attacks in the area, Donald Trump has said he would be “very angry” if these caused civilian deaths. And he’s right to worry. But in 2017, US-led coalition airstrikes in Iraq and Syria rose by nearly 50%, causing a 215% rise in civilian casualties and a 55% rise in civilian injuries – mostly women and children. The US and UK are both part of this coalition – and casualties are still rising.

Turkey’s President Recep Tayyip Erdoğan now claims to have avoided “a humanitarian crisis” in Idlib. But the fact that Erdoğan himself is also an alleged war criminal and known human rights abuser demonstrates just how complex the situation is.

On 10 September, a cross-party parliamentary group published a report examining the UK government’s role in Syria and other global conflicts. It unequivocally condemned the “price” of government “inaction” regarding Syria and warned about the deteriorating situation in Idlib. As Dr Kate Ferguson, director of research and policy at Protection Approaches, said in response to this report:

At a time of rising global violence and instability, when atrocity crimes are becoming more common, it is crucial that the UK leads by example in strengthening its national approach to more timely and effective prediction and prevention of these terrible crimes.

Barberio’s letter explains perfectly why this is so important too. The UK and the whole of Europe must to listen to Barberio. The refugee crisis may not be headline news at the moment. But it really should be.

Until borders open, and until each and every child, woman and man is safe, this is a crisis that we can’t ignore. We must demand an end to the violent indifference of May’s government right now.

– Write to your MP and ask them to tell Theresa May and the home secretary to support refugees, asylum seekers and migrants. Also ask them to recognise and support Rojava, and to stop selling arms to countries like Saudi Arabia and Turkey which have been fuelling the Syrian conflict from the very start.