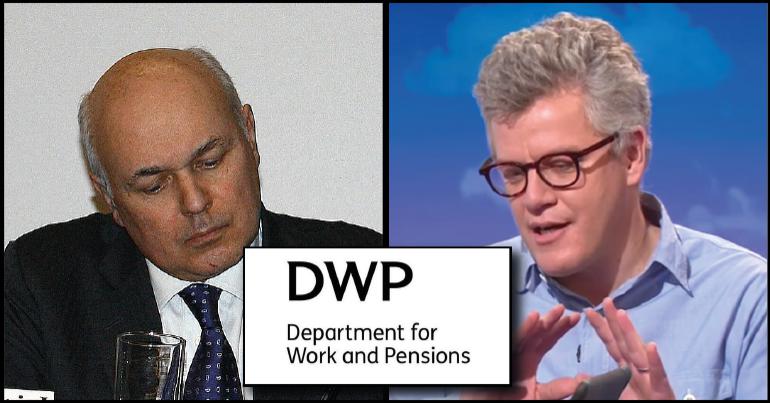 On 23 September, the Centre for Labour and Social Studies (CLASS) shared a video of Owen Jones. In it, he said Iain Duncan Smith and the Conservative Party had “waged war” on the poor. The barrister Jolyon Maugham later said it was wrong to describe the government as ‘waging war’ on anyone: 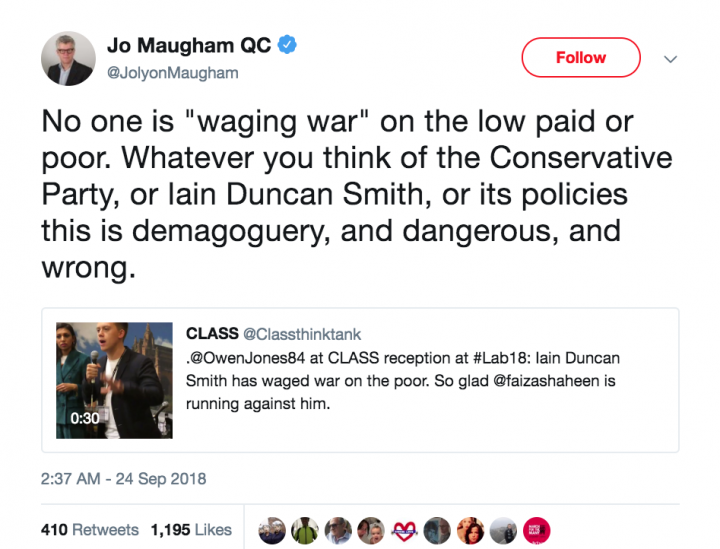 There were several problems with his assertion. The one that really sticks out is that Maugham himself has – you guessed it – previously described the Tories as waging war on the electorate.

In the video for CLASS, Jones said:

like one man in Scotland, who’s half-paralysed – half-blind – could barely speak – found fit-for-work – the day after the letter arrived, he died. And his 13-year-old son wrote a letter to Iain Duncan Smith; the cruelty of that man.

.@OwenJones84 at CLASS reception at #Lab18: Iain Duncan Smith has waged war on the poor. So glad @faizashaheen is running against him. pic.twitter.com/JjLom6J9GF

Jones and CLASS are far from the only people to speak out about the Tories’ war on the poor and disabled. On 24 September, The Canary reported that the UN is opening its fifth investigation into the DWP. The UN has previously accused the DWP of “grave” and “systematic” violations of disabled people’s human rights.

It turned out Maugham is actually guilty of using the sort of rhetoric he’s now deriding:

Jones himself pulled Maugham up on this: 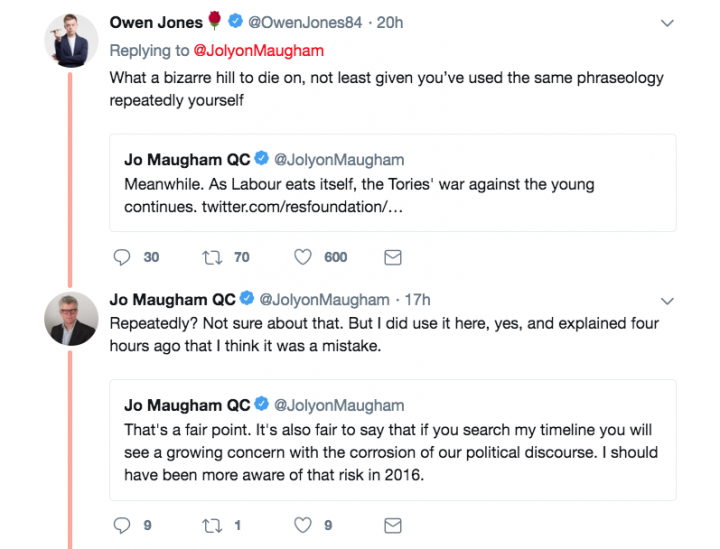 This captures a common feeling that’s developed in the past few years among those who’ve yet to feel austerity’s impact. Maugham is far from the worst for this, but there’s a constant suggestion that the problem isn’t austerity and its effects; the problem isn’t the Tories and their murderous policies – the problem is how people conduct themselves on Twitter.

This puts those affected by austerity in a double bind. On the one hand, the Tories are driving them to death. On the other hand, if they vent their rage, barristers, minor celebrities, and newspaper columnists will call them trolls who are ruining politics.

To many, it’s out of sight, out of mind. Before social media, it was easy to pretend the victims of politics were just statistics. Now that people are standing up and fighting against what the government is doing to them, the comfortable classes are just as disgusted by the rabble as they are by the Tory Party.

Thousands of disabled people died after being declared fit for work. I wouldn’t call that a ‘war’ – it’s far crueller, and more cowardly, than that. https://t.co/LKqGrhHI93

It's not so much a "war" in the traditional military sense, as a systematic, prolonged, intentional and thorough attempt to murder as many people as possible via bureaucracy

Sometimes it’s right to criticise rhetoric. But we’re at a point now where one report predicted that Tory and Lib Dem austerity killed 120,000 people and counting. So how does Maugham think we should describe austerity?

Somehow, I don’t think you’re going to fit ‘STOP THE TORIES FROM VISITING PROFOUNDLY WRONG CONSEQUENCES OF THE FINANCIAL CRISIS ON THOSE WHO DON’T DESERVE IT, PLEASE’ on a placard. And that’s even if it was a consequence, rather than a choice to transfer wealth from the poor to the rich.

Having a clear message that cuts through is important. The unavoidable issue is that people are dying. If you don’t think 120,000 dead is a ‘war’, that’s fine; you don’t have a clue what’s going to stop those people dying, though, so step aside and let people with bigger concerns than language do the work.

– Read more about CLASS – the Centre for Labour and Social Studies.

– Read more from The Canary about the DWP and its ‘grave and systematic’ abuses against human rights.

– Support the blogs Universal Credit Sufferer and The Poor Side of Life. Also, follow I was a JSA claimant, BENEFITS NEWS and Paula Peters on Twitter. Get involved with Disabled People Against Cuts (DPAC), fighting for disabled people’s rights.

– Check out articles on austerity and just look around you to make your own mind up.