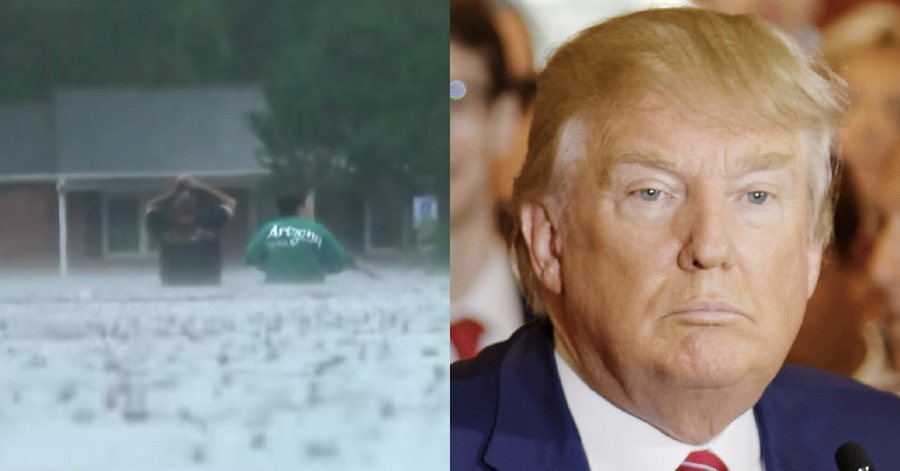 At least 43 people died when Hurricane Florence struck the US. And yet again, most of those hit the hardest were also the poorest and most vulnerable people.

But Donald Trump’s response to this disaster was shocking. Once more, it looks like he’s distracting the public and hiding the truth.

On 14 September, Hurricane Florence made landfall in North Carolina, also affecting South Carolina and Virginia. Among the dead were two women heading to “a mental health facility”. Wendy Newton and Nicolette Green died while locked in the back of a sheriff’s van. But as Green’s family said:

These women were not inmates or criminals. They were women who voluntarily sought help.

Their names were Nicolette Green and Wendy Newton. pic.twitter.com/B2OVJ9jao8

As Democracy Now! has also reported, they “didn’t have to die”:

"Wendy Newton and Nicolette Green didn’t have to die. Trapped in the back of a sheriff’s van in rural South Carolina, the two mental health patients in their mid-40s were being transported… https://t.co/uxhxtVnSY4

Meanwhile, Trump made only “carefully stage-managed visit[s] to the region”. And in the face of this tragedy, he made an idiotic statement, saying the hurricane was:

One of the wettest we’ve ever seen from the standpoint of water.

“Too poor to escape”

Many people “were trapped, too poor to escape”, and so couldn’t follow mandatory evacuation orders. Authorities also refused to relocate prisoners.

And the hurricane caused another tragedy:

The destructive deluge was further compounded when coal ash ponds and fetid hog manure lagoons were overwhelmed, sending their toxic contents running with the floodwaters into nearby communities of mostly poor people of color.

The storm also killed millions of animals. And the horrific conditions that corporations kept these animals in created a toxic swamp:

Jesus. The reason we haven’t seen masses of dead animals in this storm is because the photos were so controversial after earlier storms that now companies lock the barns & let the animals drown inside, where no one can take a photo. https://t.co/Xgg7aNTMcf

Industrialised farming has devastated small farmers. Yet the excuse for profit-driven intensive farming is also to provide ‘cheaper food’:

It felt like a horror show out here in rural America over past 2 decades as farms lost, consolidation into fewer farms, control by a handful of processors took place and we who objected were greeted by calls for ever cheaper food.

And the crisis is far from over, as flood waters are still rising:

Hurricane Florence is by no means done with the Carolinas, where some rivers are still rising and thousands of people were told to plan to leave their homes on Monday https://t.co/AJpa6HakSt pic.twitter.com/O0tkmrObHw

Disaster management in the mind of Trump…

Trump’s response to the hurricane, meanwhile, was “surreal”:

Trump’s storm “briefing” in N.C. was surreal. First, nobody briefed him; politicians mostly just thanked him. Second, he praised local officials for their “talent.” Third, he said we have the strongest economy ever. Fourth, he asked about Lake Norman, where his golf course is.

Trump to a homeowner in New Bern, NC, who had a yacht wash up in his backyard: “At least you got a nice boat out of the deal.” pic.twitter.com/twtT3it8ul

But there’s a very sinister side to these ‘surreal’ comments. He spoke mostly to white communities in “command centers and aid stations staffed mostly by white people”. This ignores the fact that a “disproportionate number” of Black people “live in low-income neighbourhoods or buildings”, where homes are often substandard and people don’t “have the resources” to relocate.

13 years on, the devastating message of Hurricane Katrina still hasn’t been heard.

There’s also a very real and present danger that Trump wanted to hide something else. Documents released just before Florence hit showed that the government had moved millions of dollars from the Federal Emergency Management Agency (FEMA) – which handles disaster funds – to Immigration and Customs Enforcement (ICE):

Did the trump administration REALLY just transfer 9.8 million dollars from FEMA to ICE when hurricane Florence is expected to hit in the next 36 hours? Impeccable timing…

ICE has never been busier. Because prosecutions, arrests, deportations, and mistreatment of immigrant children have soared under Trump.

This disaster is far from over, though. And even when storm waters fall, another hurricane – sadly – won’t be far away. Because their “intensity, frequency, and duration” is directly linked to climate change. So the US government needs to learn from this hurricane, and learn fast – before it’s too late. Unfortunately, under the climate-change-denying Trump, that seems incredibly unlikely.

We all deserve so much better.