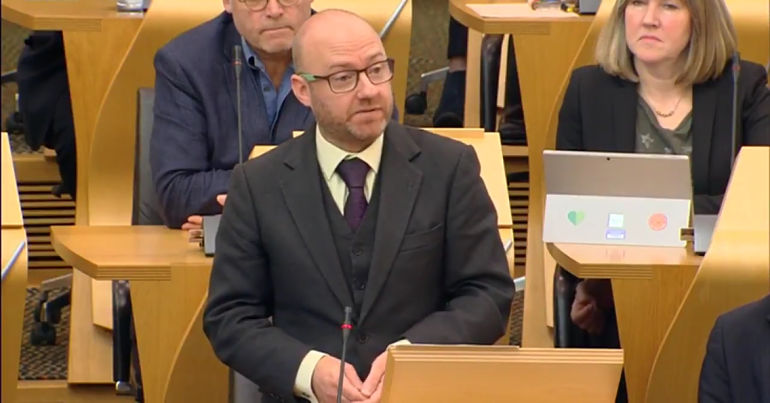 On 24 September, Scottish Green Party MSPs received some good news. It came after Police Scotland confirmed it no longer planned to label anti-fracking protesters as “domestic extremists”. The Ferret reported on 16 September that Police Scotland had previously included those who peacefully oppose fracking “alongside banned neo-Nazi terrorist groups, Scottish Dawn and National Action”.

Harvie said, both in an article and in the Scottish parliament: “anti-fracking campaigners who exercise their democratic right to protest are heroes”:

.@patrickharvie asks the First Minister about the rights of fracking campaigners, who have been labelled “domestic extremists” by Police Scotland@NicolaSturgeon says she will always respect the right of people making peaceful protests #FMQs pic.twitter.com/I4EWSlm3M2

As The National reports, a senior Police Scotland official has now written to the Scottish Parliament’s justice sub-committee on policing. He did so to clarify the labelling of anti-fracking protesters. Detective Chief Superintendent Gerry Mclean wrote:

This paragraph was contained within a wider and diverse section of the annual police plan under the heading of Domestic Extremism.

Police Scotland does not consider any form of lawful and peaceful protest to constitute domestic extremism; however, we accept that from a presentational perspective a misinterpretation of this position may have been given from the way this small section of the annual police plan was worded and presented.

The right to lawful and peaceful protest is an integral part of our society.

Law-abiding citizens who wish to protest peacefully should not have to be concerned about the threat – perceived or real – of being labelled a domestic extremist.

On 19th I wrote Police Scotland https://t.co/HeeTarhbqc re their branding of protesters 'Domestic Extremists'. Their explanation https://t.co/9wVR9ERojC and removal of that offensive language is welcome. #peacefulprotest

Green MSP John Finnie, the sub-committee convener, welcomed the clarification:
"Changing the wording in the Annual Police Plan to remove this inference is exactly the right thing to do.”https://t.co/kxVBKbSUg5

So it’s a victory for anti-fracking protesters across Scotland and for the Scottish Green Party MSPs. Furthermore, let’s hope Police Scotland has set a precedent for other police forces across the UK.