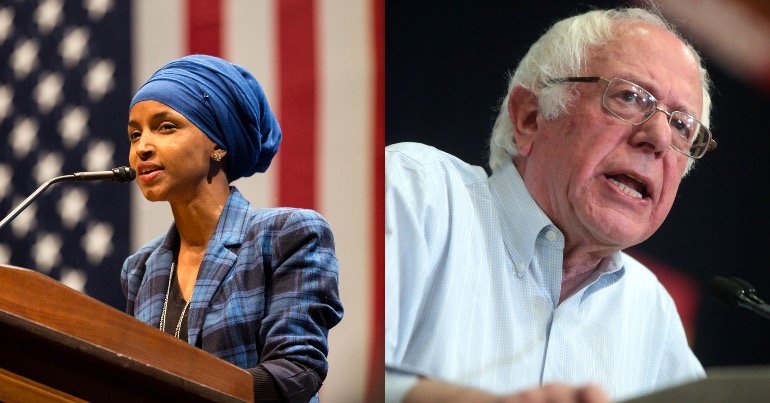 Bernie Sanders has come out in support of progressive congresswoman Ilhan Omar. Sanders has been quiet up until now about false accusations that Omar is antisemitic. She previously criticised how some people “push for allegiance to a foreign country”. When discussing Palestinian rights, this means she and others like her “get to be labeled, and that’s the end of the discussion”. For saying this, she has been accused of antisemitism. But now, Sanders has announced his support of her.

In his statement released on 6 March, he said:

Anti-Semitism is a hateful and dangerous ideology which must be vigorously opposed in the United States and around the world.

But he went on, saying:

We must not, however, equate anti-Semitism with legitimate criticism of the right-wing, Netanyahu government in Israel. Rather, we must develop an even-handed Middle East policy which brings Israelis and Palestinians together for a lasting peace.

As a result, he insisted:

What I fear is going on in the House now is an effort to target Congresswoman Omar as a way of stifling that debate. That’s wrong.

The Democratic Party's throwing of @IlhanMN under the bus is an (unfortunately unsurprising) disgrace. She raised entirely legitimate concerns about US support for the murderous apartheid government of Israel & the subservience of US politicians to the agenda of a foreign power.

He followed on, saying:

What @IlhanMN is doing–taking on major, destructive US foreign policy with refreshing honestly and clarity–is dangerous in Washington DC. She is going to face the full force of both parties because of this. She is a rare voice and deserves our defense. It is going to be ugly.

And Scahill was not alone. Author Naomi Klein also tweeted about Omar, calling her a “powerful moral voice”:

This is so important. @IlhanMN is a powerful moral voice at time when very few (even progressive) Democrats speak clearly and knowledgeably on foreign policy. She deserves unreserved support. #IStandWithIlhan https://t.co/5dvnYviJww

Omar herself has explained why she thinks Democrats and Republicans are attacking her:

I am told everyday that I am anti-American if I am not pro-Israel. I find that to be problematic and I am not alone. I just happen to be willing to speak up on it and open myself to attacks.

Journalist Rania Khalek, meanwhile, has pointed out that political elites and the media are:

Attacking the progressive wing of the Democratic party.

She went further, explaining that Sanders is being attacked in the same way:

The establishment is getting so desperate they’re even starting to Russia-gate anyone to the left of the Democratic party.

The Democratic establishment’s attack on @IlhanMN is part of a long pattern of the corporate wing of the party attacking the left, especially on issues related to foreign policy. They’re going to crank up the attacks even more as the Dem primary approaches pic.twitter.com/08aoXrea64

In spite of attempts to undermine Sanders’ current run to be a presidential candidate, he is still ahead of his competitors. According to a poll carried out for the Intercept:

The only potential candidate who polled better with African-Americans than Sanders, according to the poll by Morning Consult, is former Vice President Joe Biden, who has not announced a campaign.

Omar is right to question blind US support of Israel. This is not antisemitic. And Bernie Sanders should not have to point this out.

Political elites still seem intent on attacking Omar. But bullying progressives like Omar and Sanders will not win them the election in 2020.