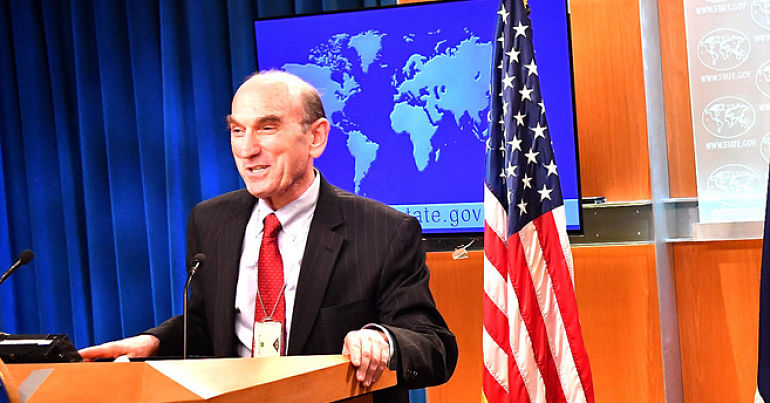 US special envoy to Venezuela Elliott Abrams ruled out direct US military action in Venezuela during a phone conversation with Russian pranksters. The pranksters, known as Vovan and Lexus, posed as Swiss officials and managed to keep Abrams talking for over 20 minutes.

Posing as the Swiss president, one of the pranksters told Abrams:

You know… what I worry about? If [Venezuelan opposition leader] Mr. Guaidó will lose… we could look like fools.

I don’t think so… What certainly I can say the Swiss government can take note of is that this is a dispute… and if there is a dispute then it would seem that the better wisdom would be to freeze the [Venezuelan bank] accounts.

Now, it’s really not possible that the monies in these accounts are gotten legally. I mean, you know, the president of a country cannot have hundreds of millions of dollars in a personal account.

These seem like particularly strange comments from a man serving under billionaire Donald Trump.

Abrams: “we think it is useful to keep them nervous”

Talking with another ‘Swiss official’, meanwhile, Abrams gave revealing comments about US military action in Venezuela. The ‘official’ asked Abrams: “what are your thoughts about possible military aid to [self-declared] president Guaidó?”

You know, we are not going to do that. Unless the [Maduro] regime does something completely crazy like attacking the US embassy.

He then spoke about Washington’s efforts to spook Venezuelan officials:

But our information suggests that people in the [Maduro] regime and in the [Venezuelan] military are actually nervous about a US invasion. And we think it is useful to keep them nervous.

When I give private briefings to members of congress, this is exactly what I say to them: ‘we are not trying to make you in congress nervous. We are trying to make the Venezuelan military nervous. And we think it is a mistake tactically to give them endless reassurances that there will never be American military action.’

The conversation also focused on US congress member Ilhan Omar, who on 13 February questioned Abrams about his complicity in “war crimes, crimes against humanity [and] genocide” in Central America.

The ‘Swiss president’ asked Abrams “who is that strange woman who accused you of some crimes?”.

There is a tradition of being extremely friendly and nice – called Minnesota nice. And she apparently is trying to destroy this image.

So it seems, in Abrams’ view, that Omar was being ‘mean’ for highlighting his bloodstained legacy throughout Latin America.

Though Abrams ruled out direct US military action, the main threat of US intervention remains via covertly funded operations channelled through the Colombian or Brazilian military. US sanctions, meanwhile, have long been economically strangling the country’s population.

Those opposed to US imperialism should continue to condemn any form of intervention: diplomatic, economic, and military.

Featured image via US department of state/Flickr