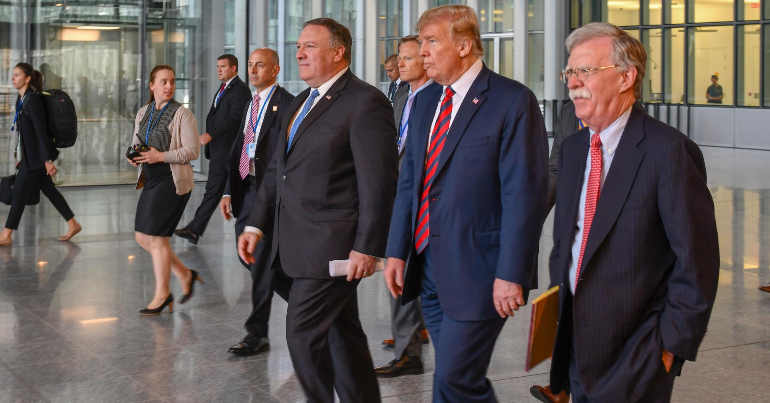 Amid the ongoing coup attempt in Venezuela, right-wing politicians have been crying out about the country’s deportation of certain US journalists. But there is ample reason never to take the US seriously when it talks about media freedom.

Remember who called the media “the enemy of the people”?

The US has a long, bloody history of interfering in Latin American politics. Today, it’s passionately backing an armed and violent opposition in Venezuela. Donald Trump and his national security advisor John Bolton are both insisting that “all options are on the table” in the country. Senator Marco Rubio, meanwhile, has launched thinly veiled death threats at Venezuelan president Nicolás Maduro.

In this context, we must remember that it was Trump – not Maduro – who called media outlets “the enemy of the people”. Trump has also bullied journalists, kicked them out of press conferences, detained them for days, and revoked their credentials. And he’s called a man who physically attacked a reporter “my kind of guy”.

Reporters Without Borders (RSF), meanwhile, suggests that Trump’s “violent anti-press rhetoric” has “fostered further decline in journalists’ right to report” in the US. It also reminds us that:

Then, of course, we have recent news like the following:

BREAKING: The Trump Administration has made a shameful decision to stop reporting the number of civilians killed by US military action.

The brief detainment and deportation of another US journalist this week certainly raises questions about the Venezuelan government’s treatment of foreign reporters. Anti-coup attorney and former government adviser Eva Golinger has called it “extremely problematic and a very dangerous move”; largely because Trump’s warmongers are “waiting for any excuse to intervene”. Anti-coup journalists have made similar arguments.

Coup supporters (including the BBC and the Guardian) have been pushing a lot of fake news and disinformation recently. So any fuel the Venezuelan government adds to the fire itself is just an own goal; especially when it has long protected opponents’ right to insult it openly on national media outlets.

Venezuela’s record is not the issue, though. Because no record would justify hostile foreign intervention. And even if it did, the US would need to flip its foreign policy on its head first to stay consistent. Why? Well…

The above are longstanding US allies. They’re also notoriously poor on media rights. For example:

So the next time the US waxes lyrical about media freedom, we don’t just need to ask it about its own record. We need to ask about the records of its key global allies too. Because as long as it keeps turning a blind eye to those records, it’s impossible to take any US lecturing on the matter seriously.