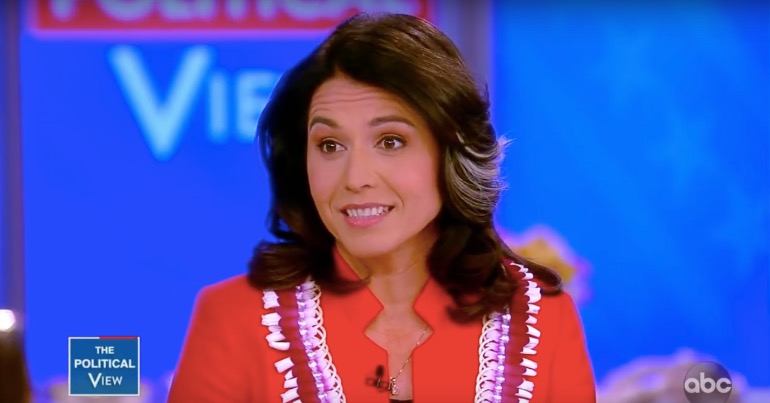 As the US-backed coup attempt in Venezuela intensifies, many pro-intervention pundits are still refusing to condemn Washington’s warmongering. Instead, they’ve been echoing establishment propaganda. Luckily, on daytime show The View, congresswoman Tulsi Gabbard was there to school the panel with an important dose of truth.

Gabbard was answering the following question from a pro-intervention pundit:

Why are you so against intervention in Venezuela: not military intervention, but what we are doing?

The pundit was referring to the economic warfare being conducted by the US, to which Gabbard brilliantly responded:

every time the United States, and particularly in Latin America, has gotten involved in regime change – using different tools to enact that regime change, there have been both short- and long-term devastating impacts. If there are ways that we can work with surrounding countries to try to get humanitarian aid into people there, then we should be doing that. But for the United States to go in and choose who should be the leader of Venezuela, that is not something that serves the interests of the Venezuelan people; that’s something that they need to determine themselves.

The pundit then interrupted, claiming:

But the US is not choosing who’s going to be the leader of Venezuela [sic – it is]… It’s millions of Venezuelans marching on the streets… Do you put military intervention on the same level that you put economic and diplomatic efforts?

Gabbard was quick to set the record straight, stating:

The United States has used both military, CIA, sanctions, and other tools to intervene and enact regime change in countries around the world. Iran is a great example. The CIA led a covert operation to overthrow the government in Iran decades ago in Mossadegh. This led to decades upon decades of hardship, and suffering, and authoritarian governments, and has led us to the place where we’re dealing with many challenges

Gabbard is absolutely spot on, and eloquently dismantles the dangerous rhetoric of pro-intervention mainstream media pundits. As The Canary previously reported, a former UN expert slammed the media for “manufacturing consent” for regime change and judged US interventionist tactics to be a “violation of international law“. A priest working with Venezuelan military defectors has also admitted that ‘US aid’ is a ploy designed to ‘start a revolt’ against the government. Numerous pro-coup stories that coup supporters have championed have also been debunked.

The Venezuelan government is not beyond critique. But it’s important that the truth is heard, and Tulsi Gabbard is making sure that happens. Washington’s record on intervention should speak for itself. For the sake of the Venezuelan people, we cannot allow another devastating coup to unfold on the pretence of lies and deception.