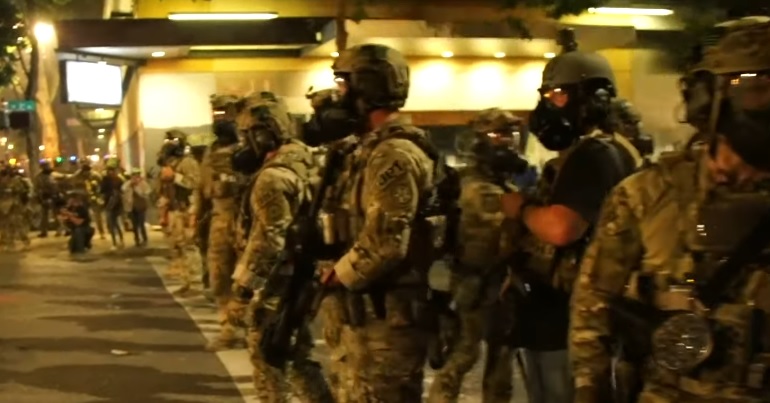 On 27 July The Canary spoke to journalist Wyatt Reed, who is a contributor for the Roanoke Times, MintPress News and the Grayzone. He’s been covering the protests in Portland, Oregon.

Wyatt, where are you right now?

Right now, I’m outside the federal courthouse here in Portland, Oregon where protests are ongoing against what is widely seen as a federal occupation by US president Donald Trump of Portland city streets.

So currently we are at a bit of a low. Most of the days are a little bit slower. Folks are eating, hanging around, enjoying each other’s company, preparing for what’s to come, the inevitable repression. Because as soon as it gets dark, that’s when things change. The tear gas comes out, the police make an appearance. Virtually every night, every night that I’ve been here they have been attacking, beating, arresting, and sort of indiscriminately hitting with chemical weapons. Not just protesters but everyone in the vicinity.

This includes journalists. I myself was shot directly with a tear gas canister while sitting by myself, posing zero threat. I was about five feet at least from anyone else and nowhere near any militant protesters whatsoever. But nonetheless I was shot directly in the hands. They were aiming for my camera.

I’m not the only journalist who’s been treated this way. Just last night I met a… after the end of last night’s raid by the feds on the encampment, I was able to witness one other journalist who was hit with a marker round in the arm and she was bleeding pretty badly. I spoke with her and her colleague, her photographer, who told me that he had had two cameras that the feds had shot at with pepper bullets.

So this is kind of a recurring theme. The police are attacking not just the protesters: journalists, medics, bystanders even. I’ve met various people who for whatever reason find themselves in the vicinity of or several blocks away even of these protests, and due to the police repression that’s become a nightly occurrence they will be stranded in one part of the city, trapped by these massive, massive clouds of tear gas that take over the entire park and the surrounding city streets. Many, many tenants that live in the buildings around here have had to either leave or are complaining profusely because they are teargassed essentially every night by the federal agents who are currently awaiting their next round of repression in the building behind me.

Who is protesting, and what, from what you have seen, do the protesters want?

So protesters are one demand. And it’s extremely clear what that is: they want these federal agents gone. They want them out, out of their city, out of this courthouse. Gone. Period.

There are a number of other demands, not quite as central to this struggle in terms of things like access to housing, and employment, and food, especially amid the pandemic for Portland’s homeless population which is pretty numerous and which has had an outsize impact in a lot of these protests in the sense that when we speak about who is it that is most brutalized by this system, and with the least to lose, the most willing to give themselves up sometimes to something that they see as bigger than themselves – well a lot of those who do not have access to housing have really been stepping up in terms of organizing the encampment, and in terms of keeping protesters fed.

So something that we’ve seen in a lot of cities across the United States has been this kind of mutual aid networks or attempts to feed the people, ‘feed the people’ initiatives. Oftentimes this will end up being done by the same population which is served. So in this case Portland’s homeless population are among the most important for keeping Riot Ribs up and running and providing food for not just themselves but everyone, all the protesters, and even journalists. They’ll give food to pretty much anyone who’s not a cop.

How do you respond to the claims that the protesters have been hostile? Some journalists have been treated in such a manner, for example, Michael Tracey. There’s also the Portland police reports of shots being fired and of “ammunition and destructive devices recovered at Lownsdale Square Park”.

Well, I am not the protesters. So I certainly can’t respond for them, but I would say that I take basically everything that the Department of Homeland Security says about these protesters with a grain of salt. They describe them as almost these sort of mindless, unthinking savages. The reality is I have been treated with nothing but kindness while I’ve been here. I did have a gentleman who… thought that I was recording him as we were setting up for this interview. And he asked me why I was doing that and I told him I was recording myself. And he said: ‘Oh okay, I’m sorry.’… So I think there is a willingness to cooperate with media and a general understanding that, if people are hostile to the media, then no-one will tell their story. …

This is the attitude that the federal agents are displaying to everyone outside of this building regardless of whether or not they are actively aiding and abetting any criminal behaviour. It’s a collective punishment that’s being deployed tonight as it is every night.

You have covered protests in Latin America. We have talked about Bolivia. Do you see similarities between tactics being deployed by US-trained forces, in that region and here?

Absolutely! The playbook is the same although the exact tactics vary. And, of course, here in the United States it seems that for now at least we are still unlikely to see live rounds being fired into protesters the same way the Bolivian army unloaded on protesters there in the two massacres of November 2019.

So we aren’t at quite the same level of violence being deployed by the security state, but we’re at a tipping point I think in terms of how Americans are conceptualizing their government, seeing it as an occupying force to be resisted, not just through the ballot box, not just rhetorically, but through actual force – through laying their lives down if necessary with the understanding that, if they are arrested by these police, they can face felony charges – assaulting an officer – and end up going to jail for decades.

So the fact that people are out here and they’re so willing – such a broad swathe of American society – to lay down their lives in this fight as they see it against fascism – I think that says a lot about where we are collectively and where we’re headed.

This kind of tactic, obviously, is something that Trump is looking to deploy more and more heading into November. This has now been replicated in cities such as Albuquerque, New Mexico; Kansas City, Missouri, as part of what Donald Trump is calling Operation Legend. The justification that’s being used for Operation Legend varies: it’s in many cases something to do with crime. Now just a generic crime justification is given. So it’s not uniform in how it’s being applied but the common theme is that Donald Trump is able to control effectively and dictate effectively what happens on a ground level. So he is able to effectively bypass any objections from some kind of Democratic leadership and immediately… send in the troops. And all of a sudden we see these police forces are not necessarily accountable to their mayors or to their city councils.

In many cases they seem to operate with more autonomy than those who supposedly call the shots. So in the sense that they are accountable to the city – sure, Portland Police aren’t colluding with the federal agents every night. But in reality, they are. And in reality this shows us that Portland mayor Ted Wheeler, like Democratic mayors across the country, at the end of the day don’t necessarily exercise as much control over the police forces as they’d want us to think and so they end up commanding the police to do things that the police simply do not do. They do not account to the mayor here in Portland. In many cases it seems that they are more accountable to Donald Trump because that is who ordered this occupation, that is who is enforcing it with his – as many people here are describing them “Gestapo.”

So there are a lot of questions being raised in terms of the actual power that is wielded by these supposedly progressive Democratic mayors and whether or not they will be able to effectively resist this – what is increasingly looking like a fascist occupation – through a brand of liberalism that looks more and more unable to get the job done.