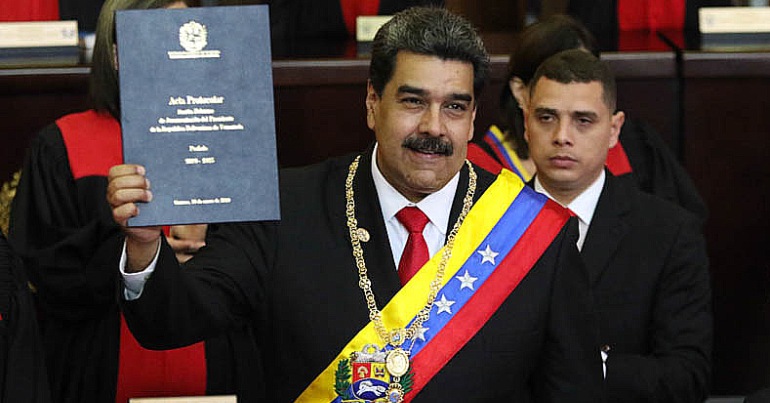 Venezuelan president Nicolás Maduro recently confirmed that his government has made contact with Norwegian counterparts so they can resume their role as a mediator in dialogue between his government and Juan Guaidó’s hardline opposition faction. Guaidó is the US-backed leader of the coup in Venezuela. The move shows that there is, and always has been, a peaceful way out of the political conflict that’s been roiling the country since the beginning of the coup attempt in January 2019.

But you wouldn’t hear this from Trump administration officials in Washington, their puppets in the Guaidó opposition faction, or their mouthpieces in the corporate media. They would have you believe that dialogue is impossible. Yet the reality is that this narrative has always served as an empty and dishonest façade to portray the US-backed coup strategy as the only way out of the conflict. And that’s the last thing that the coup supporters want the public to clue up to.

On 29 July, Maduro said that his government’s communications minister Jorge Rodriguez had met with a Norwegian delegation to discuss the possibility of resuming talks. An earlier dialogue had begun in 2019, with Norway serving as a mediator, but later collapsed after Guaidó allies in the Trump administration tightened lethal sanctions against the beleaguered South American country.

On 24 July, Norwegian foreign minister Dag Halvor indicated on Twitter that a group of his country’s government officials were in Caracas. He said that they were there to obtain an update about the political situation following over 18 months of turmoil caused by a US-backed coup attempt launched by Guaidó, a member of Venezuela’s radical opposition faction.

The development has received little attention in the corporate-owned Western press. But this should come as no great surprise. The Guaidó faction’s tactic has always been to make excuses as to why dialogue somehow won’t work. It claims, for example, that dialogue is just used as a pretext to “stall for time”.

But upon closer examination, this is clearly nonsense. The Guaidó faction wants to dismiss dialogue not because it thinks it won’t resolve the political crisis, rather it’s because negotiations would mean having to compromise, as opposed to being able to seize power outright. And this, in turn, would pose a threat to the interests that motivate the Trump administration’s support for ‘regime change’ in the first place.

The US openly flaunting its self-interested motives

Far from hiding this self-interested motivation, former national security advisor John Bolton spoke openly about how the coup attempt’s purpose was to install a government that would be more favorable to US oil companies. During an interview with Fox News, Bolton stated nonchalantly:

This statement essentially summarizes what anti-imperialist commentators have always argued. Namely that Washington’s claims that it’s motivated by a desire to ‘restore democracy’, or by concerns over human rights, are completely bogus. Rather, US foreign policy has always been motivated by what’s in the geo-strategic interests of its foreign policy establishment, and what’s in the economic interests of its major multinational corporations.

To be sure, this reality is obvious when one contrasts the US’s treatment of Venezuela and other enemies with its treatment of countries that do serve its interests. The most obvious example in the region is Honduras. The US accepted the 2017 election of Juan Orlando Hernández despite the fact that it was widely denounced as fraudulent, even by the pro-Washington Organization of American States (OAS). The OAS usually supports US-backed coups (like it did in Bolivia), yet called for a fresh election in Honduras (which, of course, hasn’t taken place).

Nonetheless, it’s still refreshing to hear it from the horse’s mouth. And for this reason, the Trump administration can at least be credited with being more candid about what motivates its foreign policy than its predecessors.

This must provide little comfort, however, to Venezuela’s civilian population. According to research conducted by Jeffrey Sachs and Mark Weisbrot, US sanctions that have been imposed as part of the coup strategy have led to the deaths of tens of thousands of people. The sanctions have also compounded an economic crisis sparked by falling oil prices in 2014.

A heavy burden, therefore, falls on independent media outlets like The Canary to provide an alternative to the corporate media’s dishonest parroting of Washington’s self-serving falsehoods. To be clear, it has overwhelmingly been Guaidó’s hardline opposition faction that’s been the unwilling party. And it has been provoked into this strategy by their puppet masters in Washington. Shortly before the beginning of the coup, this faction even backed away from an agreement to resolve political differences at the last minute, allegedly at Washington’s behest.

Perhaps most damning of all, moderate sections of the opposition have broken ranks and entered into fruitful negotiations of their own with the government. Last year, moderate opposition parties signed a ‘peaceful coexistence agreement’ with the government that rejects Guaidó’s coup strategy. Clearly, it’s high time the Guaidó faction does likewise. And now that Norwegian mediators are back in the picture, it doesn’t have a single excuse left not to do so.