A petition to parliament is calling for a 'minister for poverty'. Here's why everyone should sign it. - The Canary 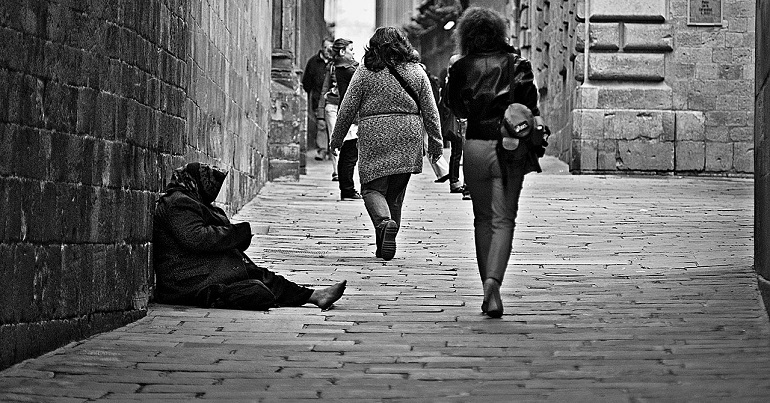 A petition is calling on the government to create a “Minister for Poverty”. In the aftermath of the initial phase of the coronavirus (Covid-19) pandemic, it seems like it’s needed. But the stain of poverty on the UK stretches far further back. And the person who started the petition believes that “poverty is no longer a luxury we can afford”.

Ray Barron-Woolford is an author, activist, and playwright. Among other things, he runs the We Care community outreach project. He also wrote a play and a book about Kath Duncan, a Scottish political activist. Now, he’s launched a petition. It says:

It is estimated over 10 million people in the UK are in poverty, and that the effects of poverty cost £78 billion a year. We believe poverty places a central role in inequality in the UK, and that establishing a Minister for Poverty would help tackle poverty and the inequality it can create.

You can sign the petition here. It’s call is perhaps more urgent than ever.

As The Canary previously reported, the pandemic has caused a surge in people experiencing food and financial problems. The National Food Strategy noted that:

there have been 3.3 million new claims for Universal Credit since March 16th, 9.3 million employees have been furloughed and a further 2.4 million people have applied for the Government’s Self Employed Income Support Scheme. By October, when the furlough scheme comes to an end, the Office for Budget Responsibility estimates that 1.6 million more people will have been made redundant.

It also found that:

A Food Foundation survey conducted in early April 2020 found that 8.1 million adults had experienced some kind of food insecurity during the previous five weeks.

This ties in with figures from the Independent Foodbank Network. It said the number of foodbank users rose by 135% in May 2020, compared to May 2019.

Meanwhile, as the Observer reported, nearly a fifth of households with children did not have enough food to eat in the five weeks leading up to May. It also noted that:

of the 621,000 children who were accessing free breakfast clubs before the pandemic, only 136,000 are being provided with an alternative. However, 31% of children entitled to free school meals are still not getting any substitute, leaving more than 500,000 children going without.

But these figures come against a backdrop of over a decade of worsening conditions for poor people in the UK.

The Canary has extensively documented these issues. As it previously reported, before the pandemic there were around 14 million people living in poverty in the UK. Of those, 8 million were working, 4 million were children, and 2 million were pensioners. In February, analysis by the New Economics Foundation (NEF) found that in the three months leading up to Christmas 2019, most of us were poorer than we were in 2008.

So, is a minister for poverty such a far-fetched idea? Possibly not.

Otherwise, across the developed world there seems to be a reluctance to recognise the problem of poverty via an official government department. And there’s probably a reason for this.

Many analysts believe that poverty and inequality are automatically built into our corporate capitalist system. For example, as Geoffrey M Hodgson wrote for Evonomics:

Capitalism builds on historically-inherited inequalities of class, ethnicity, and gender. By affording more opportunities for the generation of profits, it may also exaggerate differences due to location or ability. Partly through the operation of markets, it can also enhance positive feedbacks that further magnify these differences. But its core sources of inequality lie elsewhere.

Hodgson goes on to explain:

The very commercial freedom of workers denies them the possibility to use their labour assets or skills as collateral. By contrast, capitalists may use their property to make profits, and as collateral to borrow money, invest and make still more money. Differences become cumulative, between those with and without collateralizable assets, and between different amounts of collateralizable wealth. Even when workers become home-owners with mortgages, the wealthier can still race ahead.

Poverty is systemic within our species and society. And for a government to acknowledge that would be an admission of guilt on its behalf. It’s much easier for those in power to claim poverty is somehow transient; that it ebbs and flows depending on what way the economic wind is blowing. But if you apply corporate capitalist logic to that argument, then any government’s goal should be the eradication of poverty and inequality. Because if coronavirus has shown anything, it’s just how fragile the system is when people’s spending power is reduced.

During the pandemic in the UK, our Gross Domestic Product (GDP, a measure of the size of an economy) contracted by 20.4% in April, the biggest fall in a single month on records. As BBC News reported:

The contraction is three times greater than the decline seen during the whole of the 2008 to 2009 economic downturn.

This shrink was in no small part down to most consumerism coming to a grinding halt. And it would have been worse, if it hadn’t have been for government interventions. As BBC News noted:

So the economy has shrunk 20%. How come the other 80% is still standing?

In large part, thanks to the extraordinary levels of state intervention propping it up.

More than one in four UK workers – some 8.9 million – are now on the government’s furlough scheme that allows them to receive 80% of their monthly salary up to £2,500.

The scheme has cost £19.6bn so far, while a similar programme for self-employed workers has seen 2.6 million claims made worth £7.5bn.

Without these schemes, household consumption, which makes up nearly two-thirds of the UK’s GDP, would have fallen even further.

That’s how precarious the corporate capitalist system is. If people stopped spending, and governments did nothing, the whole thing would collapse. By that logic, you’d think it would seem prudent that governments also aimed to eliminate poverty permanently. Because if people had more money, they’d probably spend more, increasing company and shareholder profits, and ultimately building a country’s wealth. But that’s not how the system works.

Corporate capitalism relies on scarcity and demand. If everyone had access to everything they wanted at cheap prices, then there would be no market competition and no profit margins. Restricting some people’s access to products, services, and essentials ensures that the markets keep turning, that wages don’t become over-inflated, and that those at the top remain super-rich. As the blog the Spectre of Communism wrote:

global poverty can be ended with $175 billion (Harack 2011) which is less than 1% of the total annual income of all the richest countries in the world combined. Global poverty can be ended with money, but the root cause is the structural incentives and procedural dynamics of market economics. Simply put, there is no incentive to end poverty… it’s just not profitable.

Why ruin something that works so well? So meaningfully eradicating poverty is not on most governments’ agendas. But, a nudge in the right direction with a minister for poverty would mean the issue would be thrust into the public eye. And it would reignite the debate surrounding inequality and the causes of poverty.

Poverty: a ‘luxury we can no longer afford’

I do not believe that food vouchers are the way forward to tackle food hunger and poverty in 2020. If nothing else, coronavirus has shone a bright light on global (not just UK) inequality. Governments, including the UK, must appoint a minister for poverty. They would oversea how every area of policy impacts on poverty – from health, education, housing, business and overseas aid. A Joseph Rowntree Foundation report for my book Food Bank Britain stated the true cost of poverty to our country and all of us is £78bn a year. Poverty is no longer a luxury we can afford. We must move beyond ‘end poverty’ hashtags and sound bite politics, and make real change happen now.

Poverty isn’t going to be solved overnight. It will either take a mass mobilisation of communities, or action from government. But a minister for poverty is a huge step in the right direction. By forcing the government to admit there is a systemic problem, we can also start to have public conversations about how to fix it. So, everyone should sign the petition now.