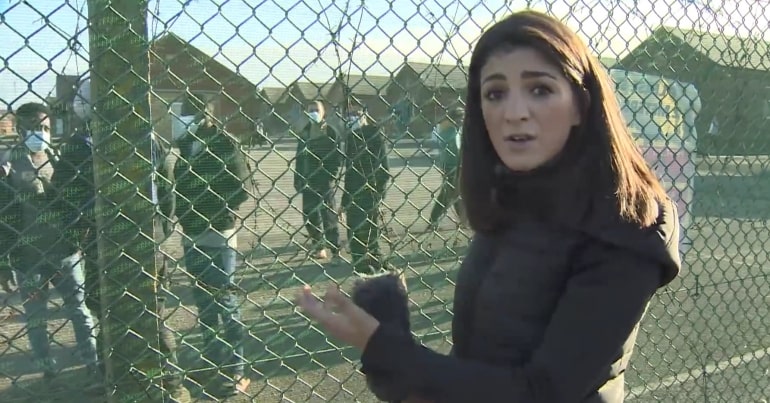 Over 400 UK asylum seekers are being ‘accommodated’ in conditions said to be unsanitary, overcrowded, and degrading, according to a new report by Shadia Edwards-Dashti for RT.

‘Worse we than anticipated’

In Napier Barracks | Asylum seekers reach boiling point, Edwards-Dashti reports from Folkestone, Kent where a former military housing block has been repurposed. Asylum seekers told the journalist, at times on condition of anonymity, that the beds are infested with bugs, residents have been self-harming, and that they are only permitted to leave the facility for two hours a day.

We had heard before going to investigate Napier Barracks that the situation was grim, but the desolate and eerie atmosphere certainly was worse than we anticipated.

The barbed wire and tall brick walls give off a very militant vibe, if not a detention centre- and for some of these men fleeing persecution that certainly can be detrimental to their mental health.

But almost every asylum speaker we spoke to that day said it was worse and the conditions were prison-like, and when you are fleeing authoritarian or war-torn countries that can be very triggering. It was very reminiscent of the scenes we saw on the American border during Trump’s presidency, locking up human beings in cages. It was sickeningly similar.

Refugees are not criminals

The film notes that the Home Office does not consider these people to be “criminals”, they are human beings “seeking protection” who “are not being detained”. The barracks are not considered to be a detention centre but rather a form of temporary accommodation for people waiting for their claims to be processed.

But when Edwards-Dashti attempted to speak to residents of Napier Barracks, through the chain-linked fence when some of them were in a courtyard, security officials warded them off. “The security say ‘no’, you can see, I need to talk but the security say ‘no'”, one of the residents tells Edwards-Dashti, before he is moved away from his side of the fence by a security officer in a blue bib.

Mobile phone footage taken from inside the barracks also shows what appears to be blood on the floors and on bedsheets, cramped living spaces, and a series of arguments between security and residents.

Edwards-Dashti says in the report:

There have been reports of protests and hunger strikes against the conditions. We’ve also heard allegations of rampant self-harm

Video taken from inside the barracks appears to substantiate the claims of protests.

The report also notes the existence of a confidentiality agreement, backed by the Official Secrets Act, which visitors must sign if they’re given access to the facility. Visitors are therefore prevented from speaking to the public about what they see inside the barracks.

It’s important for people to recognise that asylum seekers have left desperate situations, possibly fleeing persecution and oppression, they should be welcomed with open loving arms, not treated like criminals

Readers may recognise the countries of origin, and be at least somewhat aware of the direct or indirect role UK foreign policy has had upon them. These include Iraq, Iran, Sudan, Afghanistan, Syria, Eritrea, Palestine, Somalia, and Kuwait.

In terms of the barracks itself people must not compare the experience of the asylum seekers to soldiers who have inhabited them in the past. First of all, we are in the grips of a pandemic, and these guys are sharing quarters with 30 other men. By the government’s own laws, you can be fined £10,000 for a gathering of that size. Second of all, just because these men have come seeking asylum doesn’t mean that they are only entitled to the bare minimum. These guys are in tiny shared rooms and they are only allowed to leave once a day. They are constantly monitored like they have committed a crime, yet they have done nothing wrong.

At one point in the film, Adam Yassir, originally from Sudan, attempts to deliver food and clothes donations to the refugees but is prevented from doing so by security. Yassir, who is himself a refugee and runs a charity for other people like himself, now has to set-up in the park across the barracks for people to come to him during their brief time out. Yassir has provided support to the residents there since the facility was opened up in September 2020.

At one point in the report, police arrive in response to an alleged “incident” and they can be heard questioning Yassir and Edwards-Dashti. When the two ask the police what the alleged incident was, they change the subject. Ultimately, with no evidence of a crime, the officers leave.

Community reaction was on ‘both ends of the spectrum’

Edwards-Dashti told The Canary that “we did survey the local community a bit while we were there”. “The reaction was on both ends of the spectrum” she explained, including “sympathetic and compassionate opinions understanding asylum seekers plights and genuinely pleased they had a roof over their heads”. Although she added that “the majority were unaware of just how dire the conditions are under that roof”.

Not everyone shared the “compassionate opinions” Edwards-Dashti described, however.

“It’s no good, mate” one construction worker tells Edwards-Dashti, “they need to control it. Put them somewhere else, or send them back”. His colleague adds, “If you wanted to go somewhere to better for your family’s life, you’re gonna do it, but if you’re coming over here raping girls and doing other things like that committing crimes it’s no good”.

But then we witnessed the most hostile and aggressive far right rhetoric, fanning the flames of hate. I know racism exists but this was not even a race matter, this was sub human sentiment being spouted. Online, there has been a lot of anti-migrant reaction to our documentary saying ‘they should be sent back’, ‘they are illegal’, ‘they want 4-star hotels’ etc.

The Home Office was repeatedly contacted for a right of reply. Despite a government spokesperson promising to return with a response to the allegations in the report, no reply was received by the time of publication.