Important wins for Bristol rent strikers, but the fight has only just begun - The Canary 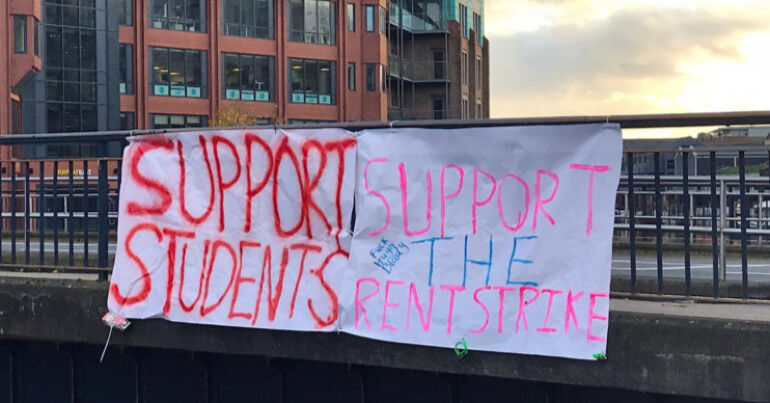 As the first term of university comes to an end, the battle for fair rent continues.

If coping with coronavirus (Covid-19), isolation, and dismal employment prospects with an increase of redundancies wasn’t enough to worry about, now students are forced to take strike action over halls of residence that they can’t use and no longer need.

In one of the largest rent strikes in 40 years, students are fighting for 30% rent reductions for the academic year, amongst other essential needs. Action started after students were dishonestly promised a blended learning experience involving in-person and online teaching.

Shortly after thousands of students moved into newly paid halls, they were met with a swift change of plans and told that their studies would instead consist of mostly online teaching and little, if any, in-person teaching at all.

University of Bristol told The Canary:

We have always been clear about our plan to offer a blend of online and in-person teaching. This blended learning provision has been created to keep students safe during the pandemic.

One month on since Bristol University’s Board of Trustees rejected students’ reasonable proposal for a 30% rent cut, no penalty contract releases and refunding international students’ £800 deposits for their rooms if they can’t take them up, there was some progress.

@BristolUni have put the lives of students and staff at risk by bringing students to halls, so we're calling a rent strike.
These are our demands ✊ pic.twitter.com/7VT2OVqpKh

The UK government set out a schedule for students wishing to return home during Christmas by opening a travel window from 3 to 9 December.

Near the end of November, according to a member of Bristol Rent Strike:

Bristol University’s change of heart may not have happened without strike action and other universities’ influence on the same debate.

As The Canary previously reported, around the same time as Bristol University’s decision, the University of Manchester announced it would be granting students a 30% rent reduction for the first semester.

Meanwhile, students at other institutions including Cambridge University, University of Nottingham, Goldsmiths, Sussex, and Oxford have joined in with their own rent strikes.

Solidarity with the hundreds of students on rent strike, from Bristol and Manchester! ✊ 🚩@RentStrikeBris@rentstrikeUoMpic.twitter.com/deXFhZejAZ

There is no way [Bristol] University would have done this without pressure from the strike and seeing the damage to Manchester Uni’s reputation. However, we do not believe that this piecemeal concession from the University is enough.

Whilst the University uses the language of 30% reduction, this is strategically done to seem as if they are meeting our demand for the whole year. Some students will be away from halls until the end of the Government’s travel window on 7th February. For this rebate to be meaningful, the University should be giving us a 100% rebate until the end of this period since large amounts of students will not have access to their halls.

Many students feel there’s a pattern of deceit, and that the institution is prioritising its reputation over helping students with important issues affecting them:

We are winning more and more, but we will continue to strike through January until the University gives us a 30% rent reduction for the whole year and no-penalty contract releases.

Mistrust of governing institutions is nothing new, as a recent survey reported by The Canary showed. Results show nearly two in three students don’t think the government is acting in their best interests and that it hasn’t adequately considered the difficulties they may face as a result of coronavirus.

And to add even more fuel to the fire, Bristol University has only just scraped through another mess in which it threatened to revoke bursaries from some of the most disadvantaged and low-income household students taking part in the strikes:

All the student anger is directed at Uni management and in our first letter that we sent to them we cited a breakdown in trust which led to the need for the strike in the first place. The Uni’s actions from the bursary scandal to lying in the media about us and not being willing to listen to students has just made that breakdown of trust much worse.

But once again, because of activist determination, Bristol University switched their attempts to stop students’ bursaries:

We got the Uni to U-turn their decision. The Uni also sent to anyone who gets the accommodation bursary they get an extra £350. We don’t think [this] would have happened if not for the action of the strike.

We are extending an additional bursary to care leavers, those estranged from their families, and students already in receipt of an accommodation bursary.

The additional package of support for students in halls up to the start of next term alone will total over £6.5million, including rent rebates, extra bursaries, the provision of free food boxes (other unis have charged for these) to self-isolating students, cleaning supplies and laundry services.

The National Union of Students released a report last week highlighting the dire impact of coronavirus on students’ mental health and wellbeing in England.

In a sample poll of 4,193 students, findings show that although physical needs are being met, mental health and wellbeing needs are not. Since the beginning of the term in September, students’ mental health has worsened with many claiming they are “not getting enough sleep”, experience low self-esteem and achievement, and that loneliness from limited interaction with others has caused a huge impact on their wellbeing.

52% of respondents answered that their mental health is worse now compared to before the pandemic and that students were also feeling “anxiety and panic attacks”, “stress and worry”, “depression”, struggled with “not seeing family”, and struggled with the fact they can’t see or make new friends.

This year has impacted everyone in numerous ways. And for the freshers who set out to start a big milestone in their lives the pressures of becoming an activist in the first few weeks of study is a challenge, to say the least.

In some cases the decline in students’ mental health has been devastating. Students at Manchester University have voiced their tension and frustrations at the lack of support during coronavirus lockdowns and poor living conditions in student residences.

In a recent BBC Three investigation, students’ welfare and university support were examined after the death of first-year student Finn Kitson, who’d just started his studies at the University of Manchester.

“Come back when you have had more severe symptoms”

A final year student who is a part of Bristol Rent Strike said that strike activism, coronavirus, and the whole ordeal of studying has caused their mental health to suffer:

It’s been quite difficult to be honest, I’ve not been in the board meetings but with negotiations it sounds like the university are just trying to seem like they are doing everything they can and we should almost be grateful because we haven’t had to pay for food boxes.

It’s still not an acceptable response when people were not receiving them, or they couldn’t actually eat anything from it because of various dietary requirements. It was insulting. We know that they have the funds to deal with it. It has just been one thing after another having to deal with it.

And when it comes to mental health and wellbeing services at Bristol University:

The Uni has sent some texts around and there have been cases of students who were promised check-ups who didn’t get any. From the meeting they announced that there would be a compassionate case by case contract release scheme. You have to apply with evidence for you to get released from the contract and I remember thinking at the time they clearly haven’t learned anything from all the mental health problems that there have been in the Uni.

I had problems accessing mental health support at the Uni with massive waiting lists and some of my friends were told that they couldn’t access the support quickly because they weren’t mentally ill enough basically being told go away and come back when you have had more severe symptoms or something disastrous has happened.

When asked about mental health support for students, University of Bristol told The Canary:

[We] Introduced a new policy to reflect the fact that it is better for some students’ physical and mental health not to reside in University accommodation. Students who are affected in this way will be released from their tenancy penalty free.

A wide range of mental health and wellbeing support is available to all students. In addition to our existing services, we have introduced new online wellbeing resources, have adapted services so they’re able to provide support via phone and online, and extended access to our Wellbeing Access service which is now open 24/7.

But despite Bristol University’s new online resources, the National Union of Students report:

Over three in five have not sought support, suggesting a lack of awareness or availability of who or what can help them.

Action for change in the new year

We're launching our January Rent Strike ✊
Uni of Bristol students sign up here https://t.co/YWQXytgw8d
We've already won £3.6 million for students and no repercussions but we can win more
It's time for @BristolUni to stop prioritising Hugh Brady's salary and put students first pic.twitter.com/Y66yok8pY8

Students are fighting back despite the odds and during tough times of hardship. Bristol Rent Strike is preparing for the future and is hopeful for more change in 2021:

The most important thing is the board said there are no financial repercussions and so we can continue the strike. We’ve got over 200 strikers that are going to join us for their January rent payment and considering it’s the government window where everyone is travelling home, we are expecting to get much more support when people have less on their minds.