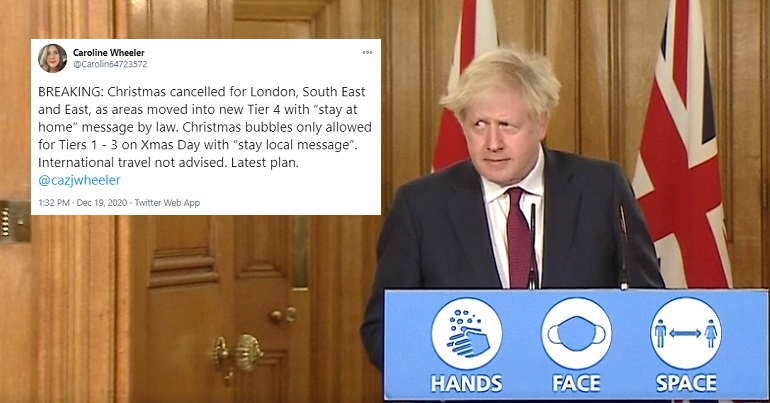 The Tories appear to have leaked the controversial ‘Tier 4’ plans to a journalist whose main Twitter account is “out of order“. Because well before Boris Johnson announced more stringent pandemic restrictions, Twitter knew the full details – courtesy of a Rupert Murdoch editor. But this editor shared the news via a “secondary” account. All in all, the chaos is peak 2020.

Looking at the time stamp, it appears Caroline Wheeler was one of the first journalists to share the details of the government putting London, the South East, and the East of England into a Tier 4 category of restrictions. The Sunday Times deputy political editor tweeted at 1:32pm on 19 December:

And as we now know, Wheeler’s news was indeed correct. But what was curious about the situation was that she tweeted it from what one journalist called a “very suspect-looking” account. Other people on Twitter noticed this:

Why is Caroline Wheeler of the Times tweeting from an account that looks as if it's a bot?

Many big journalists retweeting this right now. Note the account has only one tweet and claims to be Caroline Wheeler, Deputy Pol Ed of the Sunday Times. While what it suggests seems realistic, let's wait for some corroboration. https://t.co/v3wVJaO9r6

Govt incompetence aside, the very suspect-looking acct breaking the news does belong to Caroline Wheeler. I emailed her Sunday Times address to check and she confirmed it. #CovidChristmas pic.twitter.com/DXx119GSsZ

Wheeler herself confirmed this:

Sorry for any confusion over my account. I’m locked out of my normal account @cazjwheeler as it’s linked to an old email. Please @TwitterSupport can you sort it out? Have been asking for help for months…

So, what’s the issue?

sorry, they’ve leaked the news to a journalist who’s locked out of her own account? this country is a joke

That Caroline Wheeler didn't tweet for an entire year! Then suddenly is on Twitter, having to use a secondary account to spread the Governments leaks for them. Outrageous, embarrassing and transparent asf.

Wheeler’s tweet, and the subsequent flurry of other Westminster journalists repeating the details, is full-on “client journalism”.

What a bunch of clients

Client journalism is where the government uses reporters for its own agenda. Peter Oborne wrote about this for openDemocracy. He noted an example where both BBC and ITV political editors Laura Kuenssberg and Robert Peston quoted an unnamed government source in 2019. Here the news they put out was, as Oborne said, “fake”, with no basis in fact. But the two corporate journalists pushed it anyway.

Oborne explained why this happens. He said corporate media outlets:

yearn for privileged access… And they are prepared to pay a price to get it.

This price involves becoming a subsidiary part of the government machine. It means turning their readers and viewers into dupes.

This client journalism allows Downing Street to frame the story as it wants. Some allow themselves to be used as tools to smear the government’s opponents. They say goodbye to the truth. Social media has provided new ways of breaking the boundaries of decent, honest journalism.

But the situation with Wheeler and that tweet is even more batshit, for want of a better phrase.

The UK has become accustomed to the Tories leaking info to journalists like Kuenssberg and Peston. It is par for the course in a world where the notion of a free press hasn’t actually existed for decades. Or, as Noam Chomsky called it in 1988, the idea of Manufacturing Consent – where the media serves to further the interests of the establishment class. But for the Tories to leak the Tier 4 info to a journalist with no functioning main Twitter account is bizarre.

Were they trying to make the ‘is Wheeler’s account a bot or not’ the story? Did they not realise she didn’t have access to her main Twitter account? Who knows. Interestingly, the Sunday Times article on Johnson’s announcement was by Wheeler and Pogrund. It was published at 6pm on 19 December. And it pushed the Tories’ line that the “mutant coronavirus” strain was to blame for Christmas being cancelled.

But the leak in itself, and then the press conference, created panic in London and an exodus of people from the capital. Overall, events on 19 December summed up this Tory government: incompetent, chaotic, farcical but still pretending it’s in control. And they also summed up the establishment corporate media: servile and lickspittling to the bitter end.

Featured image via the BBC – YouTube and Caroline Wheeler – screengrab