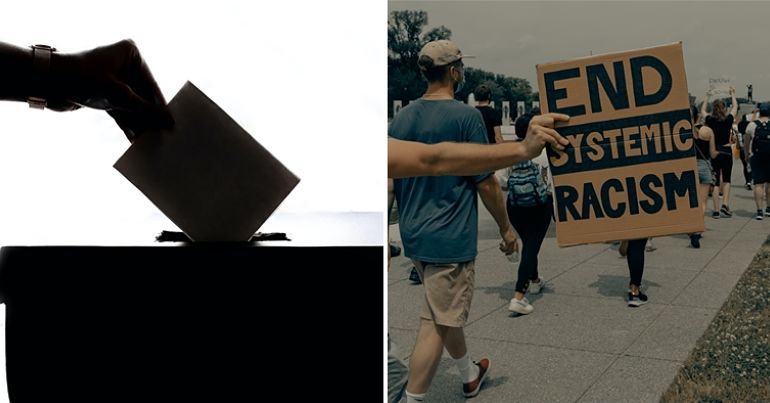 The Canary‘s #Independence2021 series explores issues relevant to independence in Scotland and Wales in the run up to May’s elections. And this week it’s exploring racial diversity in Wales.

So, we spoke to Niki Jones, the founder of YesCymruBAME, and Leila Usmani, a development worker with Race Alliance Wales (RAW). Usmani is also the lead researcher and author of RAW’s report Do the Right Thing.

Among the many takeaways in this feature is the need to prioritise racial equality in this May’s elections. Because based on the findings below, we’ve got a lot to do in very little time.

Jones told The Canary that YesCymruBAME is about “opening conversations between communities”. She believes this means everybody can feel more comfortable discussing independence in an “open and safe way”. In terms of the upcoming election Jones said, personally speaking, she’d like to see political parties “take racism and racial inequality seriously”. And she’d like to see them “take a proactive approach”.

And indeed the picture could be even bleaker. Because as reported by The Canary on 12 January this year, Mohamud Mohammed Hassan died after being released from police custody in Cardiff. Police released Hassan without charge, and witnesses claim he’d been severely beaten.

Then, on 17 February in Newport, Moyied Bashir died after police officers were called to his home. While Bashir was not under arrest, police handcuffed him and applied leg restraints. He died shortly after going to hospital.

Bashir’s death is currently being investigated by the Independent Office for Police Conduct (IOPC). Campaign groups are calling for justice.

Christopher Kapessa drowned in Rhondda Cynon Taff in July 2019. And when the Crown Prosecution Service (CPS) said it wouldn’t bring manslaughter charges against a 14-year old suspect, his mother accused it and the police of institutional racism.

This is borne out by 2017 research. The University Partnerships Programme (UPP) funded research showed:

10.3% of Black students drop out of university, compared to 6.9% for the whole student population

experiences of overt racism, bias and active exclusion in professional and educational settings, including evidence of unequal pay

Its research also highlights the importance of education. It recommends:

To combat lack of understanding of public and political life, education in Wales must improve its provision of socio-political education, via formal as well as informal means such as community-led education.

In January this year, RAW:

That report – Do The Right Thing: achieving equity in racialised representation in public and political life in Wales – highlighted:

significant and complex barriers which racialised people in Wales have faced when considering or seeking public or political roles.

Additionally, a lot of respondents referred to the:

And discrimination isn’t always so overt. Because respondents have also experienced:

stereotypes, assumptions and tropes, particularly in the form of microaggressions. One respondent was told ‘[you’re] not like others – why can’t others be like you?’

they had changed their appearance [29%], with many censoring opinions and hiding elements of their personal life when pursuing professional opportunities (47%), in order to fit and belong in Wales, for example females actively deciding to not wear traditional clothing.

Others spoke of dumbing themselves down, of not wanting to upset white people, and of being left feeling ‘whitewashed because of … what I’ve had to do to fit in’. 69% reported discrimination due to their name or background, with 46% saying they had changed the way they speak.

So to address these issues and “to increase representation in an anti-racist Wales”, the report calls for societal changes. It also wants to see encouragement of racialised communities to participate in public life. To do so, Usmani told The Canary we need to:

decolonise these institutions and systems. And one of the key elements of that decolonisation is a recognition that we shouldn’t have to just fit the mould, that shouldn’t be the only way that racialised people should be able to enter these spaces safely.

more active sanctions to be in place for breaches of equality law…although some elements of it [the Equality Act] can be robust in terms of preventing discrimination…people get away with it with a simple apology and pledg[ing] to do better, but clear sanctions are in place as would be if someone broke other laws.

Political parties themselves need to start utilising positive action…to drive quotas for racialised people…to drive targets where quotas may not be legally plausible because there is a caveat in [the Equality Act] that you can only have quotas for gender but not for any other protected characteristic.

She reiterated the point made in the report’s recommendations that:

People in public and political life in Wales must embody the fight for the rights of racialised people, as well as the rights for people of different genders, trans rights, LGBTQIA+ rights and rights for socially disabled people, moving away from single strand approaches to genuine intersectional equality.

Elections can shape a discourse

While the fast approaching elections might not change the racial landscape in Wales, it is an opportunity to change the discourse. And as the next elections in Wales take place in May 2022, that discourse could get more time to develop.

*The authors of the report “have moved away from using this term due to it not sitting comfortably with most people and have instead opted to use the term ‘racialised’, acknowledging the process of active racialisation by the perceived White majority in the world. More explanation is given in the full report“.