‘People are calling us, crying for help’. Heartbreaking tweets expose how 15 people were left to drown in the Mediterranean. - Canary Workers’ Co-op 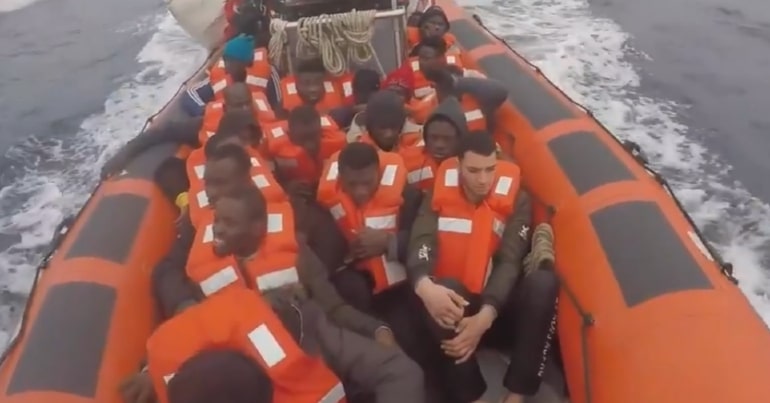 As coronavirus continues to dominate headlines into 2021, mainstream news coverage of the refugee crisis has gone from poor to non-existent. We rarely read about the people stuck on Lesbos or Samos, and we barely hear about those who are so desperate to get out of Libya that they are willing to gamble with their lives. But these people still very much exist, and racist Europe is still willing to let them drown rather than provide them with a home.

More than 170 people have already died in the Mediterranean this year. And at least 15 people drowned in the early morning of Sunday 28 February. They were attempting to escape from Libya and find safety in Europe. Alarm Phone – a hotline that people call when they get into distress on the Mediterranean – received a call from people on a rubber boat carrying around 125 people. Their boat was deflating. Without Alarm Phone, many more would likely have died. The activists tweeted at the time:

🔴ONGOING SHIPWRECK OFF #LIBYA!
Tonight we were called by 125 people on a rubber boat. They said the boat was deflating, that people were in the water & they urgently needed rescue. They seem to be just 8km from the coast but the so-called Libyan coastguard refuses to intervene!

The volunteers called the Italian, Maltese, and Libyan authorities. Their tweets are harrowing to read:

8:40 CET
People are calling us, crying for help. Where is the rescue? 5 people are in the water now. They see a big vessel, but it is not assisting them.
Five hours after our first alert no rescue in sight! #BlackLivesMatter

After first delaying an operation, the so-called Libyan coastguard went to the boat and suggested that they had rescued all people in distress. This is a lie. Survivors state that at least 15 people have drowned.https://t.co/zMe6CgSywU

The 363 people on board the Sea-Watch 3 are now receiving medical care. Numerous rescued people showed fuel burns, dehydration symptoms, hypothermia and are struggling with seasickness. In addition, there are the physical and psychological consequences of their previous detention in Libyan camps.

Although the Sea-Watch volunteers have saved hundreds from drowning, at the time of writing this article, the ship is still awaiting authorisation to dock in Sicily. Hugo Grenier, head of mission on the Sea-Watch 3, said:

Yet again, Europe turns a blind eye while people are drowning and civil sea rescue organizations do their best to put an end to the dying at sea. While this year alone, more than 170 people have already lost their lives in the Mediterranean, Europe is doing everything it can to prevent us from rescuing them. Every person has the right to be rescued, no matter which passport they carry. The people on board have the right to a safe port, and we need it now!

Rescue ships continue to be prevented from operating

Rescue ships’ operations continue to be blocked by the Italian government, and the Sea-Watch 3 was prevented from operating for seven months. Meanwhile, its sister ship, Sea-Watch 4, was detained for six months, after the Italian authorities argued that there were too many life jackets onboard, and that the ship’s sewage system wasn’t good enough. On 2 March, news came in that the Sea-Watch 4 has temporarily been freed.

As the Italian authorities continue to block Sea-Watch’s ships, the organisation is taking legal action, and the case has been referred to the European Court of Justice. Sea-Watch said:

In its ruling today, the Administrative Court granted our request to suspend the blockade pending the European Court of Justice’s decision.

A positive judgement could end politically motivated port state controls and does not only concern our Sea-Watch 4: It would be an important step against arbitrariness of authorities and for legal security of all NGOs active in the Mediterranean.

The organisation certainly isn’t the only group targeted by the authorities. On 1 March, Italian police carried out an operation on the organisation Mediterranea Saving Humans, which runs the Mare Jonio rescue ship. Homes and social centres were raided, and the ship was searched.

Everyone deserves freedom of movement

Between 2014 and 2019, the International Organization for Migration (IOM) reported 33,686 deaths and disappearances of those attempting to migrate. Almost 200 have died in the Mediterranean in the first two months of 2021 alone, while more than 3,500 have been forced back into unsafe conditions in Libya. Let’s not turn our backs on people who need our solidarity. Everyone deserves freedom of movement, and the freedom to live without fear.