BBC News couldn’t let Budget day go by without an insidious piece of pro-Rishi Sunak propaganda. Not that this boot-licking is anything new. Unless you’ve forgotten the Beeb’s ‘Superman Sunak’ fiasco.

Who is Rishi Sunak?

On Wednesday 3 March, BBC News decided it would be good to have some softcore Sunak arse-licking. So, it released a short video. BBC Politics shared this with the title:

Who is Chancellor Rishi Sunak and what does he believe?

People on Twitter had previously answered the question of ‘who Sunak is’: namely a privately educated Oxford graduate / former banker who married into wealth:

This is how we celebrate social mobility in England https://t.co/jvIqhtVGuE

But of course, BBC News couldn’t just say that. So instead, it put out a puff piece on the chancellor. And it essentially painted him as an ‘OK guy’:

"He immediately struck me as somebody that was going places"

The video did mention his “gilded” background. And one contributor called Sunak’s social media a:

And it noted Sunak was, according to the contributors:

But overall, BBC News‘s video was little more than a cuddly look at a man who, however you dress him up, is a Tory. He’s one who’s left some sick and disabled people in dire straits. Sunak is a man who’s ignored the plight of the so-called three million “excluded” people. Yet BBC News even went as far as to push the idea Sunak could one day be PM.

So, what do you call this rancid piece of BBC propaganda? Rachael Swindon had an idea:

…And that was a political party broadcast for the Conservative Party

And as one Twitter user also said, it’s “client journalism”:

“Client journalism” is where the government uses reporters for its own agenda. Peter Oborne wrote about this for openDemocracy. He noted an example where both BBC and ITV political editors Laura Kuenssberg and Robert Peston quoted an unnamed government source in 2019. Here the news they put out was, as Oborne said, “fake” with no basis in fact. But the two corporate journalists pushed it anyway.

Of course, the BBC has done this for Sunak before. Who can forget it mocking him up as Superman, before promptly deleting it? 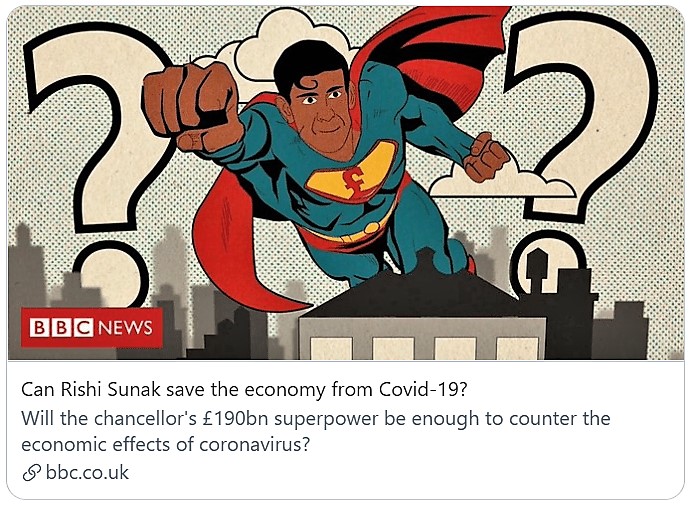 This latest BBC video, with its upbeat music, rapid-fire delivery, and glossy production reeks of client journalism. What the public needs on Budget day is critical and unbiased analysis of Sunak and his policies. It doesn’t need yet more pro-government propaganda from the BBC posing as something informative.

Featured image via Flickr – Ministry of Housing and pixy