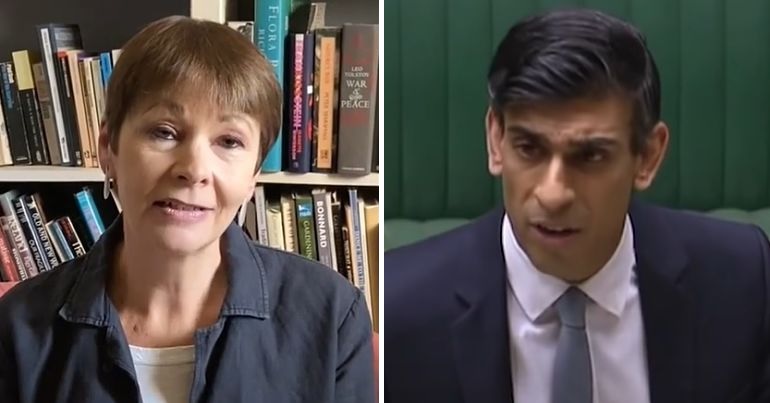 Rishi Sunak promised to do “whatever it takes” to support people and businesses when delivering his 2021 budget. However, our society is amid climate and biodiversity crises that threaten its very foundation. So what we really need is an economic plan that offers ‘whatever it takes’ to support the planet and pull us back from the brink.

In this Sunak totally failed to deliver, as the Green Party’s Caroline Lucas made perfectly clear.

Saying it doesn’t make it true

As the Guardian reported ahead of the budget, many saw it as “a vital test of Boris Johnson’s green credentials”. The government has repeatedly claimed to be creating a “green industrial revolution”. It also loves to describe itself as “global leader on tackling climate change”. So many people who care about whether the planet remains habitable (that should be everybody) were keen to see if the budget lived up to those grand claims. As Greenpeace’s head of politics Rebecca Newsom said:

This budget is the government’s opportunity to finally show it can walk the walk, and is willing to implement change as well as call for it.

It didn’t ‘walk the walk’. Indeed, the Guardian‘s round-up of the “key points” of the budget could only find three green announcements in it. Sunak announced that a green recovery bond will support green projects and that the government will reform the Bank of England’s mandate to include net zero emissions targeting. The chancellor also announced that it will set up a new national infrastructure bank in Leeds. As economic justice campaigner Richard Murphy pointed out, though, this wasn’t quite the innovation Sunak painted it to be:

Sunak claims he is creating the first ever infrastructure bank – except we had one until the Tories sold it. #Budget2021

Upside down and back to front

Lucas was less than impressed with what Sunak had to offer on the climate. She called out the government’s decision to freeze fuel duty:

As expected, increase in fuel duty cancelled. Translation: increased emissions and less money for green spending. In a climate emergency we need investment in public transport. Not cuts for fossil fuels #Budget2021

She also pointed out that, although duty on dirty fuels won’t go up, the government hasn’t subjected public transport prices to similar caps. Lucas argued that this is entirely incompatible with a shift to a green society:

Freezing fuel duty since 2010 means climate emissions are up to 5% higher than they would have been. Also comes at cost to Treasury of over £11bn for 2019/2020.
Meanwhile rail fares rise – how is that compatible with shift to Green society? #Budget2021

Crucially, the Green Party MP highlighted the chancellor’s focus on “growth” in the budget. That focus was such that the Guardian led with Sunak’s plans for growth in its round up of key points. But as Lucas said, growth is the wrong “economic goal” amid the climate and biodiversity crises:

Growth is the wrong economic goal for a green and fair recovery – even if you call it ‘green growth’. Now is the time to redesign the economy to address inequalities & tackle the climate crisis. We need a #WellbeingEconomy – not business as usual with green spin #Budget2021

As a number of economists argue, the obsession with growth and Gross Domestic Product (GDP) is a major reason why we’re in this sorry ecological mess in the first place. So politicians who continue to carry that torch aren’t at all fit for the challenges we face. That includes Sunak, and his Conservative government, as this budget shows.