The G7 is coming to Cornwall. But so is resistance to it. - Canary 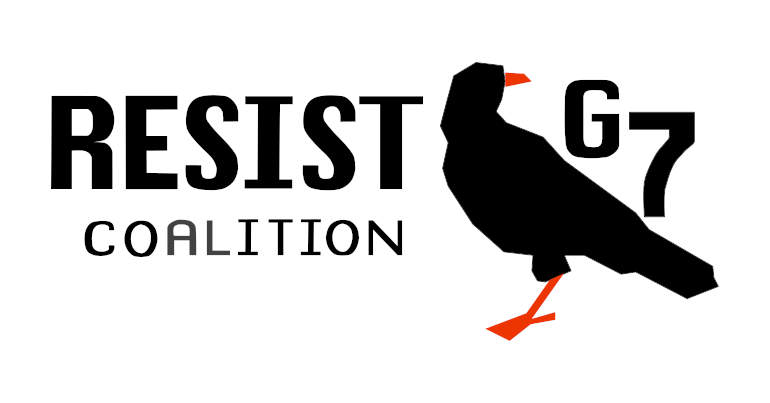 You may have already heard that the G7 is being hosted at a luxury beach resort in Cornwall this June. The G7 is made up of some of the world’s richest and most powerful industrialised countries: “the UK, US, Germany, France, Canada, Italy, and Japan”. The bloc was previously the G8, before Russia was booted out.

The annual meeting is designed to maintain our unequal global capitalist system, where a handful of leaders in the Global North dominate the Global South – as well as the rest of us.

But while UK mainstream media and NGOs are gushing about the opportunities that the summit will bring, a coalition of activists has launched to oppose the G7 and everything that it stands for.

The Resist G7 Coalition, made up of various groups and communities, is calling for international days of action, from 11-13 June. It’s also calling for a real – or virtual – big day of action on 12 June, although exact plans will depend upon the coronavirus (Covid-19) situation. The coalition respects a diversity of tactics.

The group also plans to organise a counter-conference, “aiming to create a legacy of resistance and alternatives for Cornwall and beyond”.

This isn’t about opposing one summit. It’s about building on and creating a legacy, of showing what’s possible when diverse groups come together and start organising the world we want to see. We believe in a world where we put people and planet before profit, where justice means justice on a global scale, where wealth is shared equally and not pocketed by the 1%. Our world should not be a play thing for the rich. It belongs to all of us. And it’s down to us, the people, to stand together, to resist, and to create the future we want to see. The world leaders at the G7 aren’t going to do it for us. The system needs changing. And if we want change, we have to act.

Resist G7 argues that by protesting against the summit, it will be taking a stand against global capitalism, which creates “vast inequalities” both in the UK and around the world. The coalition argues that capitalism:

is [a] system that is seeing our NHS sold off to the highest bidder, that allows people to queue in the snow for foodbanks while pandemic contracts worth billions are siphoned off to friends of government ministers.

Globally, [the pandemic] has exposed inequalities in health care. Those richest nations setting the agenda at the G7 have already brought over 50% of the world’s vaccine supply. Vaccine apartheid is happening with pharmaceutical companies putting profit before world health, backed by the nations of the G7.

The coalition argues that it’s these G7 nations that are responsible for the vast majority of arms sales:

They have a vested interested in upholding the system that facilitates weapons being sold to other murderous regimes to kill and repress people around the world. And it is this system that enforces the borders which people have to risk their lives crossing to flee from the bombs G7 countries have sold.

Others will, no doubt, be protesting the G7 leaders for wrecking our planet, and for causing irreversible climate change.

While the local police and crime commissioner has said that the summit will be a “huge opportunity” for the South-West, local people know better. Thousands of police, as well as the military, are likely to be deployed to the area, while freedom of movement for locals and tourists alike will be severely restricted. The summit, which has previously boasted 2,400 delegates from all over the world, will bring significant additional risks of spreading coronavirus.

The Canary spoke to Francesca (not her real name), who is part of Resist G7. She said:

I live and work in Penzance. I intend to protest when the G7 come to Cornwall. I have no confidence in a global system which supports growing personal wealth for a few individuals while so many are living in poverty.

Government figures from 2019 showed that one in six children live in poverty in Cornwall. In St Ives (the town next door to Carbis Bay where the G7 will take place) a staggering 36% are estimated to be living in poverty. These figures will surely be larger now due to the effects of the pandemic on jobs. This is on the doorstep of the G7 Summit but will go unseen unless local people highlight these issues themselves. Compare that to the personal wealth of Jeff Bezos who owns Amazon and became the first person whose net worth exceeds $200bn. He has made massive profits while others struggle.

Redistributing the wealth of the richest people in the world could solve the problem of world hunger, but governments are committed to serving the rich.

Boris and co. are no doubt hoping to be comfortably wined and dined in Cornwall. But rest assured, there will be resistance and it won’t be quiet.