Meghan Markle's interview with Oprah sparks controversy, and it hasn't even aired yet - The Canary 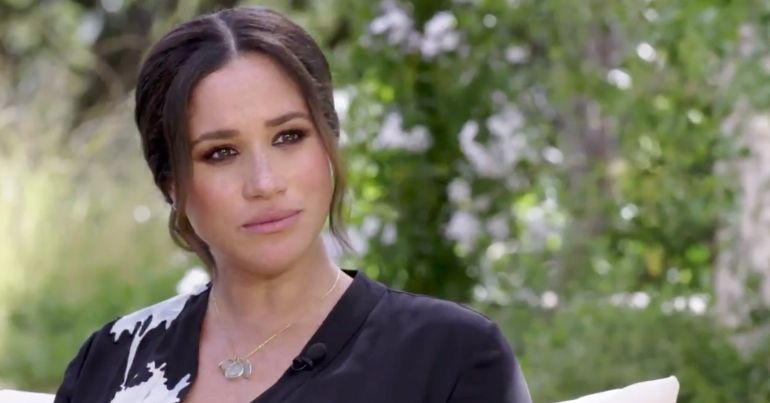 Meghan Markle and Harry duke of Sussex’s interview with Oprah Winfrey has sparked controversy and racist rhetoric in the mainstream media. And that’s before it’s even been broadcast.

What’s race got to do with it?

The Times published a story accusing Markle of “bullying” and tenuously linking her earrings to the murder of journalist Jamal Khashoggi. This soon took off on social media, with long-term Markle critic Piers Morgan commenting on the accusations. Some may deny that this attack on Markle’s character has anything to do with race. But – from absurd headlines to racist tweets about her newborn baby – Markle has endured overt and covert racism since the announcement of her dating prince Harry and joining the British royal family.

As the Guardian’s Catherine Bennett said:

Comedian Munya Chawawa summed up the farcical headlines the British press has come up with to attack Markle over the years in this sketch:

How the British press come up with Meghan Markle headlines 🥴🗞#meghanmarkle pic.twitter.com/ksy7qb0lHa

Misogyny in the media

This isn’t the first time establishment press has harshly scrutinised a woman who’s joined the royal family from the outside. As one Twitter user highlighted, the British press “hounded” princess Diana to her death:

I’m no royalist but the way the media are going after a man’s wife in the same way that killed his mother is utterly grotesque.

A clip from the couple’s interview with Oprah reveals that prince Harry is keen for this history not to repeat itself:

In his interview with Oprah and wife Meghan, Prince Harry says his “biggest concern was history repeating itself”. pic.twitter.com/E8QfYZuEm1

What about Prince Andrew?

Others took to Twitter to compare the media coverage of sexual abuse allegations against prince Andrew to Markle’s treatment. Prince Andrew has received scrutiny for his friendship with convicted sex offender Jeffrey Epstein. Yet he’s received considerably less criticism in the media and has maintained the support of the Royal Family. The Canary’s editor-at-large Kerry-Anne Mendoza had this to say:

The entire media is putting Meghan Markle on blast WHILE AN ALLEGED SEX OFFENDER REMAINS IN THE ROYAL FAMILY, UNCHALLENGED.

Meghan Markle has been attacked by elements of the media ever since she first dare appear on the Royal scene, esp from white men like #PiersMorgan & anti-feminist white female journalists. What is her crime, exactly? Does she roll with paedophiles? 100% misogynoir. #MeghanMarkle

If only the press and Piers went after Prince Andrew for being an alleged paedophile as much as they go after Meghan Markle for being … I'm guessing a woman of colour?

Hanna Ines Flint expressed her outrage at the situation, saying:

I just wanna know where are all these aides fessing up about Prince Andrew being best mates with a sex trafficker, paedophile and serial rapist. https://t.co/Alt0buiDdR

What about the royal family and British politicians?

Others highlighted that the media has let other members of the royal family and British politicians off the hook for more concerning allegations. Dr Meenal Viz said:

I'm glad that UK media is finally taking an interest in the questionable ethical decisions made by royals!

– The Queen lobbied for change in law to hide her private wealth.

An institution that for hundreds of years has turned a blind eye to men’s bullying, predatory behaviour is to investigate the first black woman to join the family. Dear Buckingham Palace, you need to fire your strategist. https://t.co/KEeh9qnxVv

Wait until the newspapers, thick with synthetic fury about Meghan wearing a gift from Mohammed bin Salman in 2018 read this speech in support of him given by Boris Johnson that same year. https://t.co/mTC8mOQ98Y

The fact that the Royal Family facilitated the sale of £10.3 billion worth of weapons to the Saudi gov over the last decade, while it bombed the world's poorest people in Yemen and drove them into starvation, is infinitely more important than anything Meghan Markle is doing.

White men sharing their expertise on the matter

As ever, a group of white men took the opportunity to chime in on whether Markle is a “bully”:

5 White Men discussing how Meghan Markle killed Khashoggi with her ear rings, bullied people like the Home Secretary, & has scared the living daylights out of the establishment without having said anything, yet

Another Twitter user instantly shut down the Metro’s suggestion that Morgan should interview Markle and her husband:

Media bias against women of colour

Mos-Shogbamimu shared a video arguing that “bully” accusations have historically been used “to demean, dehumanise and silence Black women”:

'Bully' has colour. Strong Black & bi-racial women of Black heritage are ALWAYS labelled 'bully'. That's why Royal Family a.k.a The Firm & British media use it as smear tactic on Meghan Markle. My book #ThisIsWhyIResist explains why. Don't pretend you don't know #OprahMeghanHarry pic.twitter.com/9GTuyQvwV5

The lengths to which mainstream media will go to undermine and discredit a Black woman who dares to speak out are astonishing. The media’s treatment of Markle is symptomatic of racism in the UK and reflects the insidious nature of misogynoir.

We only need to look at the character assassination of MP Dianne Abbott, or or Nick Ferrari’s suggestion that journalist Afua Hirsch should leave Britain if she’s offended by racism…”, to see how the British public and mainstream media make examples of successful Black women who challenge the status quo. This sends a message to Black women that if they intend to be in the public eye, they must be prepared for harassment, defamation, and harsh scrutiny.

Meanwhile, Black women are under-represented in journalism, over-represented in those receiving online abuse, and under-protected in both instances. The British public and mainstream media need to get with the times. And they must work to root out anti-Blackness, inherent bias, and white supremacy in all their forms.