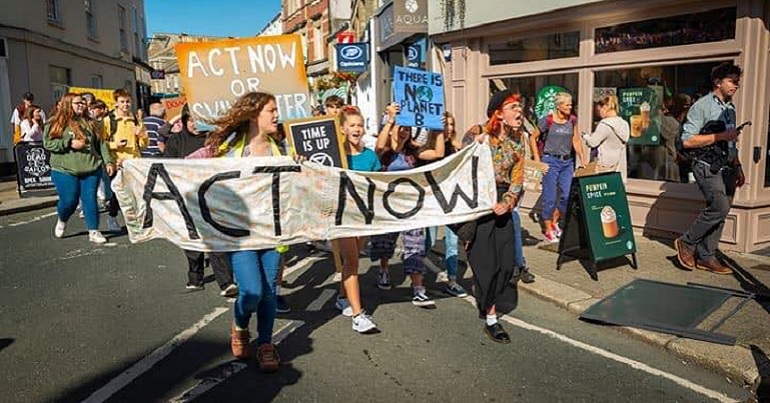 A youth movement is taking a stand against one of the biggest events in the global capitalist calendar. And it’s not doing things by halves. Because its series of direct actions are bold and getting straight to the heart of the issues surrounding the so-called “G7”.

The G7 is coming

The Group of Seven (G7) is having its annual summit in Carbis Bay in Cornwall between 11-13 June. The government calls the G7 the “world’s leading democracies”. In reality, it’s the world’s leading corporate capitalist crooks and imperialists. As The Canary previously reported, the ‘grown ups’ have already been out in force against the G7. But now, young people are taking the reins.

The Cornwall Youth Climate Alliance (CYCA) os one of the groups taking action. Its aims are very simple. As it states on its Facebook page, it is:

The Canary spoke to 15-year-old TJ, who is part of CYCA. It’s always impressive when young people take direct action against the biggest threats our species and planet face, and Gen Z more broadly seem to be aware of these issues. TJ told The Canary that she thought the establishment should be “scared” of her generation:

I think Gen Z have a far larger awareness of the state of society than previous generations, due to social media and the online world. Especially over lockdown, we’ve seen a different method of activism that came from the internet. In many cases I’ve learnt things online that would never be seen in mainstream media. Gen Z definitely have the ability to change the world. Movements like Youth Strike 4 Climate have shown what young people are capable of when we unite together. We are capable of everything, and they should be scared of us!!

The G7 should be scared, Because on Sunday 30 May, CYCA are holding another demo. Once again, it’s aimed at the G7.

Taking to the streets

At 2pm, the group has organised a protest in Truro. Details are here. As CYCA says on its Facebook page:

We are calling on Cornwall to send a message to the leaders, to demand real climate action now, no more empty promises and justice for those in most affected areas.

Join us on Sunday 30th May at 2pm in Truro for a youth led protest to demand climate justice now! Please remember masks and social distancing!!

G7 leaders, we are watching you.

The group said in a press release that:

This Sunday we are taking to the streets to make it clear that the G7 leaders will not be welcome in Cornwall unless they provide us with real decisions and policies for climate justice.

With the upcoming G7 summit taking place in Carbis Bay in… two weeks, youth climate activists across the world want to send a message that they are watching. Decisions and lack of action by the G7 leaders will have a devastating impact across the world.

But if the G7 leaders thought this was the end of the youth demos against it, then it’s very much mistaken.

The action in Truro is building up for the return of the #FridaysForFuture school climate strikes. And this year, the first post-pandemic one is being held in Cornwall – right at the beginning of the G7 meeting:

G7 is coming to Cornwall, England this June.

They will be talking about many things, one of them being climate action… that is why #FridaysForFuture will be hosting the FIRST-EVER #ClimateStrike (in England) since lockdown on June 11th, Cornwall. #NoMoreEmptySummits pic.twitter.com/Yvi3ZTiQeO

Of course, the G7 is central to the climate crisis that has unfolded. TJ told The Canary:

The G7 do not exist to benefit the people or the planet. But rather their interests lie in upholding the system that ensures inequality will always be present. Their priorities lie in ensuring they make maximum profit, not caring for the planet. Our leaders continue to supply meaningless, green-washed, empty promises because it’s the cheap and easy option. But that just won’t cut it.

They are flying-in on environmentally damaging planes; dining in expensive restaurants, and making small talk as they are waited on hand and foot. Yet people in the Global South are suffering. They are facing the worst effects, despite not being the countries to produce the emissions. This is the G7’s responsibility. It’s their emissions and lack of action that are causing extreme flooding and food crises. Yet they continue to do nothing about it.

The more people resisting the G7 the better. Because it’s not just climate crisis that the group is driving. As Nick Dearden from campaign group Global Justice Now wrote:

When world leaders claim they’re coming together to create a more equal, peaceful and sustainable world, it’s important to judge them on their actions rather than their rhetoric. The truth is that these leaders represent the countries most responsible for driving global inequality, arms sales and climate change. Unless they’re prepared to break with corporate interests and big-business-first policies, they will continue pushing the world into the abyss.

‘Changing the world, together’

So, CYCA’s resistance is crucial for Cornwall and also globally. But TJ told The Canary that despite Gen Z’s consciousness, some people may still be unsure of what the G7 is really about. So, she has a message for anyone on the fence over whether to protest or not:

If you are someone that advocates for equality and justice, ask yourself if the G7 really want that too. They have proved, time and time again that they do not care for the people, or the planet. Instead, they will exploit poorer countries to maintain their comfort and power. It’s absolutely crucial that we unite and take a stand against colonialist violence, oppression and exploitation. Every young person across the world should stand up and join us to demand a better future for our generation. We have the power to change the world together.